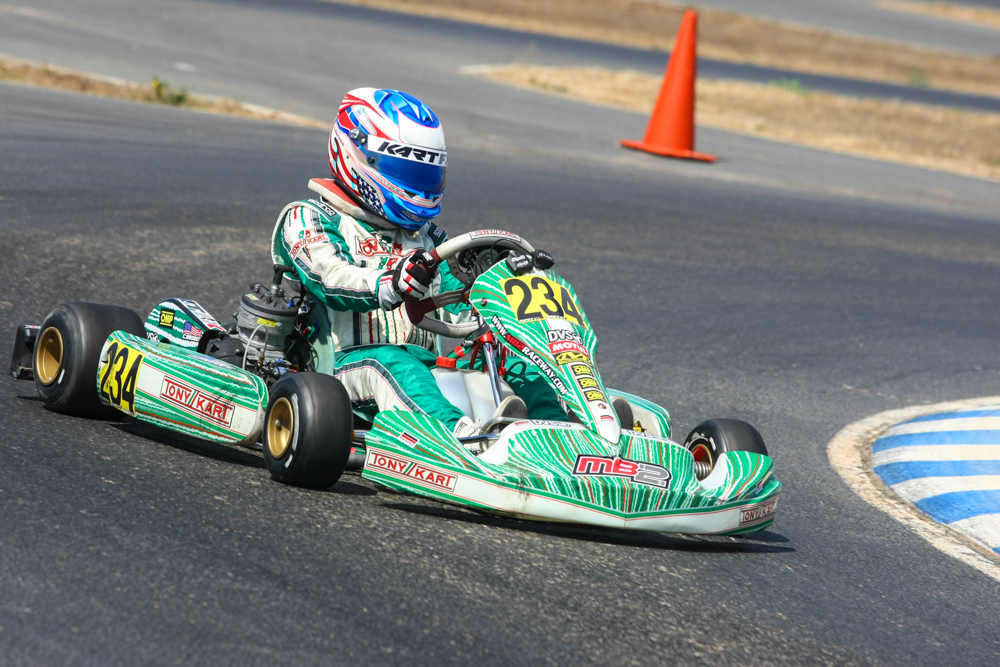 The Motul IKF Region 7 Championship Series brought to you by K1 Race Gear and Bridgestone tires continued ventured north into California’s central coast for races #9 and #10 at the Santa Maria Kart Track. The Santa Maria Karting Association once again hosted the event and as always delivered the two things racers like most, great on track action, and tri tip sandwiches. The number of drivers increased between the last two races as people took advantage of the slightly cooler temperatures that Santa Maria offers compared to the LA basin.

Mike Manning Karting KPV 2 and Fleming Racing Engines KPV1 ran a combined race group. Jake Drew set the pace in KPV2 while down town Trey Brown did the same in KPV1. Drew led Joshua Early to the finish in the heat race while Carson Mallett scored the win over Tanner Hudspeth in KPV1. The finals proved to be a repeat of qualifying with Jake Drew running unopposed to the KPV2 win and Brown bouncing back to score the victory in KPV1. Colin Queen and Elijah Potter completed the KPV1 podium, with Early 2nd in KPV2. 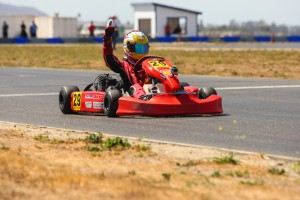 Rylee Martinez was the Henderson Karting Experience Kid Kart pole sitter with a time of 1:07.453 around the long Santa Maria circuit. Her speed continued through the heat race as Dominic Gorden and Cole Keith Cotham battled for 2nd place. The final didn’t go as planned for Martinez as Gorden gained an advantage at the start. Martinez fell back into the field as Gorden was chased by Dylan Johnson. Martinez bounced back for one lap, but the latter stages of the race were dominated by Cotham and Johnson. Johnson scored the win over Cotham and Martinez.

Spec PRD Jr. 2 brought to you by RLV was the largest class of the day and saw Christian Brooks again score the pole position. Chance Skaufel and Nathan Seegrist were just a few tenths off in 2nd and 3rd. Brooks clobbered the field in the prefinal with quick Nick Ramirez clawing his way up into 2nd place. Brooks easily swept the class, leading every lap of the main event. Seegrist gave chase but wasn’t up to the pace of Brook’s #234, having to finish in 2nd place some 8 seconds down on the winner. Noah Garza ran all race in 3rd place and finished there as well. Bad luck for Ramirez saw him out of the contest in the early laps.

Trey Brown just nipped Colin Queen for the pole position in the PKS Rookie Comer class. Brown led the field of eight to the finish in the heat race, but the fight for 2nd place was up for grabs between Queen, Tanner Hudspeth and Marcus Rodriguez. Brown stamped his authority in the final handing everyone a 7 second beat down. Behind Brown is where all the action took place between Queen, Hudspeth and Rodriguez again. Contact coming onto the finishing straight jumbled up the running order. Hudspeth scored 2nd over Queen and Rodriguez.

The Honda Kid Kart class was the local option event for the weekend with Cole Keith Cotham killing it in qualifying over Jordan Rochester. Dylan Johnson joined the duo in the final, but the results remained the same. Cotham nearly lapped the field for the win. Rochester finished in 2nd and Johnson was 3rd. 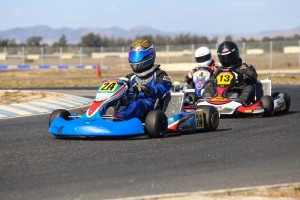 Spec PRD Sr. Presented by RLV and K & P / Nash’s Karts KPV4 took the track as the final race group of the day. Jeremy Specht put 3 tenths on Mike McGinnis in KPV4 qualifying while Jordan Robertson was nearly a second quicker than Tripp Reed in PRD Sr. After a win in the prefinal things fell apart for Robertson two laps into the final as he pulled to the side of the racing surface. Dylan Ito took over the race lead from Robertson, but Kyle Blum was on the charge. Blum passed Ito for the lead a handful of laps later. Once out front Blum checked out for the race win. Ito drove it home for a solid 2nd place finish with Justin Raper moving up to finish in 3rd. Specht and McGinnis had a good scrap in KPV 4 with McGinnis landing the win.

Empire Karts KPV 2 and Fleming Racing Engines KPV1 again combined on Sunday for a single race group. Sunday’s qualifying was a repeat of Saturday with Jake Drew and Trey Brown earning the pole positions. The final too was a repeat as Joshua Early played second fiddle to Drew and Brown outdistanced Tanner Hudspeth and Carson Mallett.

Courtney Concepts Kid Karts saw Rylee Martinez score her second pole of the weekend, just over a tenth ahead of Dominic Gorden. Martinez finished first in the heat race with Dylan Johnson moving up into 2nd place. Martinez went flag to flag for the race win while Gorden and Johnson battled through the middle laps for 2nd place. Gorden was able to keep pace with Martinez in the closing laps, but unable to make a move for the win. 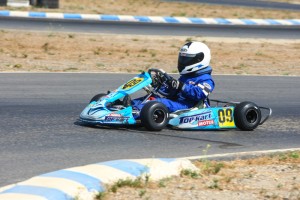 Chance Skaufel and Nick Ramirez both stepped up their games in Sunday’s RLV Spec PRD Jr. Christian Brooks still out qualified them, but barely. That trio continued to lead the charge in the ten lap heat race, and Brooks once again would start the final from the pole position. Brooks lit it up in the final as Nathan Seegrist, Skaufel and Ramirez jockeyed for position behind him. Ramirez’s day ended around halfway as Skaufel and Seegrist gave chase to Brooks. Brooks scored the win and in doing so became the IKF Skip Barber Challenge winner.

Grand Products Rookie Comer took to the track in what would be the most interesting class of the weekend. Downtown Trey Brown again secured the pole position over P2 driver Tanner Hudspeth and P3 combatant Colin Queen. The prefinal saw something new for a change. Tanner Hudspeth scored the win over Brown, setting up a fantastic 20 lap final. Hudspeth took an early lead as Brown, Marcus Rodriguez and Carson Mallett slotted in behind him. For twenty laps they ran in that order, for twenty laps Hudspeth led the way. Hudspeth crossed the finish line a mere tenth ahead of Brown to score a well earned victory, or so he thought. The tech barn was not so kind to our winner, or to the runner up as both Hudspeth and Brown were DQ’d. This handed Rodriguez a big win after running 3rd all day long. Mallett finished in 2nd and Richie Samaniego came away in 3rd.

Jordan Robertson led the charge in RLV Spec PRD Sr. qualifying again with a 51.578. Tripp Reed again qualified P2 with Saturday’s winner, Kyle Blum in 3rd. Mike McGinnis stepped up his qualifying efforts on Sunday to earn the K & P / Nash’s Karts KPV4 pole position over Jeremy Specht by only 0.096. The prefinal saw a few DNF’s including Reed and Robertson. Blum took the PRD win while McGinnis finished first in his class and second on track. The last final of the day saw McGinnis extend his lead on track and score the KPV4 win over Specht. Robertson bounced back in the final, and unlike on Saturday kept it going for all 20 circuits. Blum and Reed battled for 2nd place as Robertson gapped the duo by a handful of seconds. Robertson scored another win, good enough for him to finish the IKF Skip Barber Challenge in 2nd place. Blum finished in 2nd. with Reed and Peter Hudson completing the field.

Special thanks to this weekend’s associate sponsors P1 Engines, Race Kart Engineering, and Tru Tech Engines. The Motul IKF Region 7 Championship Series will be off for a month, but returns in early November for the last race of this year’s series. Join the racers at Adams Motorsports Park November 2nd and 3rd. Congratulations to Christian Brooks, Jordan Roberson and Nick Ramirez for the IKF Skip Barber Challenge. For everything Region 7 please check out www.ikfkarting-r7.com.