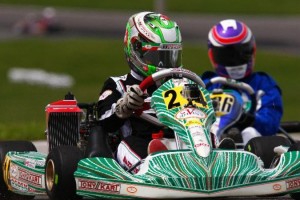 Gianfranco Mazzaferro, a member of the Ferrolati Corse Karting Team, completed a major milestone taking the 2013 ASN Canada FIA Canadian National Karting Championships Junior Rotax title. Now the 13-year-old from Montreal, Quebec has his sights set on the upcoming Eastern Canadian Karting Championships. GF heads into the final round this weekend sitting second in the overall championship title fight. Taking place at the nearby Mont Tremblant Karting Circuit, GF is hoping to carry the momentum from Goodwood in the final round of the six round series. Having already earned a spot on Team Canada and a trip to the Rotax Max Challenge Grand Finals, much of the pressure is off the young rookie. Continuing his world wide pursuit of racing excellence and with little time to spare, GF and tuner Nick Cosco headed to France for the final round of the Rotax Max Euro Challenge just days after taking the Canadian national title. Now back on home soil, GF is able to reflect on the national title and prepare for the final race of the Canadian karting season.

“I was ecstatic to win the national championship, especially as a rookie,” beams Mazzaferro. “I do feel bad how things went down in the final. All my guys on the Ferrolati Corse Karting team did a great job. I want to thank Nick, Richard, Steven and Garett. I especially want to thank Nick for all of his hard work. Our kart was great all weekend and we managed to stay out of the trouble, which in the end, was the difference.”

During the Nationals, GF was able to stay inside the top two spots in eight of nine on track events with the only difference a third place in the prefinal to give himself an inside starting spot. In qualifying GF went second quick to set himself up well for the series of heat races. Then in the heats he was able to take second in all three races setting fast lap in the second and third rounds. This put him on the front row for the prefinal. A nice run to third place put him inside row two for the start of the final.

The final was another good start of GF as he held on for third through the opening corner. The lead duo stretched a gap in the opening laps but made contact on lap three. That let GF through to the lead, which he held until lap 13. A hard charging challenging moved GF to second spot through to lap 16 before being demoted by a resurgent pole sitter and GF. GF would hold onto second through to the final lap. Black and checkerd waving flags signaled to the field that the event was under official review. A post race penalty presented to the first place finisher moved GF to the top spot on the box.

A great story emerged from the weekend as GF’s driving coach, Garett Grist, driver of the DaVinci Foods #7 Andretti Autosports USF2000 car won the Junior Rotax national title as a rookie the last time that the Canadian Nationals were held at Goodwood Kartways back in 2009. The duo were able to repeat that feat as the nationals returned to Goodwood.

“GF had great starts from the outside in all of his heats and drove 30 perfect laps in the final and that’s what it took to win,” comments Grist. “He really picked up his braking points and stayed strong throughout the weekend. I think he is very focused and in great shape heading into the Grand Finals, which is another very long, tough event.”

With only a couple of days to enjoy the victory, GF headed straight to the airport to board a flight to France. Mazzaferro took in the fourth and final round of the Rotax Euro Max Challenge held at the Sologne Karting, in Salbris, France, just two hours south of Paris. A challenging weekend had GF fighting for positions throughout the internationally acclaimed event. He was able to move forward out of the Last Chance Qualifier by taking third place at the line. This had him starting the prefinal in 31st place. In a strong run combined with patient passing, GF moved forward to finish a fantastic 17th place. The final however was short lived as GF was punted from his position on lap three ending his day early.

Now back on home turf, GF will rejoin the Ferrolati Corse Karting Team as the ECKC wraps up this weekend at Mont Tremblant Karting Circuit, just an hour north of Montreal.