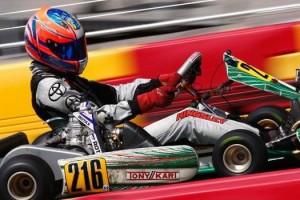 Jeff Kingsley, pilot of the Whitby Toyota TRD Tony Kart, is looking to put a disappointing ASN Canada FIA Canadian National Championships behind him as he sets his sights on this weekends final round of the Eastern Canadian Karting Championship taking place at the spectacular Mont Tremblant Karting Circuit. Kingsley heads into Tremblant with a slight 21-point advantage over second place, an advantage that only improves by one point when drops are calculated. With the final ticket to the Rotax Max Challenge Grand Finals on Canadian soil up for grabs, it will be a weekend of intense racing action. For Kingsley, the Eastern Canadian Karting Championship (ECKC) season has been feast or famine as three podium finishes, including two wins, have been negated by two low scoring rounds.

“It’s important that this weekend at Tremblant we get back to our winning ways,” comments Kingsley. “We have the speed, but just not the results to show for the work we have put into our program this year. The Nationals were a big disappointment for our team. We had been building up momentum heading into the Sunday final and to be taken out so early in the race by avoidable contact is disappointing.”

During the recent ASN Canada FIA Canadian National Karting Championships, which took place at Goodwood Kartways, Kingsley ran consistently inside the top five through the official posted sessions including the third quickest lap in timed qualifying. That qualifying effort was followed by strong and error free runs in the three heat races with Kingsley earning third, first and third place finishes respectively. This put Kingsley on the front row for the prefinal where he took second place to secure a front row start for the final.

Racers were presented with perfect weather for Super Sunday as Goodwood Kartways delivered another incredible week of racing action. A clean get away from the rolling start into corner one saw Kingsley grab the lead. He held point for the first three circuits until contact with a driver attempting to overtake in corner two would send both karts off track. The result was a broken rim that ended Jeff’s day two laps later. Officially classified as 25th in the final posted order, the result did not reflect the speed and craft that Kingsley had display all week long.

“For sure we can carry some the speed from the Nationals over to this week. This is the last shot a ticket to the Grand Finals here in Canada,” commented Kingsley. “We know what we have to do to secure a spot on Team Canada. Our closest competitor has already made it to Team Canada so we have some wiggle room, but not much. With my racing program progressing it’s very important to make the national squad and see what we can accomplish in New Orleans.”

Kingsley and Company hit the track Friday for a full day of testing followed by the final round the Coupe de Quebec on Saturday. Sunday will host the sixth and final round of the Eastern Canadian Karting Championship.