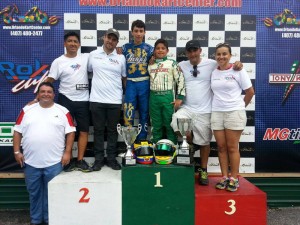 Moving from California to Delray Beach, Florida about seven months ago, Bordogna Racing Engines has made a major impact in not only the Florida karting market, but across North America. Claiming race wins and podium results at the 2013 Florida Winter Tour, Bordogna Racing Engines began to shift their focus and attend many club and regional events throughout Florida. Focusing on multiple different engine platforms, Bordogna found success at the Rok Cup USA Finals.

Around karting since 1975, Daniel Bordogna worked alongside his father building karts and engines while he mastered the skills behind the wheel of a kart. Claiming multiple regional and national championships as well as South American CIK-FIA and Pan American CIK-FIA titles, Daniel would travel to Europe throughout the 90’s working for factory teams participating with his drivers in many European Championship and World Cup events. Retiring from the seat in 1996 and honing his skills as a tuner and engine builder, Bordogna Racing Engines LLC was then founded and headquartered in California.

Leaving the seat and building engines, the success did not stop for Bordogna. Quickly making a name for himself in the engine builder market, the championships continued to build. Claiming national titles in the International Kart Federation, World Karting Association, Stars of Karting, and SuperKarts! USA programs, 2013 would see Daniel and his company achieve success in the Rok Cup USA Finals claiming the national championship in Mini Rok and the vice championship in Rok Junior.

“We are very proud of our results since we have relocated to Florida,” expressed Daniel Bordogna. “With over twenty wins in the regional program at the Florida Karting Championship Series, I knew we had a great chance at achieving titles in the Rok Cup USA finals. With great drivers such as Mathias Ramirez and Sebastian Sierra and strong Bordogna Racing Engines power, both drivers were able to finish on the podium and will join Team USA at the Rok International Finals in October.”

Never focusing on one driver or engine platform and always looking to help all customers, multiple Bordogna Racing Engines drivers would stand on the podium throughout the year. Pole position winner Arias Deukmedjian and Zachery Hollingshead stood on the podium in the final event of the Rok Cup USA program in Orlando, the same class in which Ramirez claimed the national championship only weeks later.

Bordogna, who also provides support and tuning for Rotax powered customers continued, “We had a great year in the Florida Karting Championship Series (FKCS) as well and took home victories at the final round two weeks ago.”

The 103rd Street Motorsports Complex in Jacksonville, Florida would be the home for the final FKCS round of 2013 where Bordogna powered drivers dominated the Cadet Sportsman ranks. Zachery Hollingshead and Mayo Livingston would finish first and second in Saturday’s main event while Hollingshead would pick up his second win of the weekend in Sunday’s Mini Rok final. Ramirez would make it a 1-2 finish for Bordogna in Mini Rok and with the result, managed to secure the series points championship. Sebastian Sierra would claim his second vice-championship of the season finishing second in the FKCS Rok Junior championship battle. One race prior in the series, perennial front-runner Vincenzo Sarracino would take top honors in the Cadet Sportsman category in Ocala utilizing Bordogna power.

“We are looking to build our business and grow the Bordogna Racing Engines customer base, including the Rotax side of the business,” expressed Daniel. “Our success speaks for itself and we will work hard to make sure our drivers are at the front of the field.”

Bordogna Racing Engines is located in Delray Beach, Florida. Bordogna offers an engine rental program, dyno testing, blue printing and maintenance of engines for all classes from Cadets to Rotax to KZ1, as well as flowbench testing and CNC customized parts and accessories for engines. For those looking to get more power from racing engines to get to the front of the pack, contact Daniel by visiting his website at www.bordogna.us, call (916) 256-0385 or email danielbordogna@hotmail.com.