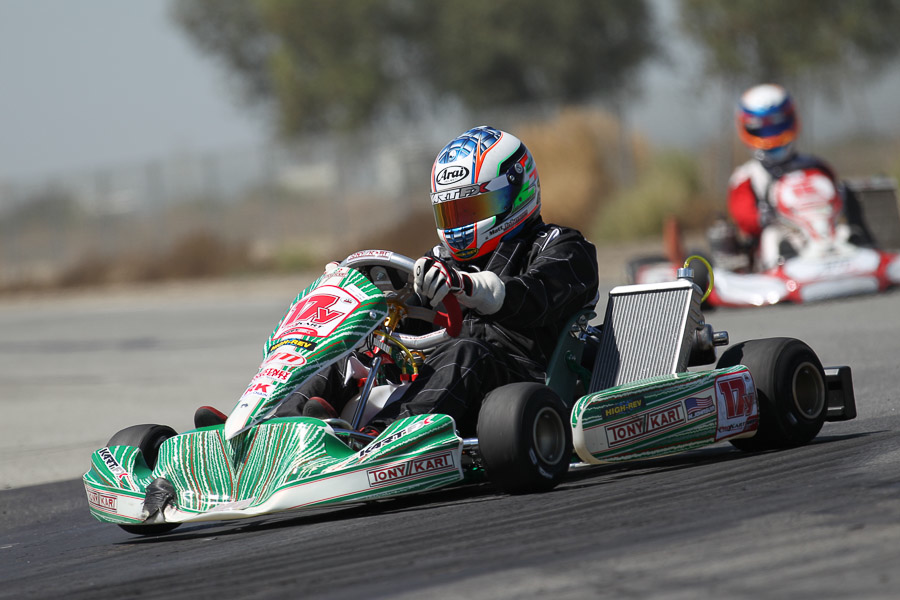 It was a return to action for the California ProKart Challenge program, hosting the fifth round of the 2013 season on September 6-7. The Superkarts! USA regional series returned to the Buttonwillow Raceway Park in Buttonwillow, California for the second time this year, contesting the challenging 7/10-mile course in the opposite direction from the first visit back in February. Aside from the track direction, conditions were very different from the season opener, as triple digit weather tested the top shifterkart and TaG drivers from the western portion of the country. A number of familiar faces stepped up to the challenge to land themselves on the podium, with many securing a solid position for the year-end championship to be decided at the end of the month.

The Pure Karting TaG Senior division began with Austin Elliott scoring the top spot in the qualifying session. He was able to edge out Carlee Taylor by a slim 25 thousandths of a second, with championship leader Jake Craig in third. Heat one ended with a wild finish, as Elliott led all but the final circuit with Alejo Fernandez going from third to first, as Elliott fell to fourth behind Craig and Travis Lowe. Fernandez would then lead most of heat two, until Lowe advanced to the front on the white flag lap and held on to score the win over Elliott, with Craig third. Lowe got the jump on the field to lead the first three laps of the main event until Matt Johnson charged his way from fifth on the grid into the first position. Bringing Craig with him, they demoted Lowe back to the third position. The top three would run that way until the final laps, when Lowe began pressuring the point leader. This gave Johnson enough room to cruise to his first victory of the season. Lowe would work past Craig for the second spot as they completed the podium. Elliott ran fourth, with Chris Cricca earning his second straight top-five finish. 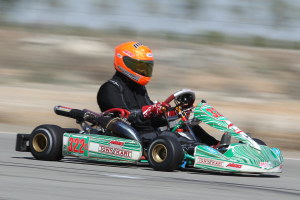 Billy Musgrave made it another perfect weekend to extend his point lead and secure the provisional title in the Extreme Karting/Vemme S1 Pro Stock Moto championship. From qualifying to the main event, it was all Musgrave. Qualifying was a tight battle, however, as he edged out Ryon Beachner and Jimmy McNeil by less than 73-thousandths. In the feature, it was McNeil placing second after a heat one DNF, with former Indy 500 Rookie of the Year Phil Giebler – making his first start behind the wheel in 2013 – third. Billy’s father Willy duplicated the results in the Leading Edge Motorsports S4 Master Stock Moto category, sweeping the weekend. The elder Musgrave led the day from beginning to end, scoring his second sweep performance of the season to extend his championship lead. Rob Logan closed up in the final, placing second with Chris Fosso returning after a two-event absence for his first podium trip of 2013.

The Buddy Rice Karting S2 Semi-Pro Stock Moto class saw another great drive put in by championship leader Connor Wagner. Scoring the pole position in qualifying, contact on the opening lap of heat one with S1 drivers put him on the sidelines and at the back of the grid for heat two. S2 rookie Curtis Paul Jr. took over the reigns, scoring both heat wins as Wagner drove to fourth in the 10-kart field for heat two. Paul held the lead in class at the start of the main while running with the S1 drivers, when he retired after just three laps. This gave the lead to Wagner, who was already running in second. The Texan led the remaining laps to secure his third feature win of the season. Vivek Tandon ran second, with Kyoichi Tsutsui in third on his California PKC S2 debut. 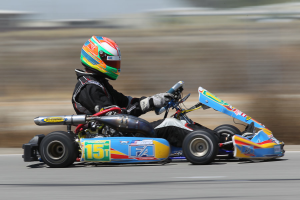 The streak for Billy Cleavelin would come to an end on the weekend, as his win total in the Mike Manning Karting TaG Master class would remain at four. Thanks to Larry Fraser, who made his first California PKC start of 2013, as the NorCal driver scored the feature victory. Qualifying saw Cleavelin not at the top of the time sheet for the first time all year, as Fraser posted the quick lap to secure the spot. Former SKUSA Pro Tour champion Ethan Wilson and Kevin Manning would join the party up front, with Wilson placing first in heat one, and Manning third behind Fraser. Wilson would go on to win heat two, edging out Manning by just 31 thousandths at the line, as Fraser trailed in third. Wilson set the pace in the main event, as Fraser kept the pressure on the entire time. By lap 18, Fraser was able to move back into the lead and held it to the end for the victory. Wilson settled for second, with Manning in third. Cleavelin would retire with five laps to go, recording his first DNF of the year.

The Phil Giebler Racing TaG Junior class also welcomed a new face to the series – and podium – New York driver Anthony Gangi Jr. The SKUSA Pro Tour competitor made his first visit to the California PKC a memorable one, sweeping the days action in the 21-kart field. Gangi became the first driver to do so in the series this year, scoring the main event win by over four seconds. Noah Grey finished second, with championship leader Carter Williams in third. 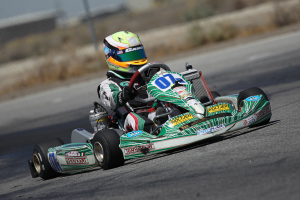 The streak in the SwedeTech Racing Engines S5 Junior Stock Moto division came to an end, with Carter Williams earning his first victory of the season. Point leader and four-time winner Jarred Campbell started out where he left off in June, scoring the pole position in qualifying. A DNF in heat one would put him down the order for the start for heat two, along with Williams who retired early as well. Garrett Dixon was left at the helm, scoring the race win, only to see both Campbell and Williams advance past him in the second heat. Campbell grabbed the holeshot to begin the main event, and led the first 11 laps. Williams was able to slip by for the lead, and from there, held on to secure the victory. Campbell settled for second, with Dixon third.

Jagger Jones became the fourth different winner in five events in the Sunshine Daydream Creations TaG Cadet championship. As has been the case all season, the path to victory was not an easy one. Jonathan Shone was the top qualifier in the class, with Dante Yu second and Myles Farhan third. Jones was back in the seventh position. Through heat one, the top three were shuffled outside the top 10, as New York driver and double SKUSA SummerNationals winner Dylan Tavella came through with the win and Jones in second. Jostling continued in heat two, as Tavella would be the victim, dropping down the order as Tomas Mejia edged out Shone for the race win. Jones would survive to finish third. Shone and Mejia found themselves dropping down the order after the opening lap of the main event, handing the lead to Jones. Once out front, he was able to lead all 15 laps for the victory. Anthony Willis was just a few kart lengths back in second for his first podium of the season, while Tavella drove his way forward to a third place finish. The TaG Cadet Rookie drivers ran within the category, promoting a number of young racers in their first or second year of racing. Colin Queen was the top driver on podium for the Rookies, followed by Jace Denmark-Gessel and Clayton Williams. The updated point standings for all classes from this event will be posted on the website shortly.

The sixth and final stop on the California ProKart Challenge season will take the competitors to the Streets of Lancaster Grand Prix. The two-day event on September 28-29 will see racers from across the western half of the continent battle in the streets of the Southern California city, roughly an hour north of downtown Los Angeles. Many competitors will use the event to gear up for the upcoming SKUSA SuperNationals XVII in November, while the California PKC championships will be decided that Sunday. All event information for the Lancaster race can be found at the website link HERE.

Superkarts! USA would like to thank the following companies, in addition to the support of the class sponsors, for their aid toward the 2013 season: MG Tires, Mothers Polish, Honda/HPD, VP Racing Fuels, Motul, MIR, and AiM. Stay tuned to www.superkartsusa.com for any late breaking news, as well as updates on Twitter at @SuperKartsUSA and at Facebook.