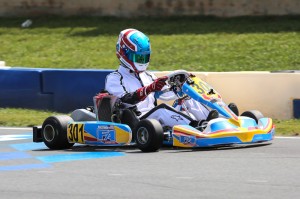 Roger Ralston Jr. showed speed at the Rotax Max Challenge United States Grand Nationals and followed that up with a podium result in Leopard Pro at the USPKS finale
(Photo: Ken Johnson – Studio52.us)

Nearing the end of his busy karting season, Roger Ralston Jr. continues to compete in some of the top series and events that the United States has to offer. With the World Karting Association (WKA) finale and the Rotax Pan American Championships on the horizon, the Kart Sport North America pilot would recently complete the Rotax Max Challenge United States Grand Nationals and the final rounds of the United States Pro Kart Series (USPKS). Showing great speed throughout the events, Ralston was able to turn heads in only his second full season of competition.

Just this past weekend, Ralston Jr. would travel north to Pittsburgh, Pennsylvania and the final rounds of the United States Pro Kart Series. Competing for the first time in the USPKS program, Ralston would see action in the ultra competitive Leopard Pro division. Not racing anything but a Rotax power plant all season long, Ralston would take to the weekend to learn the engine package and become a more versatile driver all while testing for the upcoming SuperKarts! USA (SKUSA) SuperNationals. Wanting to show his speed across a variety of different engine platforms, the Boca Raton resident did just that by the time the weekend had come to a close.

Taking the first few sessions to break in his IAME Leopard power plant, it wasn’t until late in the morning before the FA Kart driver got on the gas for a complete lap. Closing his first unofficial practice session with speed, Ralston was amongst the quickest drivers and looked to turn the wick up the rest of the weekend.

“We progressed through Friday’s test sessions and tried a few things here and there,” explained Ralston. “Some helped the speed of the kart while others did not. Heading to the last session of the day, I knew that we would need to put all the pieces together as it was the first timed session of the weekend.”

With the top-ten drivers within one tenth of a second, Ralston would be comfortably in the top half of the talented field of drivers turning a lap just slightly off the quickest of the session. Confident heading into Saturday’s qualifying session, the rookie senior driver would look to mix it up with the big dawgs of the Leopard Pro division.

Disappointed with Saturday’s seventh place qualifying effort as he knew he had the speed to be higher up the grid, Ralston would go to work when wheel-to-wheel action commenced. Progressing forward throughout the two heats, Ralston would garner enough points to start on the inside of row two in the third position for the day’s main event. Looking to take his first USPKS podium in his first event of the series, disaster would strike in corner one as Ralston’s FA Kart was hit from behind and he was eventually driven over. Taken to the hospital for precautionary x-rays that proved to be negative, the Florida-based driver would return Sunday with a vengeance.

Sunday morning’s qualifying run would be a little different for Ralston as he was the quickest driver of the session. Immediately entered into the top five SuperPole session, drivers and crews were unable to make changes to their equipment and had the opportunity to turn one fast lap to try and take the pole. With the top-five inverted, Ralston would enter the track last and would end the session with the third quickest time and would start the prefinal from row two.

Falling back on the start of the prefinal, Ralston would then experience another issue as his radiator bracket would break and would only be held on by the water hoses themselves. Digging into the rear tire and slowing him down the straights, Ralston manhandled his kart through the corners and fought hard to maintain his position.

Prior to the USPKS finale, Ralston would see action at the GoPro Motorplex in Mooresville, North Carolina. Taking part in the Rotax Max Challenge United States Grand Nationals, Ralston would make the switch to the FA Kart in his quest for the Rotax Senior national title. Testing the week leading up to race week proved to beneficial for the young gun as he was fast right out of the gate. Proving his speed throughout the first two unofficial event days, Ralston would look to carry the momentum throughout the weeklong event.

With qualifying taking place on Thursday morning followed by three heat races Thursday afternoon and Friday, consistency was the name of the game. Qualifying seventh, Ralston would improve in all three of his heat races to finish fourth, second and third, setting up a sixth place starting spot for Championship Saturday’s prefinal. Happy with improvement and speed throughout the week, Ralston was looking for that elusive race win on Saturday.

“We proved to be very fast all week long in Mooresville,” expressed Ralston. “Our kart setup was good for the most part but we struggled on speed in the second half of each race. Narrowing the problem down to tire pressures, I was confident heading into Saturday’s festivities.”

A victim of the outside row, Ralston would fall back one position in the prefinal to claim seventh. Looking to improve in the main event, an engine bog on the start caused a loss of a few positions as Ralston closed the first lap outside in eighth. Working hard to make up for the problem, the 16-year-old began to catch the drivers in front of him before being pushed off the racing surface by an overaggressive driver. Falling back outside the top-ten, Ralston again battled his way forward and would finish ninth at the checkers. Showing speed to run inside the top five, Ralston was disappointed with his results, but felt he gained and learned a lot by racing with some of the fastest drivers in North America.

Roger Ralston Jr. would like to thank Benny Small as well as Brandon and Eric Jones from Kart Sport North America for all of their help and continued support over the last few months as well as his parents for giving him the opportunity to compete in the sport that he loves.