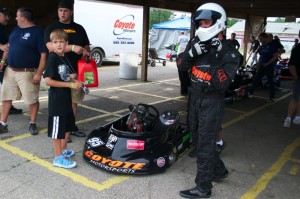 Michael Fauci had a great weekend at WKA Gold Cup at G&J Kartway in Camden, Ohio, in July, winning all three Senior Pro Gas main events and netting over $750 in earnings (Photo: WKA)

Coyote Motorsports racers and teams have been on a roll in the World Karting Association Gold Cup Series and various other local and regional events throughout the country this summer.

Jim and Mark Lipari have hauled the Coyote Motorsports hauler west on two occasions over the past couple months, where they’ve supported and raced with numerous Coyote racers and families from around the country at WKA Gold Cup events.

Coyote racers have wheeled their karts to a total of 11 feature wins in the Gold Cup between July’s event at G&J Kartway in Camden, Ohio, and August’s Gold Cup Grand Nationals at Pittsburgh International Race Complex in western Pennsylvania.

The strong showings at Camden and Pittsburgh, combined with seven wins at Jacksonville, Fla., in March and eight wins at South Bend, Indiana, in May, have given Coyote the point lead in the prestigious WKA Gold Cup Manufacturer Championship standings.

Coyote will now enter the 2013 Gold Cup season closer this October 4-6 at Carolina Motorsports Park in Kershaw, S.C., with a five-win advantage over defending champion Razor Chassis in the Manufacturer standings.

Coyote owner Jim Lipari says the season has been strong, but quickly points to the hard work all the Coyote teams have exemplified throughout the season.

“We’re happy with our position right now, but hats off to all our customers and supporters who have worked so hard to put us in this position,” Lipari said. “So many different drivers have represented Coyote so well this season and carried our banner high. We’ve received great feedback from our racers to help develop the XP chassis and our other models, and it’s been great for me to get back into the seat this year to help with that development. I want to give a shout out and thanks to Ben Wagenhals who tuned for me at Pittsburgh for all his help. Everyone has pitched in, and we’re working hard to continue Coyote chassis as strong as ever heading into the end of 2013 and a fresh start in 2014.”

Ryan Bavineau had a prior commitment that kept him from coming to Pittsburgh until Sunday’s action. When he did show up, Bavineau immediately ran strong, taking fifth in Animal Amateur Medium and a solid second-place run in Animal Medium. Coyote racer Josh Stiefel was in those races, as well, finishing fifth in Animal Medium and seventh in Amateur. Josh also added a fourth-place result in Saturday’s Animal Heavy race.

Michigan’s Cayla Chapman raced the Gold Cup and had to fly out early Sunday so she could attend her first days of college. Chapman raced to a third-place finish in Animal Lite and a sixth in Sunday’s Amateur main event.

Like Chapman, Scott Kleman also had a very important event going on in his life around the same time as the Pittsburgh Grand Nationals. Kleman and his wife were expecting a baby at any moment, and at one point Scott had to withdraw his entry from Pittsburgh because he didn’t believe racing away from his Michigan home would be possible.

Kleman did make it to Pitt for Saturday’s action, and he took a second-place result in Animal Lite.

Jeff Beatty is quietly having a very strong year on his Michigan Kart Supply-sponsored Coyote. Beatty, a newcomer to Gold Cup in 2013, is currently leading the points in Senior Pro Gas and is in line for the new fully-loaded chassis that goes to the class’s national champion.

Beatty had one of his best weekends of the season, finishing ninth in Saturday’s Pro Gas show and picking up a solid fifth-place result in Senior Pro Gas 2. Beatty will look to hold on to the championship at Kershaw and score the upset national title and new chassis, which could be a Coyote!

Also in the Senior ranks, Peter Ilacqua made his first-ever Gold Cup start. Peter did a fine job in his first weekend racing at a national level. He stayed on the lead lap in Saturday’s Senior Pro Gas feature and finished 15th. On Sunday, Peter once again finished on the lead lap. This time he finished 13th.

Tim Stiefel wheeled his Coyote to the win in Animal Masters, and secured his second straight national championship in the class. The Stiefel family continues to be one of Coyote’s and the Gold Cup Series’ best supporters. Tim and his sons Tyler and Josh have each competed in every Gold Cup national in 2013, regularly entering about eight classes among the three of them.

Riley Kelley and Trevor Vargo competed in the Sportsman 1 alcohol divisions on their Coyote chassis. Trevor netted finishes of third and fifth while Riley finished sixth on Saturday and did not race on Sunday. Vargo also added ninth and 10th place finishes in the Sportsman Pro Gas Animal main events.

A large group of young Coyote racers entered the Sportsman Pro Gas divisions, which continue to be a couple of the most competitive divisions in the Gold Cup in 2013. Five of the 15 starters in Sunday’s Sportsman Pro Gas Animal 2 main event were on Coyotes. As mentioned, Nick Fauci finished fourth and Trevor Vargo ninth.

Joshua Stark, Cole Hicks and Zach Turner were in the field as well. Hicks finished ninth on Saturday and 14th Sunday. Stark had a rough weekend with DNF’s in both Sportsman Pro Gas mains. Joshua also ran Sportsman 2 Lite and Heavy, finished fourth and fifth in those races.

Turner is a newcomer to the Gold Cup and earned valuable seat time throughout the weekend. Zach finished 11th in Sportsman Pro Gas 1 and did not finish Sunday’s main after finishing 11th of 15 in the heat race.

Woods, who like the Chapmans and Scott Kleman made the long drive to western Pa. from Michigan, posted finishes of fourth in Restricted Junior, sixth in Junior Heavy and eighth in Junior Medium. Tyler also finished second to Tanner Lee in both Junior Pro Gas Animal main events.

Tyler Stiefel ran runner-up to Dustin Demattia in Restricted Junior in what was a great race. The race came down to the last lap with Dematia edging Stiefel for the victory. Tyler also had strong showings in Junior Lite with a third and Junior Heavy with a fourth. Stiefel also finished sixth in Junior Medium.

Cameron Vargo only strapped on the new Pro Gas Junior Animal and finished third, behind Woods and winner Lee, in both Junior Pro Gas main events.

Congratulations to all Coyote racers who’ve competed this summer, whether its on a national, regional or local level.

Continue to support kart racing, and together lets keep it strong. We’ve seen a lot of new interest in karting this season, new families and racers getting into the sport, and everyone at Coyote is very encouraged about the future.

About Coyote Motorsports
Coyote is one of the original production go-kart chassis manufacturers in the United States. Based in the Rochester suburb of SpencerportN.Y., Coyote is now owned and managed by longtime kart racer Jim Lipari. In addition to chassis manufacturing, Coyote is a full-service kart shop and machine shop capable of in-house manufacturing nearly all of the components on its popular line of karts.