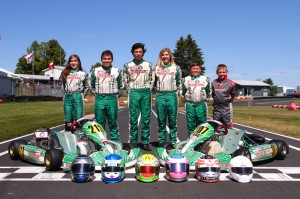 Taking a break from the Eastern Canadian Karting Championship (ECKC), Summit GP would head to the newly revamped Goodwood Kartways for the annual ASN Canada FIA Canadian Karting Championships. With Rotax and Briggs classes on the docket, Canadian national championships were on the line as well as tickets to the Rotax Max Challenge Grand Finals (RMCGF) and the Rotax Micro & Mini Invitational that will be held in New Orleans, Louisiana in mid-November.

“The Canadian Nationals are an event that we as a team look forward to all season long,” explained Summit GP Team Principal Darren White. “Though our complete team results were not as good as we would have liked, our drivers showed speed and gained experience from the event. The competition in the Canadian Rotax community is second to none and I am proud of each and every driver under the team tent.”

Leading the way for the team’s results would be Rotax Junior standout Anthony Tolfa. With his full-time tuner unavailable for the event, Mike Maurini would sub in to tune for the young up-and-comer, and the duo would end the weekend with a third place result. Struggling slightly in qualifying, Tolfa remained consistent through the heat races and prefinal to give himself a shot at a podium result. Running a clean main event, Tolfa would cross the stripe in the fourth position but be elevated to a podium result after a penalty was assessed to a fellow competitor.

Fellow Rotax Junior driver Taegan Poles was well on her way to a top-five result until disaster would strike mid-race and she would see herself on the grass on the exit of the fourth corner. Progressing well through the heats and improving greatly in the prefinal, Poles was in contention before a fellow competitor would make contact sending her off the racing surface. With a kart that was less than stellar to driver post-incident, Poles rejoined the back of the field and drove back forward to an 18th place finish.

Arika White would be the lone Summit GP driver in the Rotax Senior ranks and she was on a mission all weekend long. Showing great improvement from events earlier in 2013, White would run in the top-fifteen throughout the heat races and often had the speed and lap times to run well inside the top-ten. Unfortunately, the female pilot would be involved in an incident in the prefinal that would force her to start from the tail of the talent-laden Senior main event. Mired back in the 28th position, White advanced forward nine positions to cross the stripe the 19th.

Summit GP pilot Dante Lerra would be in tough in the Rotax DD2 field, competing against the likes of regional, national and world champions. Though the DD2 class was not as big as it has been in previous events, the competition level was second to none. When the dust had finally settled and the weekend came to a close, Lerra would garner an 11th place result for his efforts.

Taking no time off, Summit GP will head to Mont Tremblant, Quebec September 13-15th for the final round of the ECKC program. With a single day event on Sunday, team drivers will participate in the Coupe du Quebec program on Saturday to complete testing in preparation for the final event day of the series. Following ECKC action, Summit GP will begin preparations for a trip south of the border to the new NOLA Karting facility in New Orleans, Louisiana. Taking place at the same facility as the RMCGF later this year, Summit GP drivers will participate in the annual Rotax Pan-American Championships as they look to top the blocks and take home the hardware.

For more information about the Summit GP racing team, the OTK and Tony Kart chassis line as well as product sales and arrive and drive programs, please visit their website www.summitgpkarting.com or contact them by phone at 905.377.5845.