The Canadian National karting calendar reaches its conclusion this week as the Eastern Canadian Karting Championship contests its season finale in Mont-Tremblant, Quebec. Teams and drivers are headed to the picturesque JimRussellKartingAcademy alongside famed Circuit Mont-Tremblant for the fourth and final round and class championships are on the line, along with trips to the Rotax Max Challenge Grand Finals as members of Team Canada. Official action gets underway Friday, with the final flag falling on Sunday, September 15th.

While sporting regulations regarding race drops and total points prevent any title from officially being claimed prior to the finale, three drivers have things very much in hand with one race to run. In DD2 Masters, Stuart Clark (Maranello) has had a perfect run through the Finals to date going five-for-five through Mosport, Goodwood and Le Monaco, and piled up 1235 points. The newly minted Canadian Champion is on the cusp of his third ECKC title as well, and has already been confirmed as a member of Team Canada. This means the DD2 Masters ticket will fall to second in the standings, a spot currently held by Francis Mondou (OK1). The IPK Quebec driver has a 65 point cushion over Martin Verville (Haase) as he looks to qualify for the Grand Finals for the first time. 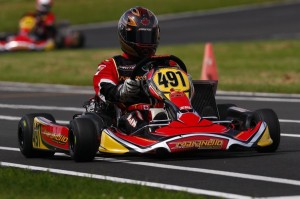 It is a similar situation in DD2, where Ben Cooper (Birel) has won four of five and compiled 1225 points in the process. The KMS North America Team Manager has all but secured his second consecutive DD2 title, and has also already qualified for the Grand Finals through the season opening Florida Winter Tour. The same is true of second-in-points Marco Di Leo (Praga), as the IPK North America Team Manager has 1022 points and previously qualified for Grand Finals through the FWT as well. That brings the battle for a Grand Finals ticket to third, one that has been hotly contested between Maranello North America teammates Brendon Bain and Fred Woodley all season long. While Woodley was second in the season-opening run at Mosport, Bain was second in his latest start at Le Monaco and currently holds the spot by 85 points over his teammate. The finale on Sunday will determine who joins Cooper and Di Leo in DD2 at New Orleans.

Micro-Max driver Matthew Latifi (TonyKart) is the third driver to have gone near perfect, caught out only by sudden rains at race two. Latifi won the season opener at Mosport, swept through Goodwood and charged from ninth to victory in his latest series’ start at Le Monaco. The defending champion has 1175 points and is on the cusp of his second-consecutive class championship with Ferrolati Corse. Once again an additional storyline becomes Grand Finals, and in this case four series’ regulars have already qualified for the NOLA Invitational at Grand Finals with three more spots to be confirmed on Sunday. Thomas Nepveu (Zanardi) qualified by winning the Western Canadian Championship while William Chayer (Birel), Latifi and Xavier Harris (Praga) qualified through the Canadian National Karting Championships. Second-in-points Alexandre Legare (Zanardi) is in a commanding position for the first ECKC berth while with a drop applied, Patrick Woods-Toth (CRG) is 34 ahead of Joshua Cunha (OK1), who is in turn just 2 clear of Birel driver Jeremy Tallon! Prefinal and Final points will therefore prove paramount for the youngest ECKC competitors on Sunday.

The Rotax Mini-Max competitors are also vying for spots in the NOLA Invitational at Grand Finals and once again here series’ regulars have already qualified to compete. Class point leader Antonio Serravalle (TonyKart) notched his spot in winning the Canadian National Karting Championships, and is also a strong bet to notch his second ECKC Championship as he sits with 1175 points through race five. He was joined on the Nationals’ podium by Roman De Angelis (TonyKart) and Samuel Lupien (Birel), the trio earning Grand Finals’ invitations. Thierry Cote (CRG) earned his spot in winning the Western Canadian Championship, leaving three spots available Sunday. Leading the charge for them is JP Hutchinson (TonyKart) who is third in ECKC points and 78 up on Thomas Simard when a drop is applied, the TonyKart driver moving from sixth to fourth in points during that process. Joe Soranno (LH Kart) then owns the third qualifying position, one he can confirm with a solid outing at the JimRussellKartingAcademy. 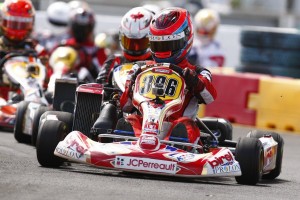 Point leader Olivier Bedard is looking for a return to the Rotax Grand Finals (Photo: eckc.ca)

Rotax Max Junior and Senior then remain, and yet again here there are extraordinary circumstances. Olivier Bedard (Birel) in Rotax Senior and Jeffrey Kingsley (TonyKart) in Rotax Junior are holding firm on the slimmest of championship margins, but in both cases the driver chasing them won the Canadian National Karting Championship and therefore qualified for the Rotax Max Challenge Grand Finals! While the victories don’t ease the pressure on the title hunts, they do ease the pressure on Grand Final bids – yet not by much.

After winning the Le Monaco ECKC start in Senior, Bedard now sits 22 up on new National Champion Zachary Claman DeMelo (Praga) after a drop is applied to the totals. While Bedard will look to manage that edge, he will also be well aware of the 39 point advantage he currently has on Kevin Monteith (Birel). Maxime Couturier (Zanardi) is also within one hundred points of top spot while teammate Steven Szigeti is just outside that. Kingsley is managing the same gap in Rotax Junior, the point leader 22 up on Gianfranco Mazzaferro who was awarded the Canadian National Karting Championship and a trip to Grand Finals in the process. Fellow TonyKart driver Anthony Tolfa is third, and the only other driver within one hundred points of Kingsley both before and after drops are applied to season totals. The final ECKC championship order will be settled in the last race and is incredibly tight in the top ten with Christophe Paquet (CRG), Natael Cantin (Birel), Tyler Ripani (LH Kart) and Alexandre Lacroix (Zanardi) each having put together solid campaigns as well.

In Briggs & Stratton the closest of the classes heading to the finale is Junior and once again here the margin being managed is just 22 points. Braxton Terry (Birel) sits at 825 points through five rounds with a dropped event and is hoping to stay clear of a pair of contenders. New National Champion Tyler McCullough (Praga) is one driver sitting at 803 and the other is Jordan Latimer (K&K). Nicholas Hornbostel (OK1) is also within one hundred points of top spot heading to the final round. In Senior, Jon Treadwell (K&K) has been managing the lead since Mosport and his 818 points are 93 clear of both Mathieu Demers (CRG) and teammate Marc Stehle. No other driver is within one hundred points of the lead. Masters point leader Jamie MacArthur has no other driver within one hundred points of his class lead headed to the finale as the Birel driver has won the last two starts and reached 950 points when he drops his worst. Tyson Stevens (WildKart) sits second and Russell Kroon (CRG) third.

This season marks the first time the ECKC finale has followed the Canadian National Championships but it is not the first time the schedule has wrapped at the JimRussellKartingAcademy. The first and second ECKC seasons concluded in Mont-Tremblant as lead-up events to Nationals and this year will make it three of four. With many championships hanging in the balance, it promises to be a dramatic day. For all the latest news and updates, please visit eckc.ca often. For weekend photo galleries and results as they happen, please visit canadiankartingnews.com and follow @CKN_Live on Twitter.