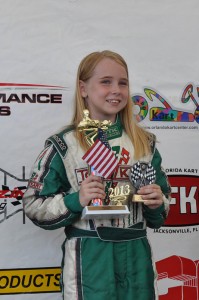 Heading into the 2013 racing season, the young and talented Jordan Heffner would have a jam-packed schedule. Competing in the Florida Winter Tour, North Florida Karting Championship and select events up and down the eastern half of the United States, Jordan and her father Jason would make the Florida Karting Championship Series (FKCS) their main focus. When the six race series had finally come to a close, Heffner would amass three wins, five podium results and never finished outside the top-six en route to being crowned the 2013 FKCS Rotax Micro Max Champion.

Starting the season off at the OrlandoKartCenter in Orlando, Florida, Jordan Heffner would have a consistent weekend and a great start to her quest for the title. Qualifying her Tony Kart in the third position, the young female would remain constant throughout the day finishing third in the prefinal and holding station in the main event to score her first podium of the series in 2013.

Traveling south to round two of the series at the Homestead Karting facility, Heffner would turn up the wick. Scoring the pole position in the morning qualifying session and finishing third in the heat race, Heffner would run into some bad racing luck in the main event. With contact seeing her exit the track surface, the Floridian quickly rejoined the track and fought her way back forward for a sixth place result.

A dominant drive would come from Jordan at the RaceComplex facility in Ft. Myers, Florida where she proved to be the class of the field. Qualifying on the inside of the front row and taking the prefinal win, Heffner went on to score a perfect event as she topped the blocks in the day’s final. Sweeping the entire day of Rotax Micro Max competition, Heffner scored her second pole position and first victory of the 2013 FKCS program.

Race four at Monticello Karting would start just as race three did for the young up-and-coming driver as she managed to claim the pole position. Falling one position in the prefinal to finish second, Heffner would be a victim of an outside starting spot in the main event. Falling back outside the top-five on the start, the female driver would battle her way back up the running order to score a third place podium result.

Heading to her home facility for round five, Heffner would have another perfect weekend. Taking the pole position, prefinal win and main event victory, the Tony Kart driver would score her second perfect event of the series and solidify her control in the series title.

The Florida Karting Championship Series finale would take place this past weekend at the 103rd Street Sports Complex in Jacksonville, Florida. With ultra-high speeds and a technical corner leading onto a 1000-foot front straight, Heffner would once again be a threat. Qualifying on the outside of the front row in the second position, Heffner would hold station for the day, finishing second in the prefinal and second in the main event. With a penalty post race on the winner, Heffner would be awarded the victory, her third of the FKCS season and with that, secured the Rotax Micro Max championship.

“I am really happy for Jordan,” expressed past Florida Winter Tour champion and father Jason Heffner. “She works hard and we travel a lot, racing most weekends. She has really improved thanks to her track time and all the coaching from everyone at Ocala Gran Prix. We are looking forward to the remaining races in 2013 and onwards to 2014.”

Jordan Heffner and the entire Heffner family would like to thank Ocala Gran Prix and all of their employees for a successful 2013 Florida Karting Championship Series. Jordan would also like to thank Jose Castro of CMW Engines for the awesome power all season long, Parazinho Chassis Jig for straightening a few bent chassis throughout the season and HeffnerKartParts.com for supplying all of her Tony Kart and OTK components throughout the season.