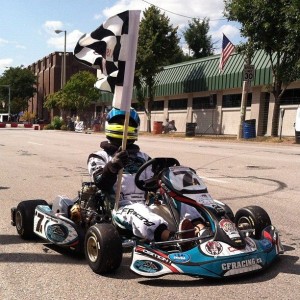 Canada based CF Racing made their annual journey to Rock IslandIllinois for the Rock Island Grand Prix.  After taking their first victory last year with driver Cory Cacciavillani behind the wheel, sights were set on taking home another RIGP win. The determination paid off with a dominant performance on Sunday in TAG Senior where he was able to take the win.

For the 2013 running of the RIGP CF stepped up their game entering a staggering four classes broken down into five main events.

First class on the agenda was the one and only race held on the Saturday, TAG Senior 1.   With the goal of giving back to the community the grid would be set by each entrant’s total pounds of canned food donations.  A donation by CF of 700lbs of canned goods put Cacciavillani in P2 for the start of the race.  Taking the early lead Cacciavillani would spend the majority of the race trying to open up a lead.  Eventually Cacciavillani settled in however the second place runner was in tow.  Cacciavillani would be overtaken with only a few laps remaining and although he tried everything to get back by; he would be left to settle with a second place finish.

First race on the Sunday schedule for the CF Team was Briggs LO206 Medium. Cacciavillani showed speed all weekend which culminated in a P2 starting position out of 30 karts for the main event.  On the opening lap first and Cacciavillani would make it through turn one unchallenged and began breaking away from the field.  Unfortunately it only took three laps before lapped traffic began presenting challenges to the front runners.  Eventually Cacciavillani would pass a lapped kart that would run him wide into the barriers and shuffle him back to the 6th position.  He would battle back to P3 slowly reeling in the leaders however in the end he flat ran out of laps and brought the CF Racing prepared 7A machine home in third.

Next up was the Leopard race where Cacciavillani would start in P2 after battling back and forth during qualifying with the pole sitter.  The CF prepared Leopard was fast and Cacciavillani would push the pole sitter lap after lap in the early stages until they had broken away from the rest of the field.  Unfortunately he would pay the price for laying down those flyers; as he entered turn 5 glued to the first place karts bumper he would hit one of the crosswalks awkwardly causing the kart to push straight into the barriers hard.  In total he took out 14 barriers but was able to walk away unharmed while the kart would be damaged beyond repair.

TAG Senior on Sunday would see Cacciavillani battling a talent heavy field.  After the hard crash in Leopard he would have to put it all behind him and push forward again running at the limits against the barriers.  The race would prove to show the true dominance of the 7A Kosmic powered by a CF Racing Vortex ROK.  Cacciavillani won the drag race to the first corner and never looked back pushing lap after lap and taking a dominating victory by a margin of nearly 10 seconds. This earned him his second career Rock Island Grand Prix victory and put him in the books as a multiple time winner.

The last class of the day would be Briggs LO206 Heavy.  Foregoing qualifying would put Cacciavillani at the back of the 18 kart field.   After taking the victory in TAG Senior in the prior race he went right back to work.  Cacciavillani managed to work his way to the 7th position by lap one and within the following two laps moved into P4 where he would work with the 5th place kart to attempt to hunt down 3rd.  Eventually the white flag would fly and Cacciavillani would end the weekend with another podium finishing in 5th.

“After the win here in 2012 it’s great to follow it up with a win at this year’s event.  It truly is an awesome event and the team and I look forward to coming here year in and year out. You can bet we will be back next year looking to bring home another rock trophy!”  Cory Cacciavillani – Driver CF Racing.

Next up for the CF Racing team is the coveted SKUSA SuperNationals held at the Rio Hotel and Casino in Las Vegas, Nevada.  Driver Cory Cacciavillani is slated to race in both the TAG Senior and Rotax DD2 divisions.