Qualifying heats wrapping up in France 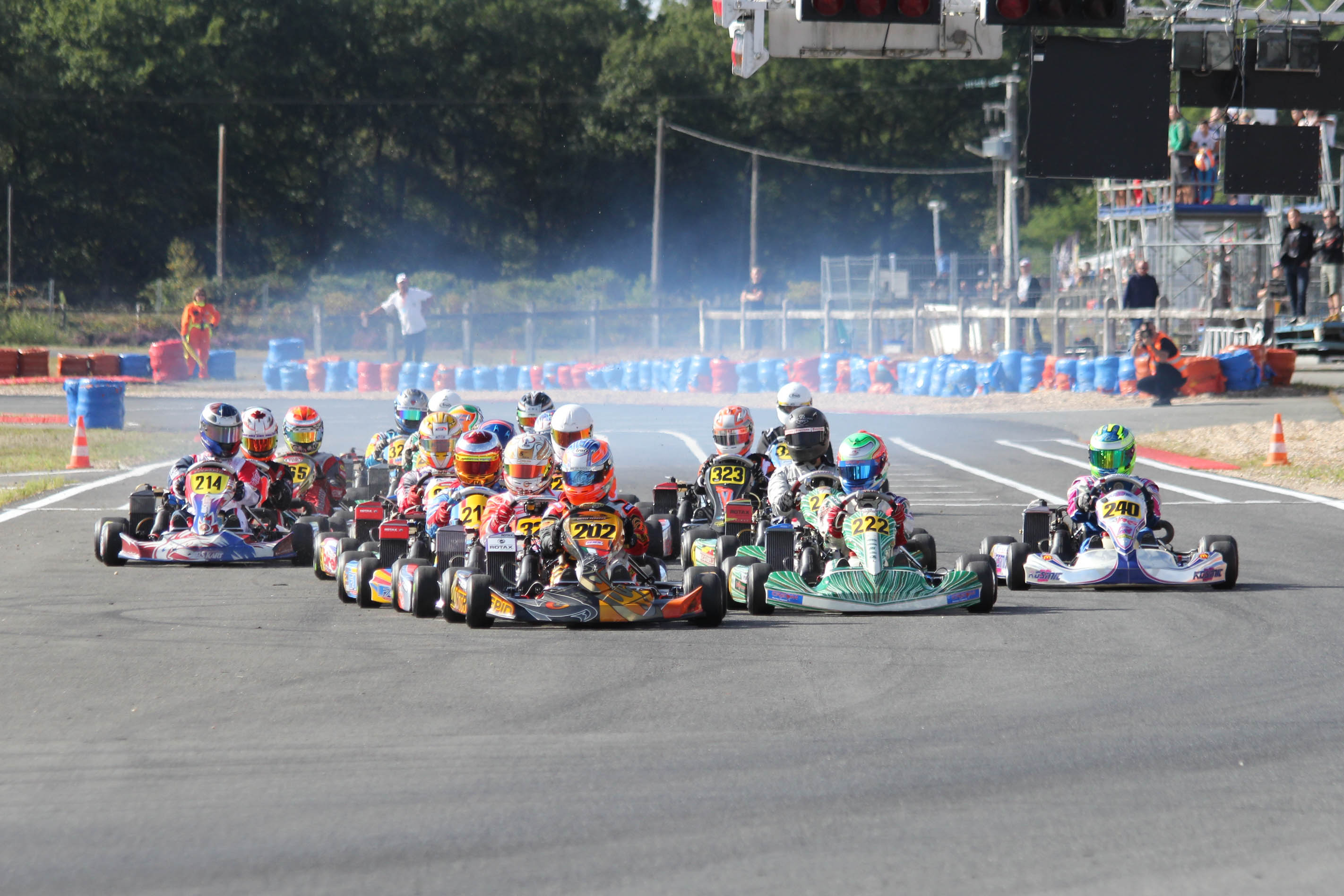 The final round of the ROTAX MAX Euro Challenge today completed the qualifying phase with a total number of 22 heats. After the French weather turned the Friday qualifying into a kind of lottery – especially for the DD2 drivers – conditions were quite more stable on Saturday and made for a mostly dry track. Only the last four heats had to deal with slight rain in the end.

The fight for the championship title in the junior category already began in the heats. The two favorites Connor Hall and Guan Yu Zhou (both Strawberry Racing) both came up with two wins each. Yet Zhou had the advantage on his side. By finishing second in one of his heats, he finally did slightly better than championship leader Hall. As a result Zhou put his Tony Kart on pole position for the prefinal. But Hall could be satisfied as well. He took the second place in the overall ranking, thus starting from first row on Sunday, which is a comfortable position to defend his leading gap of 18 points against his British countryman. Behind the championship aspirants Josh Price (Price Racing) and Jai Niijar (Strawberry Racing) took places three and four in the ranking, while Lando Norris – newly crowned CIK European champion of KFJ – completed the top five positions.

In the senior category the heats proved to be a head-to-head fight between the title rivals Charlie Eastwood and Harry Webb (both Strawberry Racing), as they shared six wins out of ten. Finally the weather decided the duel in favor of Eastwood, since Webb started the last rainy heat on slick tires. Being chanceless on the slippery track, he only finished twelfth, which threw him back on fourth place in the overall ranking. Alongside pole setter Eastwood, Edward Brand (Intrepid Driver Program) established himself in the first row for the prefinal. The vice champion of 2012 took two wins and maintained his chances for a possible triumph on Sunday. That applied to championship leader Philip Morin (Dan Holland Racing). After a sixth position in the qualifying he showed a very consistent performance, which finally put him on third position in the ranking.

The DD2 drivers showed a very close competition. In the end one saw not less than six different winners in the six qualifying heats. Ben Cooper (KMS Europe), Barrie Pullinger (Dan Holland Racing), Lucas Orrock (Team Orrock), Sean Babington (Dan Holland Racing), Kevin Ludi (Spirit Racing) and Ferenc Kancsar (KMS Europe) were the lucky ones sharing the victories. Adding all points, it was Pullinger leading the ranking and taking pole position. Behind him the line up was formed by Orrock, Ludi and Cooper, while Kancsar still managed place seven. Championship leader Xen De Ruwe (FK Racing Team AB Ltd) was quick too, but was not able to turn it into a real good result. More than place nine was not possible for Belgium’s title hope.

As for the DD2 Masters the quickest man in qualifying, Dennis Kroes (Team Kroes), had to leave the way for his opponents. On the top it was Cristiano Morgado (Josh Hart Racing), who conquered the best position after the heats. Behind him his teammate and title favorite Alessandro Manetti (Josh Hart Racing) was second best of the Masters drivers. In doing so the Italian had the edge over Christophe Adams (Sporting Formula K France), who is still leading the championship.

All told the preparation for some thrilling finals are made. The entire race action and the decisive fights for the titles will be broadcasted live by RGMMC TV on Sunday. So stay tuned on the official website www.rotaxmaxeurochallenge.com, where you get all information regarding reports, photos, results and live TV stream.