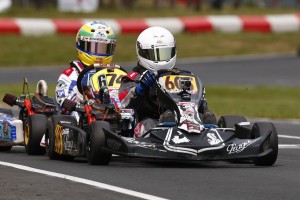 Four-stroke racing in Canada has been experiencing a revival this season and the Canadian National Karting Championships were no exception as nearly sixty Junior and Senior drivers were on hand at Goodwood Kartways to race with Briggs & Stratton. IPK North America’s Tyler McCullough was among them, and after a brilliant week’s work he topped all, claiming the title of 2013 Canadian Junior Champion!

“I’m not really able to put into words the feeling of winning the Nationals,” McCullough said afterwards. “I am just very excited and grateful for having an amazing weekend. We worked very hard for the last few weeks getting ready for Nationals and it all paid off!”

After qualifying third and just over a tenth off pole position, McCullough came through the heats consistently at the front, winning heats one and three to take pole position for a Saturday afternoon Prefinal, a race where he finished second to maintain a front row spot for the National Final.

“I really just tried to stay out of trouble and wait for good opportunities to pass,” McCullough said of his approach through the heats. “Between Paolo, Daniel, Marco and my dad, we tried a few different driving approaches and I felt good with the Praga kart and the set-up we had worked hard for since Wednesday practice. I was very nervous about the start and how I would perform during the Prefinal so the plan was to make it through the first five corners then try to hook up with Roman (DeAngelis), if we could, and break away from the field because he was super-fast all weekend. I would have been happy to go with anyone if the chance came up, but I was glad it was Roman as we both seemed to be on a roll at the right time.”

The pair finished one-two, less than a tenth apart and nearly five seconds clear of third, setting the stage for a fantastic Final. The same situation unfolded in the main event, as the pair once again raced free, this time nearly ten seconds up by the final flag. It was classic four-stroke work by the lead pair, and at the end it was McCullough crossing first.

“I got the start I was looking for in the Final,” McCullough recalled. “With the help of Daniel and Marco I was able to protect my position and make it through the first four corners. Then as we headed up towards corner five I had the inside, held my line, and came out in second, about five kart lengths behind. Then it was a matter of a couple laps to catch back up as my tires started to come in, and when we finally hooked up we started to pull slowly away from the guys chasing us. We kind of played follow-the-leader, with neither of us able to get away from the other.”

The data certainly supports the point as both set their fast laps on ten of twenty-five, a 41.572 for McCullough in the lead and 41.571 for DeAngelis on his bumper! After pushing through laps one to seven, the Praga driver then led eight to fourteen, pushed again from fifteen to nineteen and then took the lead again on twenty. The last few laps were sensational, McCullough being passed, then retaking the lead later in the same lap before racing under the checker! The entire IPK/Goodwood crew was thrilled, and McCullough had a lot of people to find when he finally cleared the scales after his victory lap.

“My mom, and my dad for sure, he gave me an awesome set-up every time,” McCullough said of the people he wished to thank for supporting his effort. “Paolo was excellent in trying to help me stay calm and focused on the race and what I needed to do, and Daniel and Marco for all the time they took to talk to me and the advice they gave to help me and my dad with driving and set-up. My good friend Nick helped keep things fun, and my friends from Sudbury, Braxton and Zack. My grandparents as well, for letting us borrow their trailer so we could stay at the track. The Praga kart worked amazing; Briggs for giving us some great motors to race, and the entire Goodwood race track team for an amazing weekend! Thanks again!”