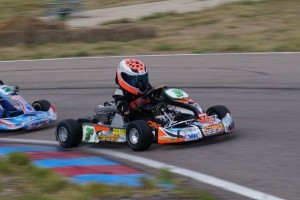 Returning to the seat of a racing machine after a terrifying incident is one of the toughest feats to accomplish in racing. To return and run one of your best races is rare to say the least. At the Superkarts! USA Rocky Mountain ProKart Challenge finale in Denver, Colorado over the August 24-25 weekend, Tristin MacLeod did just that. After a rough wreck at the start of a heat race on Sunday at the SKUSA SummerNationals, the young racer and his dad were unsure of what the rest of their 2013 season would unfold after the accident that destroyed MacLeod’s kart.

“We really weren’t sure what out plans were after Tristin’s accident at the SummerNationals,” Tristin’s dad Jim MacLeod said. “His kart was trashed and all his safety equipment was tore-up to the point of needing to be replaced. We are so grateful to the people at Valhalla Racing for sending Tristin a brand new neck collar after his was ruined protecting him in the crash.” The two were able to scrap together another kart together, and make the drive to The Track at Centennial for the final two rounds of the RMPKC’s 2013 season. Tristin showed everyone that it was going to take a lot more than one bad accident to put a dent in his season.

MacLeod looked stellar in qualifying has he was just over two tenths off the pole position time, putting him third on the starting grid. Using the inside lane starting position coming to the green flag in the first heat race, MacLeod put a great move on the outside pole position driver to secure second position in the first corner. MacLeod would race well, eventually finishing the first heat in third. Heat two saw MacLeod use the same move as before to grab second place early. MacLeod then ran behind the leader, setting up and executing an impressive pass in turn one on the third lap to take the lead for the first time. Tristin would hold the lead for two laps before he was pushed back to second. Later in the race, MacLeod made contact with third place resulting in MacLeod dropping a wheel in the dirt and getting sideways for a split second. Smooth hands and a clear head kept Tristin’s kart from spinning as he quickly regained control only falling to fourth before climbing back and finishing in the third position. The main event saw MacLeod get the jump in to turn one for the third time as he engaged in a race for second. Holding the second spot for the first half of the race, he would fall to third where he finished Saturday’s feature.

Sunday was a quieter day for MacLeod. Qualifying fourth kept Tristin from executing his patented turn one slide job he perfected on Saturday. Rather, Tristin was left to chase down the third place starter in the first heat race. With two laps to go, MacLeod took the position with authority to end the race third. Now back on the inside for the start of heat two, MacLeod slid into second place on the opening lap, only to relinquish the position later in the race to enter the final main event of the season in third place. Tristin ran third for much of the feature race, running competitive and very consistent lap times as he finished the main event in the fourth position. When the dust settled, and the seven race season had officially come to an end, Tristin finished fourth in the championship standings in his first year at the Superkarts! USA regional program.

“I had a great weekend at Centennial and had a lot of fun,” Tristin explained. “I absolutely have to thank Scott Allen and Allen Inspections for his sponsorship this weekend. If it weren’t for Scotty, this weekend wouldn’t have been possible. I also really want to thank Valhalla for sending me a new neck collar. Also I want to thank Sabre Cook and Jet Davis for all their help this season, as well as Stacey Cook and CRG-USA.”

Tristin would also like to thank Micro Max racer Filip Niemkiewicz and his family for their support at the final two rounds, as well as Craig Mansfield who opened his home to Tristin the week of the race. MacLeod will finish out the 2013 season at clubs races, with three remaining on the schedule – September 15, October 20 and November 3 before turning his attention to the 2014 campaign. For more on Tristin’s racing, visit This End Up Racing on Facebook.

About Tristin MacLeod:
Tristin is an energetic and excited young kart racer.  Now in his fourth year of racing karts, the 10-year-old has relocated to Grand Junction, Colorado to be closer to CRG-USA headquarters and their home track, Grand Junction Motor Speedway. In 2012, Tristin competed in the SKUSA Rocky Mountain ProKart Challenge series and finished third in the TaG Cadet point standings in his first season of regional competition. For 2013, he plans to campaign both the SKUSA Pro Tour and run in his sophomore season of the Rocky Mountain ProKart Challenge.  In his off time, Tristin enjoys the outdoor life, camping, and fishing and is also an avid archer.