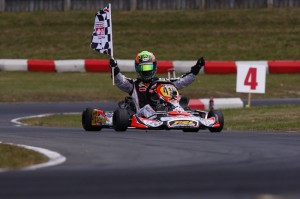 Pier-Luc Ouellette earned the Rotax DD2 title and will be back with Team Canada to vie for his third World Championship (Photo: PSL Karting)

“First of all, the DiLeo family did a fantastic job on the facility and the management of the circuit during the entire event,” noted PSL Karting’s President, Dominic Labrecque. “The track looked amazing!”

Leading the charge for Team PSL Karting was two-time Rotax Max Challenge Grand Finals (RMCGF) World Champion Pier-Luc Ouellette. Displaying a dominant performance in the Rotax DD2 category, Ouellette managed to sweep the event, claiming pole position, all three heat wins and the prefinal victory. Coming into the Championship final, Ouellette proved his prowess in the two-speed class, as he drove off to an impressive 8.4 second victory to claim his third Canadian National title and earn his ticket to the 2013 RMCGF in New Orleans this November.

Also contesting the DD2 class, Alessandro Bizzotto was poised for the final podium position in the main event. Starting his efforts with third in qualifying, and posting third, fourth and fourth in the heats, the rising talent would add another fourth in the prefinal to line up outside row two for the weekend’s final. Battling for position, a late charge by a fellow competitor put him back to fourth at the line, still an impressive feat for the Quebec resident. Samuel Drouin would complete the Team PSL Karting DD2 roster and finish just outside the top-ten in 12th.

Pulling double-duty on the weekend, Ouellette would be back in action in the competitive Rotax Senior division. One of only a handful of drivers competing in two classes in Goodwood, Ouellette pulled off an impressive feat in claiming the Vice-Championship title. Clocking second in qualifying, and earning two seconds and a fourth in the heats, Ouellette didn’t have enough to claim a second championship on the weekend, but drove to finish second in both the prefinal and final and was later honoured on the podium as the 2013 Rotax Senior Vice-Champion. 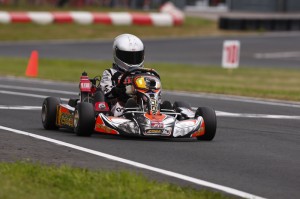 Two additional Team PSL Karting drivers would tackle the demands of Senior competition. Marc-Andre Levesque ran at the pointy end of the field the entire event, and left with a notable top-ten result after placing seventh in the final. Nathan Kelly also ran consistently in the top-ten through qualifying, heat racing and the prefinal, until a disappointing DNF in the final dashed his hopes of ending strong at Goodwood.

“Obviously, this race was very important to us, especially in the current market situation,” added Andrew Campbell, PSL Karting’s Team Manager. “We worked, in only the few weeks before, to prepare the new CRG senior chassis and ensure we had tested the best possible solution to guarantee all our drivers were in the top-ten.”

More top-ten results would come via the two PSL/CRG DD2 Masters entries. Looking strong from the start, Dany St-Hilaire posted the second quickest lap in qualifying to set himself up for three solid heat results to follow. Falling back to seventh in the prefinal, St-Hilaire moved forward to finish fifth overall. 2006 Rotax Masters World Champion Luc Sauriol was able to better his teammate by one position, just missing a repeat of his third place podium result from the 2012 Nationals.

The remaining Rotax classes would see Team PSL Karting drivers add more top-ten results, as Patrick Woods claimed fifth in the Micro Max division with rising star Thierry Cote working towards his eighth place finish in the Mini Max final. Rotax Junior team drivers Charles Regimbal and Alex Murphy had a tough go against the field of 27, however, Christophe Paquet of ACM, a dealer of CRG through PSL Karting, earned Vice-Championship status after an exciting final race in the junior division.

Yet another Vice-Championship title would be earned on the weekend, as PSL Moncton’s Gerald Caseley battled a huge field of Briggs Senior drivers. Entering as the reigning Canadian National Champion in the category, Caseley fought hard to retain his title. Waged in a fierce battle in the highly competitive class, Caseley moved to the point with three laps to go in the final in his bid for the win. After being passed back on the same lap, the driver from the Maritimes was unable to get around the leader who was driving a defensive line. Coming to the stripe in second, just 0.102 seconds shy of the win, Caseley crossed in second and earned Vice-Championship status. Jarrett Leach finished a commendable 28th out of 38 drivers in only his second year of karting, while Briggs Junior pilots Graci Young and Stephen Oliver gained tremendous experience at this year’s Canadian Nationals.

“Another, extremely important class to karting in Canada is the Briggs and Stratton program,” continued Labrecque. “30% of our drivers were running in this ultra-competitive category. You could see the entire paddock watched each of these heats, as the racing it provided was incredibly close.” 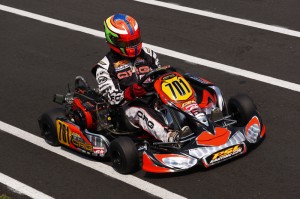 All in all, Team PSL Karting would leave the 2013 Canadian Nationals with one championship title, two vice-championships, another four top-five results as well as two additional top-tens. With their continued focus, it remains evident the PSL/CRG package is at the forefront of karting in Canada.

“The addition of JVD to PSL, has been nothing short of impressive,” Campbell stated.

“We would like to thank our loyal and dedicated drivers and customers for their continued support to CRG and PSL,” concluded Labrecque. “The entire team is working their hardest to have the best package on the grid. We now look forward to finishing the ECKC Championship, Pan-Am and Vegas!”