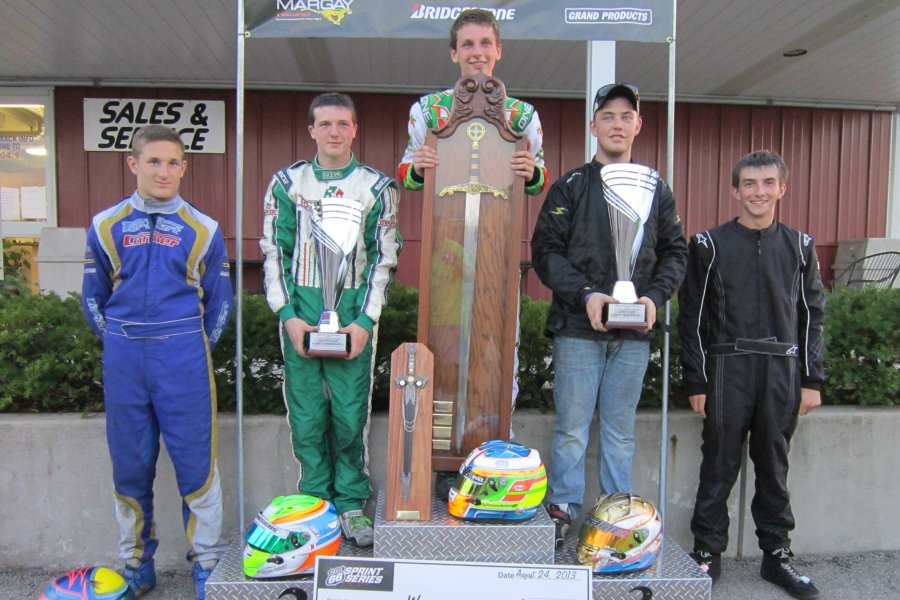 The Russell Karting Specialties/L & T Manufacturing Route 66 Sprint Series presented by Bridgestone/Margay and Grand Products held round four on August 24-25 at Concept Haulers Motor Speedway (CHMS) in Norway, IL.  The event was sponsored by EMJ Metals.  234 entries competed on this hot summer weekend with temperatures reaching into the 90s on Sunday.  For the first time this season there was no rainfall over the three-day weekend.  The fifth annual Komet Throwdown was the featured event on Saturday where a huge traveling sword trophy and $500 cash were awarded to the victor.

The first final racing on Saturday was the Hollywood Crane Service Kid Kart I Championship class.  Fast qualifier and pre-final winner Kasey Gish was not able to hold off Camrin Cass who took the win by just .33 seconds over Gish.  Pierce Sonderup, Maximmilian Opalski and Nicolas Martens rounded out the top five to claim their trophies.

Next up was the Schwanbeck Family Racing Komet Sportsman I class where fast qualifier and pre-final winner Sam Mayer pulled out to the early lead.  Giovanni Bromante was able to catch Mayer near the end of the race, however Mayer (Merlin) held him of for the win by .156 seconds.  Brandon Lemke, Steven Dial and Austin Schaff rounded out the top five. 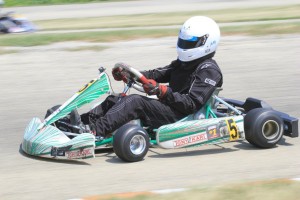 The next final racing on Saturday was the RLV Yamaha Senior Lite class with large field of 20 entries.  Pre-final winner and fast qualifier Mike Prokup paced the start alongside of Collin Griffin.  Prokup pulled away from the next pack of Darin Marcus, Adam Crepin and Justin Vancil.  Collin Grffin worked his way back toward the front however Prokup (Tony kart) had pulled out to a three second win by the finish with Griffin, Nick Stagl, Crepn and Vancil rounding out the top five.

The Yamaha Junior Heavy class sponsored by Woltjer Racing Engines was up next with 18 entries.  Pre-final winner and fast qualifier David Malukas, who just moved up from the Sportsman ranks, took the early lead followed closely by Becker Reardon, Killian Keaveny and Kenlan Morse.  After a few laps, Reardon moved to the point and Morse worked her way into third place.  Morse progressed up to second place, however Reardon (Birel) took the win by just .086 seconds with Morse, Malukas, Keaveny and Brandon Collins rounding out the top five at the finish.

The next class racing was the Jet Karting Yamaha Rookie I class with 16 entries. Pre-final winner and fast qualifier Maks Kowalski paced the start alongside of Mark Fineis.  Kowalski and Fineis put a big gap on the field as they battled for the lead.  Fineis (Birel) moved to the point about mid-race and held off Kowalski for the win by .177 seconds.  Aidan Harrington, Talan Drake and Joshua Hansen rounded out the top five in the 14 lap final. 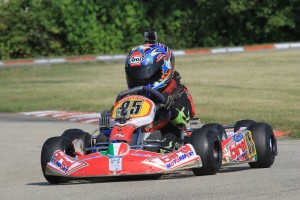 Mark Fineis won the Yamaha Rookie I and II finals

The Franklin Motorsports Leopard 125 I class staged next with pre-final winner Kyle Kalish pacing the start alongside of fast qualifier Michael Geringer.  Geringer took the lead coming out of turn two and he and Kalish would battle for the lead until Adam Crepin worked his way past Kalish about mid-race.  Crepin and Kalish swapped positions several times allowing Geringer (Tony Kart) to pull out to a .756 second win.  Crepin, Kalish, Troy Hottman and Kindra Hurlbert rounded out the top five.  Adam Crepin set fast time in the race at 46.34 seconds.

The Triple E Sales Yamaha Sportsman I class gridded next with a big field of 18 entries.  Fast qualifier and pre-final winner Matthew Northrop paced the start with Austin Schaff taking the early lead brining Luke Fineis with him.  The next pack of Giovanni Bromante, Dillon Schwanbeck, Michael Paterno, Stephen Dial and Sam Mayer followed closely.  The lead pack grew to eight karts and the battle got rough near the end of the race with Schaff getting spun out on the final lap.  Stephan Dial (Merlin) avoided the spin and pulled out to a .547 second win over Sam Mayer.  Bromante and Northrop were accessed time penalties for rough driving.  Schwanbeck, Fineis and the relief drive for Brandon Lemke rounded out the top five positions.

The Ballistic Designs Yamaha Masters class gridded next for their final with pre-final winner and fast qualifier Chad Kruger pacing the start alongside of Matthew Roberts. Kruger led the first few laps until Roberts moved to the lead. Roberts (Margay) held on for the win over Kruger by .165 seconds with Eric Bartsch, Dave Timmerman and Brian Zirves rounding out the top five. 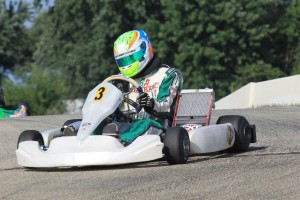 The final event of the day was the fifth annual Komet Throwdown.  After a 10 minute open qualifying session, the 14-kart field was set with Kyle Kalish taking the pole position and winning a set of Bridgestone tires.  Kalsih and Cal Stewart paced the start of the 20 lap event.  In the early going it was Kalish, Stewart, Michael Geringer, Killian Keaveny and Collin Griffin running up front.  Christian Besasie was laying down the fastest laps of the race and moving up through the field.  Brad Brittin, Nick Stagl and Josh Hotz were all battling to get into the top-five money payout positions.  Kalish began to pull away front the front pack with Geringer moving to second by mid-race.  Besasie kept marching toward the front until a spin near the end of the event dropped him back in the field.  Kalish (Merlin) held on for the win by 1.638 seconds over Geringer to claim the $500 first place payout and the large traveling sword trophy.  Cal Stewart, Killian Keaveny and Collin Griffin finished in the top-five cash paying positions.  Second and third place also received large silver cup trophies and Komet gift certificates.

At the Saturday morning driver’s meeting, a set of Bridgestone YLC tires was won by Nick Stagl in a drawing sponsored by Margay/Bridgestone.  CHMS staff provided a bar-b-q cookout on Saturday evening during the Komet Throwdown event.

The first final racing on Sunday was the Haddock Limited Komet class. The start was paced by fast qualifier and pre-final winner Darin Marcus along with Christian Besasie.  Besasie grabbed the lead on lap one followed by Marcus, Killian Keaveny and Brad Brittin.  Collin Griffin started near the back of the field and was setting the fastest race laps as he worked through the field.  Marcus (Merlin) moved past Besasie about mid-race and was challenged for the lead by Keaveny, but held on for the win by .17 seconds.  Kevaeny, Besasie, Griffin and Brittin rounded out the top five.

The Hollywood Crane Service Kid Kart II Championship class was racing next paced by pre-final winner Kasey Gish.  Maximilian Opalski took the early lead followed by Camrin Cass and Gish.  Gish worked his way to the lead but was penalized back to third position handing the win to Camrin Cass with Opalski in second.  Sinead Lynch and Conner Churchill rounded out the top five. 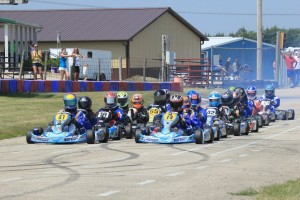 Next up was the Express Karts & Parts Komet Sportsman II class paced by pre-final winner Austin Schaff and fast qualifier Sam Mayer.  Matthew Northrop took the early lead and then Schaff moved to the point.  Giovanni Bromante moved to the lead next until Northrop (Birel) took the lead on the final lap and held off Bromante by .672seconds for the win.  Sam Mayer, Steven Dial and Austin Schaff finished in the top five.

Next up was the Laukaitis Racing Yamaha Senior Heavy class with 19 entries.  Pre-final winner Mike Prokup and Justin Vancil paced the start.  Prokup grabbed the lead into turn one followed by Cal Stewart with Vancil, Adam Crepin and Robby McQuinn close behind.  Collin Griffin and Nick Stagl worked their way into the top five next as Vancil dropped out with a chain problem about mid-race. Crepin moved past Stewart into second place but Prokup (Tony Kart) pulled out to a 1.629 second win over Crepin, Stewart, Stagl and Griffin at the finish.

The Yamaha Junior Lite class sponsored by Comet Kart Sales was up next. Pre-final winner Kenlen Morse paced the start alongside of Killian Keaveny. Keaveny grabbed the lead into turn one followed by Morse and David Malukas. The front trio of Top Karts would gradually pull out to an eight second lead at the finish as Malukas (Top Kart) worked his way to the front to claim the win by 1.68 seconds over Keaveny and Morse.  Dillon Morley and Brant carter rounded out the top five.

The next class racing on Sunday was the Yamaha Rookie II class sponsored by CKT Racing Engines with 14 entries.  Pre-final winner Talan Drake and fast qualifier Mark Fineis paced the start.  Drake led the first two laps until Fineis moved to the point.  Fineis (Birel) pulled away to a 1.096 second win over Drake followed by Aidan Harrington, Carter Cass and Maks Kowalski at the finish.

Next up was the Leopard 125 II class sponsored by Kart Lift paced by fast qualifier and pre-final winner Michael Geringer alongside of Elliot Finlayson. Geringer would lead most of the race, only being passed by Finlayson briefly, until his engine seized.  Geringer (Tony Kart) held off a late charge by Adam Crepin to take the win by .346 seconds over Crepin, Kindra Hurlbert, Mick Gabriel and Anthony Granata in the top five.  Adam Crepin again set fast time in the race at 46.34 seconds.

The final class racing was the Switch Racing Engines Yamaha Sportsman II class with 16 entries.  Pre-final winner and fast qualifier Sam Mayer paced the field at the start.  Mayer took the lead into turn one and led the first few laps until Austin Schaff moved to the front.  Mayer would retake the lead and Dillon Schwanbeck moved into third followed by Luke Fineis and Justin Hutmacher. Schwanbeck (Tony Kart) moved into second and passed Mayer on the final lap to take the win by .287 seconds.  Fineis, Hutmacher and Stephen Dial rounded out the top five.

Tony Kart chassis captured the most wins over the weekend with five followed by Birel (4) and Merlin (4), and Margay and Top Kart with one win each.

The next round of the Route 66 Series will be held at Mid-State Raceway in Springfield, Illinois on September 21-22.  A special money race, the Ribtect Yamaha Senior Shootout will be held Saturday evening.  Pre-entries must be post marked by September 2 to receive the pre-entry discount.  Friday practice will be available at this event.  All entrants will have a chance to win a set of Bridgestone YLC tires in a drawing held at the Sunday morning driver’s meeting.  For more information about Mid-State Raceway visit www.midstatekartclub.com. For more information about the Route 66 Sprint Series, visit www.Route66KartRacing.com.