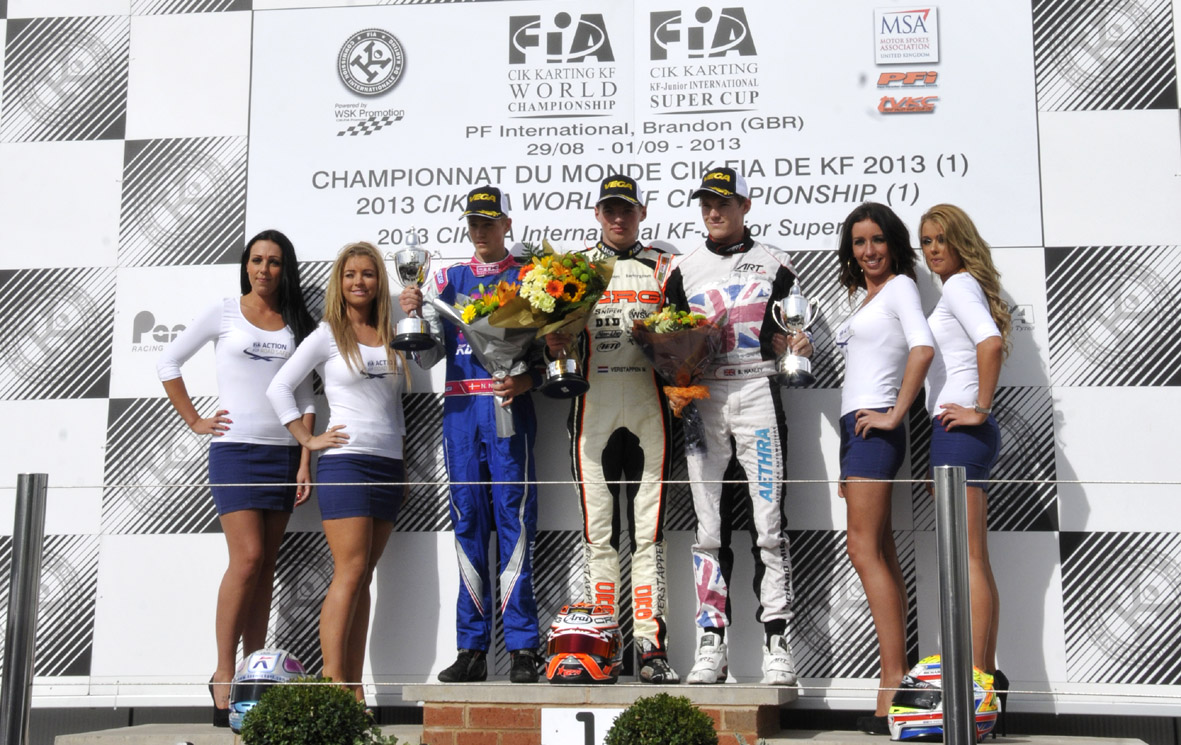 Max Verstappen atop the KF podium in Brandon

The first round of the CIK-FIA KF World Championship has had a very good start on the circuit of Brandon (UK), a facility created by Mr. Paul Fletcher right in the heart of Lincolnshire. All the races ended in an unpredictable way, despite Max Verstappen’s (CRGTM-Vega) superiority. The Dutch driver dominated throughout the whole weekend, even though his performance showed how difficult it is to battle against a pack of opponents as strong as the ones in Brandon. Also the single round of the CIK-FIA KF Junior International Super Cup kept the numerous attendance on the stands around the Brirtish circuit on the edge of their seats. Eventually, the race was won by the English Lando Norris (FA Kart-Vortex-Le Cont), winner at the end of a harsh battle. After this first event, the World KF Championship will race its second and decisive round in Bahrain. There, the 2013 CIK-FIA KF World title will be awarded on the Viva Karting Track of Sakhir, from 19th to 23rd November.

Talking about Verstappen’s supremacy would mean underestimating his efforts to win the race. In the first phase of the Final, the Dutch driver had to keep a terrific pace to fend off his strongest opponents’ attacks: the Danish Nicklas Nielsen (Kosmic-Vortex-Vega) and the English Ben Hanley (Art GP-TM-Vega). Nielsen was the winner of prefinal 2, after Verstappen’s victory in prefinal 1. Hanley, after a great recovery in prefinal 1, immediately entered the battle for the victory of the Final. Verstappen had to keep the two opponents at bay before gaining some lead. Then, Nielsen and Hanley started to battle against each other and lost ground. It was then that the leader of the race gained a lead that he managed to keep until the end, while Nielsen was the runner-up. In the meantime, also the British Tom Joyner (Zanardi-TM-Vega) had entered the tussle for the second place, and Hanley had lost several positions. The latter had to pass the Russian Egor Stupenkov (Energy-TM-Vega) to reach the podium and finish his race behind Verstappen and Nielsen. 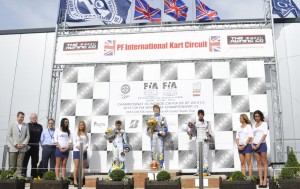 Lando Norris standing on top of the KFJ podium in Brandon

Lando Norris (FA Kart-Vortex-Le Cont) wins the CIKFIA International Supercup KFJ. His victory was the icing on the cake of a weekend which hadn’t started well for the Londoner. The first driver to cross the finishing line of the Final was his teammate Daniel Ticktum, who was then hit by 10-second penalty for a contact with Norris himself during the last laps. Race stewards judged Ticktum responsible and he dropped back to a final 11th place: it was a real shame for Ticktum, the protagonist of an excellent weekend. Other protagonists of the weekend were the Indian with British license Jehan Daruvala (FA Kart-Vortex-Le Cont) and the German Mick Betsch (Tony Kart-Vortex-Le Cont), second and third after battling for the leadership throughout the race.

THE APPOINTMENTS ON TV WITH ALL THE IMAGES FROM BRANDON

It will be possible to relive all the battles on the PFI Circuit thanks to the delayed broadcast on Rai Sport 2, on schedule for next 3rd September at 10:30pm. It will be possible to see the whole final phase of the World KF Championship: from the two prefinals until the Final, together with the KF Junior Final. Always on Rai Sport 2, on Friday 6th at 11:55pm, the special report with the recap of the whole weekend in England.