19th annual event set for the streets of Quad Cities

Labor Day weekend brings its traditions for everyone. For karters, it brings the annual pilgrimage to the Quad Cities area as they venture for a piece of the Rock Island Grand Prix experience. The two-day street race in Rock Island Grand Prix is unlike any other event, offering up the opportunity to race down the city streets of the Illinois city alongside the Mississippi River, and enjoying some crazy night life, all in front of a loyal and dedicated fan group. 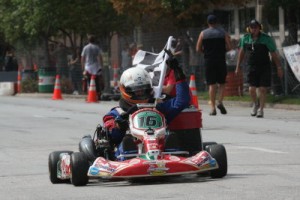 Jordon Musser will be looking for his third King of the Streets crown (Photo: Joe Brittin)

The numerous volunteers that help build the track Friday evening, spend countless hours working over the two days to put on the event, and tearing down the track in time for Monday morning traffic is astonishing. There is no group anywhere else in the country, or the world. Jumer’s Casino & Hotel is sponsor of the $25,000 purse that will be handed out, in addition to the Rock trophies for each class winner. Two lucky racers have the opportunity to win a four-day Grand Prix Road Racing class at the Bob Bondurant School of High Performance Driving, valued at $5,000 each, with a total of $17,000 in prize packages offered this year by the Phoenix, Arizona operation.

eKartingNews.com will be providing its industry leading ‘Trackside Live’ coverage throughout the weekend. In addition to daily reports, paddock insider notes, and forum updates on the Official Discussion Thread, interested fans can listen to the live action at home or on the move. Qualifying action Saturday and the main events on Sunday will be broadcasted at www.ekartingnews.com/live – led by EKN’s own Rob Howden on the mic. Live play-by-play, in addition to live timing courtesy of Race-Monitor.com is available. For those on the move, you can listen directly from your phone with the EKN Mobile LINK. Watch for updates to be published the Facebook and Twitter accounts, in addition to some paddock shots on Instagram.

With over 200 entries registered in the 15 classes, big names highlight many of the categories. The largest class of the weekend is first on the docket – the LO 206 Medium category. The class made its debut last year, with nearly 30 drivers and has surpassed that mark this time around. Many of the top finishers are returning, including those on the podium. Connor Lund was the inaugural winner with Cale Downs second and Scott Barnes from Bermuda winning the fight for third. The most notable entry in the category this year is the return of the RIGP emperor Gary Lawson. The all-time leader in wins at the event – 22 in total – is making a return to the Rock to compete in the new category. New for this year is the LO 206 Heavy class, giving racers a second opportunity at a Rock trophy. 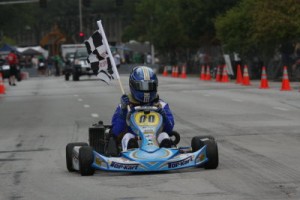 Mason Chelootz is among the many returning winners looking for another Rock trophy (Photo: Joe Brittin)

With the class will be a battle of its own, as EKN’s own Rob Howden and David Cole will be competing in the EKN Challenge, as part of the website’s OnTrack program. Howden makes a return behind the wheel at the Rock for the first time since 2005, while Cole returns after competing in last year’s 206 division, finishing an impressive ninth in his only race in 2012.

The fan favorite has always been, and probably always will be the King of the Streets division. The top shifterkart drivers from across the country all want a piece of the Rock, and only a few have been able to do so. Texan Jordon Musser has claimed victory twice, including last year’s victory and returns to defend his crown. Joining him, and making his first RIGP start is Californian Fritz Leesmann. The two-time SKUSA Pro Tour champ and current #1 in the EKN Stock Moto Driver Rankings is making the long haul to experience RIGP, and possible add another major accomplishment to his CV. In the mix are a number of returning drivers, all looking for their first King of the Streets crown.

The third headline category of the event is the TaG Senior division. Defending champ Mason Chelootz is back for more, looking to add to his RIGP win total. A number of returning drivers are back to fight for their first Rock trophy, including newcomers Dustin Stross from Florida and Indy’s Davey Hamilton Jr. Many of the same drivers will be competing in the Leopard category as well, and could just see another double win for someone in TaG. 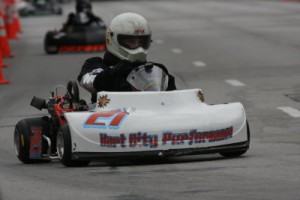 The LO 206 class made its debut at RIGP last year, with Connor Lund the victor (Photo: Joe Brittin)

The 4-cycle categories this year make up a large majority, thanks to 206 and the Clone divisions. Defending winners Jesse Clossey and Connor Lund are back, and so too are the 2011 winners Travis DeVriendt and Leo Carr. All will have to do battle the all-time race winner Gary Lawson, making his first Clone starts at the Rock. The Yamaha SuperCan races always provide drama, and 2012 was no exception. Tony Jump and Bill McLaughlin Jr. each earned their first Rock trophy. Jump will be absent this year, with McLaughlin back to defend his Medium victory. Former winners Michael Dittmer and Tim Goettsch will be in the field, as is Todd Bolton. The Illinois driver competed in the first 16 events, and is back for his 17th time at the Rock Island Grand Prix after sitting out the last two years.

Masters category always provides great racing, as each and every driver are committed to taking the RIGP checkered flag. Lance Lane finally took home his first Rock trophy in 125 Masters Shifter, and is back for more. A number of drivers are returning as well, including last year runner-up Eric Chappell. In TaG Masters, the last two winners will be back to battle once again. Brian McHattie and John Dixon will fight it out for a third win if either are able to outlast the field and the Rock. Rounding out the classes are Pro Open, TaG Junior and Open Shifter.

Two races will also be conducted on Saturday, including Vintage Karts as well as Casey’s Race Against Hunger for TaG Senior racers to benefit River Bend Foodbank. In addition to the prestigious Rock trophy, a number of prizes and awards will be handed out on the weekend. Saturday will host two rounds of practice and qualifying, set to begin after 1pm CDT, with the main events on Sunday set for 11:30am CDT.