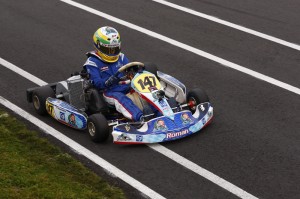 With the ASN Canada FIA Canadian Karting Championships marking the mid-season point for Canadian karting, Team Koene USA pilot Roman Deangelis has begun to come into his own after joining the squad in late May. Competing south of the border at the World Karting Association Manufacturers Cup, Deangelis would set his sights on Goodwood Kartways for the annual event. Competing in both Rotax Mini Max and Briggs Junior, Deangelis would claim the Vice-Championship in both classes and will now join Michael and Nicholas d’Orlando at the Rotax Max Challenge Grand Finals later this season.

Honing his skills in the lower horsepower Cadet and Yamaha Sportsman classes in the United States, Deangelis would turn up the wick in Canada under the watchful eye of Team Koene USA’s Martijn Koene. While a win would be nice, a podium result and accompanying Rotax Grand Finals Micro & Mini Invitation ticket was the goal.

“Roman drove a very smart event,” explained Team Koene USA’s Mike Maurini. “Switching back and forth from the Briggs to the Rotax kart is tough, but he handled it without any issues. Running consistently in the top-five throughout the five day event, Roman turned some heads and was one to watch come Championship Sunday.”

After turning the third quickest time in Friday morning’s Rotax Mini Max qualifying session, Deangelis progressed nicely through the three heat races taking home fifth, fourth and third place results that would classify him fourth for the start of the prefinal. Working hard to move up a few positions in the short prefinal, Deangelis quickly slotted himself into the second position where he would run the majority of the race.

Executing a perfect start in the main event, Deangelis quickly jumped to the point and led the opening few circuits. Running consistent race laps, the Ontario resident would eventually be passed at the halfway point as a light drizzle subsided. Still on slick tires, Roman drove a conservative second half of the race to cross the line in the second position and celebrated on the podium later that afternoon.

In the Briggs Junior class, Deangelis would be the man on the point after Friday’s qualifying effort as scored the pole position ahead of a field of talented drivers. Finishing third and second in the first two heats, Deangelis would cross the line with the win in the final heat but would be demoted to fourth after a controversial on track penalty.

Starting the prefinal from outside the front row, Deangelis drove a flawless race to take the win and pole position for the main event. Looking to earn the Canadian Championship in the final, Deangelis and a fellow competitor would make it a two-kart race for the win. Making multiple passes and defensive moves on the final two circuits, Deangelis would be involved in minor final corner contact and cross the stripe in second.

Team Koene USA would like to congratulate Roman Deangelis, who will now join Michael d’Orlando and Nicholas d’Orlando at the Rotax Micro & Mini Invitational during the Rotax Max Challenge Grand Finals in New Orleans later this year.

Team Koene USA would like to thank Martijn Koene, Mike Maurini, Adam Johnson as well as Brian and Pam Heron for all of the help and continued support throughout the 2013 racing season.

Team Koene USA will have a jam-packed schedule for the remainder of the 2013 season including trips to New Orleans for the Rotax Pan American Championships, Las Vegas for the annual SuperKarts! USA SuperNationals as well as the remaining World Karting Association Manufacturers Cup events. Along with these event weekends, Team Koene USA will complete numerous test days and regional events in the coming months. Drivers looking to compete with the elite karting team are asked to contact Mike Maurini to discuss potential opportunities.

For more information on Koene USA and their online store, please visit www.KoeneUSA.com or contact company representatives at 317.270.8723 or via e-mail to Info@KoeneUSA.com.