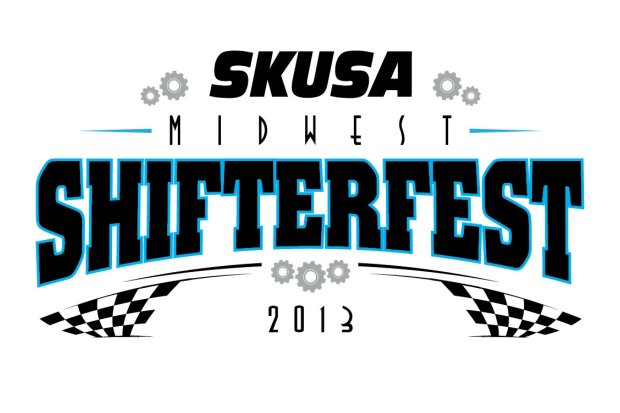 Over the past three years, Superkarts! USA has been working diligently to develop new regional programs through the Western half of the United States.  Regional series and club support ventures have been launched in Texas, Colorado and the Pacific Northwest with much success and the organization’s growing Pro Tour has been on a steady upward climb of support since its launch in 2010. While the organization’s annual SuperNationals has routinely draw from all over the U.S., laying roots east of the Mississippi has not been as fruitful despite the fact that SKUSA’s real history begins in the Great Lakes region of the country.  A new direction has been implemented and it will come in the form of a single one-off national event to reset the brand in the region.  On September 13-15, Superkarts! USA will button up the current Midwest ProKart Challenge series at the inaugural ‘Midwest Shifterfest’, which will be the debut of a new event that will offer up loads of track time as a SuperNationals tune-up, and prize money for Open Shifter and S2.  In addition, SKUSA is supporting this weekend’s Rock Island Grand Prix, offering free Shifterfest entries for the winner of any of the three gearbox classes (King of the Streets, 125cc Open Shifter and 125cc Masters Shifter).

SKUSA has run a Midwest ProKart Challenge for the last six years, initially dubbed the Central States Challenge, always counting on the support and participation of a loyal following.  To cap off the 2013 season, and in preparation for 2014, SKUSA will focus on a single event that will ideally provide a new foundation for future development.   The SKUSA Midwest Shifterfest will take place on September 13-15 at New Castle Motorsports Park, rolling out the red carpet for all shifterkart enthusiasts to come and play.  In addition to the standard Midwest PKC classes which, include a well-supported S2 Semi-Pro Stock Moto class, an Open Shifter class will be offered with a prize money package, all aimed at re-activating the KZ and Mod Moto drivers in the area.  A strong field of TaG Cadet drivers is also expected.  SKUSA will be closely watching the support and interest from the KZ contingent to determine the potential for future inclusion of the category in other events.

“We receive a lot of inquiries from drivers in the East asking when SKUSA will be coming to their side of the country with a big event or a Pro Tour race,” confirmed Tom Kutscher, Superkarts! USA president.  “My reply is always the same, and it’s that we are growing our program slowly and steadily, and that laying down roots East of the Mississippi is very important to us. That said, when looking at the Great Lakes Region in particular, there is just so much racing going in there, we need a fresh, new approach.  We’ll use this final Midwest ProKart Challenge event of 2013 to launch a new annual race that we hope will be the cornerstone of future growth in the region.  I think that our Midwest Shifterfest is going to be a big part of our national program.  And I’m really hoping to see some support from KZ enthusiasts.”

The event at New Castle will be a double-race weekend with practice, qualifying, two rounds of heats and a main each day. Friday practice will be available and will be run by the track.

The Open Shifter class will provide a category for racers using KZ, ICC and built moto powerplants, and is an open tire format.  SKUSA will make things attractive by offering up $1000-to-win, should the field bring in a minimum of 10 drivers.  “Bring what you’ve got and come out to play,” adds Kutscher. “This is about celebrating shifterkart racing.”  The combined points of the two days of competition will be used to determine the overall winner.  SKUSA is also putting up $500-to-win in the S2 class with a minimum of 10 entries.  If the class tops 20 drivers, the first place check will be pushed to $1000!  In addition to the purse for Open Shifter and S2, SKUSA will once again dole out the prizes following the podium presentations on Sunday afternoon for those coming to celebrate with the winners.

Registration for the race is now open at the online store for the Midwest ProKart Challenge. The pre-entry deadline for the race is September 9 at midnight CST.  For more information on anything related to Superkarts! USA, please visit their website – www.superkartsusa.com – or call the SKUSA head office at 951-491-0808.