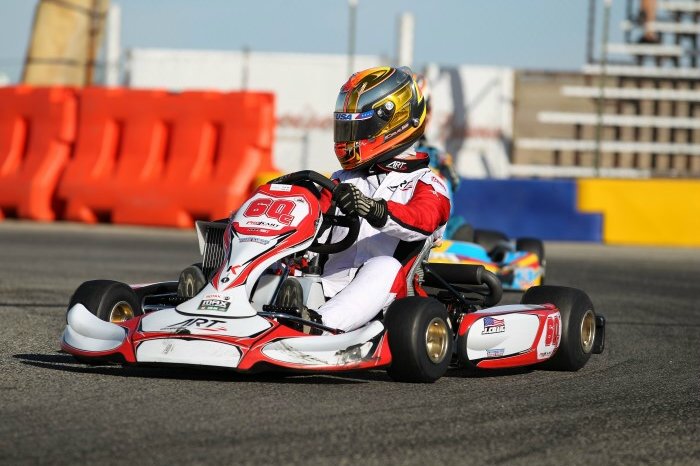 The 2013 California ProKart Challenge resumes next weekend as the Superkarts! USA regional series travels again to the ButtonwillowRacewayPark. On September 6-7, the fifth round of the six-race championship will be contested on the 7/10-mile course in Buttonwillow, California. Numbers have been stellar throughout the year, and with drivers battling for championships, preparing for the California PKC finale at the Streets of Lancaster Grand Prix later in the month, and of course preparations for the SKUSA SuperNationals in November, the weekend should have an awesome turnout with a full paddock. Visiting the facility for the second time in 2013, this event will utilize the Kart #1 configuration – this time in the clockwise direction – which is a first for the series and will add to the excitement and challenges of the weekend’s racing.

With two races left in the 2013 California PKC season, and one drop allowed toward the final point standings, all of the championships are still up for grabs – with drivers looking to cement their names in the hunt following the action at Buttonwillow. Four wins in four rounds has rookie Billy Musgrave leading the Extreme Karting/Vemme S1 Pro Stock Moto championship. A complete sweep in round four extended the point lead for the 2012 S2 SuperNationals champion, as former series champ Jimmy McNeil and Ryon Beachner are left to challenge. Three straight feature wins for Jake Craig in the Pure Karting TaG Senior division have him atop the standings. Craig also earned maximum points at the fourth round, and leads Mason Daughters and Mike Herda by a comfortable margin.

Connor Wagner continues to be the driver to beat in the Buddy Rice Karting S2 Semi-Pro Stock Moto class standings, which has been very competitive in the California PKC program. Round one winner Robert Marks is second with first-time winner Don Whittington now holding the third spot in the title chase. Three drivers in the Leading Edge Motorsports S4 Master Stock Moto standings are separated by just 11 points after four rounds of racing. Round two winner Willy Musgrave holds the advantage over Ken Schilling and Darrell Tunnell.

Billy Cleavelin needs just one more solid weekend before he can lock up the Mike Manning Karting TaG Master title. Four wins in four rounds of racing have him well out in front in the standings, as Ethan Wilson and Kevin Manning trail. Luke Bianco remains the driver to beat in the Leading Edge Motorsports S4 Magnum Stock Moto category, with Ken Manning and Rick McAllister giving chase. The 2 Wild Karting S3 Novice Stock Moto standings has Gianfranco Casadei out front and in control heading to the final two rounds of the season.

As it is on the SKUSA Pro Tour, Jarred Campbell leads Carter Williams in the SwedeTech Racing Engines S5 Junior Stock Moto standings. Campbell has four straight feature wins, with Williams holding second in the title chase and Saundra Kirby leading the fight for third. Williams took over the point lead in the Phil Giebler Racing TaG Junior class following a runner-up finish back in June. Brenden Baker now trails by a slim 16 points, with Willy Axton holding down third entering round five. The Sunshine Daydream Creations TaG Cadet class continues to excite the crowd each and every weekend. In the standings fight, Ryan Schartau has two wins to his credit, and holds a solid lead over Trenton Spark and Jackson Logsdon. Both the TaG Junior and TaG Cadet classes will welcome Pro Tour competitors Anthony Gangi Jr. and SummerNationals double winner Dylan Tavella – all the way from New York – which only increases the depth of the competition at the California ProKart Challenge.

Pre-entry for Round 5 of the California ProKart Challenge is available now at www.skusastore.com until midnight on Wednesday, September 4. Racers will hit the track Friday, September 6 as the California PKC will host a full day of practice. Reserved pit spots are recommended, and are available for $30. Gate hours and hotel accommodations are listed at the SKUSA event page, available at the following LINK. Racers are reminded to hang out for the podium ceremonies once again, as Kutscher and the SKUSA operation is planning another ample raffle prize drawing for those in attendance. Also, mark your calendar for the season-ending Awards Banquet, scheduled for the evening of Saturday, October 26 – with details and the venue to be announced in the near future.

Superkarts! USA would like the thank the following companies, in addition to the support of the class sponsors, for their aid toward the 2013 season: MG Tires, Mothers Polish, Honda/HPD, VP Racing Fuels, Motul, MIR, and AiM. Stay tuned to www.superkartsusa.com for any late breaking news on the event, as well as updates on Twitter at @SuperKartsUSA and at Facebook.