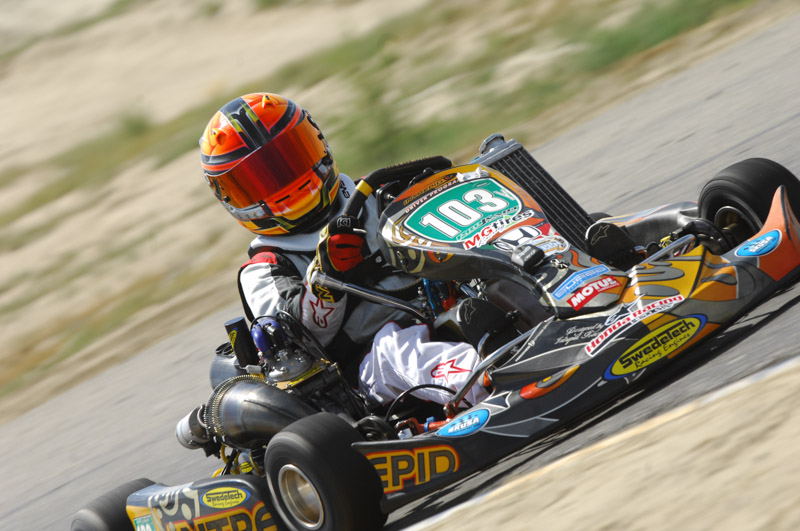 Campbell drove to a weekend sweep in S5 at the SKUSA SummerNationals (Photo: On Track Promotions - otp.ca)

In 2007, the S5 Junior Stock Moto category was introduced to the United States karting scene. Superkarts! USA was looking for a way to give young drivers a taste of six-speed power next to them, as shifterkart racing has shown to produce some of the many talented drivers making up the professional ranks today. It also helped to create the SKUSA Stock Moto ladder system, as drivers make their way up from S5 into the S2 Semi-Pro division, and then onto the top level of the sport – S1 Pro. Over the past few years, a number of young drivers have moved up the ranks, beginning in S5 and up to the S1 headline category with success. As the class continues to grow across the country, the amount of names that could be added to that list increases as well.

This year, Jarred Campbell is among those looking for glory in the S5 ranks to set-up his progression within the SKUSA ladder system, and has been named the EKN Driver of the Month for July following his performance at the SKUSA SummerNationals at the Grand Junction Motor Speedway in Colorado. The West Sacramento, California pilot swept the entire weekend, earning maximum points toward the SKUSA Pro Tour championship that will be decided at the SKUSA SuperNationals XVII outside the Rio All-Suite Hotel and Casino in Las Vegas.

Campbell began the perfect weekend in Colorado with the pole position in round three. Posting a 53.917-second laptime in the qualifying session, Campbell just nipped out defending series champion Jim McKinney by just 65-thousandths for the first grid position in heat one. The opening lap saw Jarred lead all eight laps to a 1.3-second advantage. That margin was cut short as round one winner Carter Williams closed up to just three tenths back and stole the fast lap of the race. Starting on the pole position, Campbell held the lead through the opening lap and felt the pressure of Williams the entire 18-lap event. When the checkers fell, it was Jarred scoring his second Pro Tour victory of the season with Williams just three tenths behind. He would also add 10 bonus points with fast lap of the race and secure a perfect score on the day.

The following day for round four, Campbell continued his reign at the top of the order of the S5 category. He would better his time from Saturday, posting a 53.691-second fast lap in the session to earn the pole position by over one tenth of a second. As he did previously, Jarred led all eight laps of the first heat race, this time pressured by Raul Guzman. Picking up the pace in heat two, Campbell drove to a near four second advantage in just eight laps, placing him once again in the P1 grid position for the main event. The 18-lap battle was his once again, breaking away early as the rest of the field fought for position. Running on cruise control with the fast laps of the race, Campbell drove to victory for a third time, and another perfect score for the round.

Three straight main event victories has Campbell leading the SKUSA Pro Tour standings by 75 points, with Williams in the challenger position. Factoring in the drop, it’s just 55 points that separate the top-two, making each and every lap at the SKUSA SuperNationals in Las Vegas come November so crucial to the championship chase. 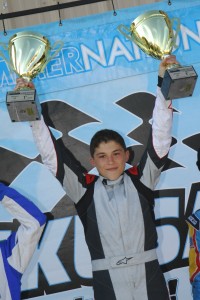 Chassis: Intrepid
Engine/Engine Builder: Honda CR125/SwedeTech Racing Engines
Sponsors: SwedeTech Racing Engines, Champion Intrepid Racing, Hunt and Sons Inc., Relentless Motorsports
Series You Compete In: SKUSA Pro Tour, California ProKart Challenge
Years In Karting: 5
How did you get started in karting? April 27, 2007 – I broke my back racing motocross, Mark Filkill was a friend of my dad’s and his son was in kart racing. By January 2008, I began karting.
What has been the high point in your racing career? Winning a Duffy in 2009
What are your goals in racing? To become a professionally paid racer
In a few words, how would you describe your driving style? Aggressive and smooth
Funniest moment at the race track? Ashlie Couch hit a rabbit at PrairieCity

What do you do when not at the track? I fish and do chores
What are your goals outside of karting? become a straight A student
What type of street car do you drive? None
What type of street car would you like to drive? 66′ Nova all red with a mini tub and a 454 big block
What are your pet peeves or things that irritate you? Know-it-all’s or stuck-up’s
What do you think could be done to improve the sport of karting? More sponsors and cut the cost on everything
What are your favorite aspects about the sport of karting? The good habits it teaches you to become a great driver and how it helps guide you to a successful career

One thought on “eKartingNews.com Driver of the Month – July 2013 – Jarred Campbell”