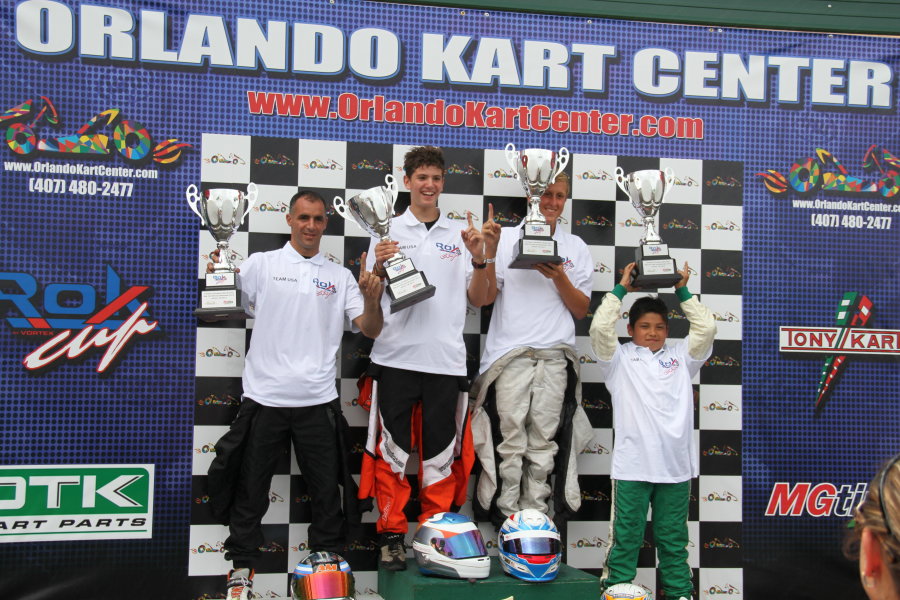 Rok Cup USA awarded Category Winners fully-funded entries into the Rok Cup International Final this weekend, from results of the Rok Cup USA Championship.  Now known as TEAM USA, winners of the Mini Rok, Rok Junior, Rok Senior and Rok Master Categories will travel to South Garda Italy this October to challenge Rokkers from around the globe in their quest for an International Final win.  Officials promoted the first-ever Rok Cup USA Championship, at Orlando Kart Center, offering the prize to drivers that participated in a culmination of Rok Cup USA Regional Events throughout the year, all for a shot at making Team USA.  With LIVE video and timing coverage on the Rok Cup USA Live Page, along with TuffTV in attendance recording the action for later broadcast, excitement was in the air for both event-attendees and online viewers around the globe all weekend long. 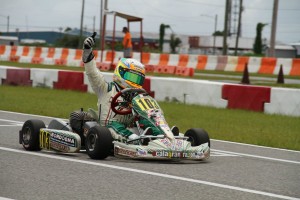 Mini Rok
From the start of the event, it was evident that nearly any of the Mini Rok entrants were capable of taking home the top prize, setting up close competition in the category.  Close Qualifying set the tone of the event in Mini Rok, with Rok Cup FKCS Region regular Vincenzo Sarracino taking the Pole over Rok Cup Orlando Kart Center Region Champion Mathias Ramirez and Rok Cup Homestead Karting Region race winner Tyler Gonzalez to set the stage for all three Heat Races.  Throughout the Heat Races, Ramirez wasted no time to maintain the point, but had to work for it with Sarracino and Gonzalez making chase.  Orlando Region regular Phillip Varner, Homestead Region regular David Morales, and Rok Mini regular Kollin Stuart found speed to challenge for the top spots, setting up an exciting Final Phase.  In the Pre-Final, the five Mini Rokkers would do battle from green to checkered, with Ramirez barely edging out Gonzales at the Stripe.  When all their efforts came down to the Final, Ramirez, Gonzalez, Varner, Sarracino, and Stuart put on an amazing show of talent throughout the first half, switching out the point throughout each lap.  Half-way thru the Final, Gonzalez suffered a retirement, allowing Ramirez to edge out into the lead, leaving the remaining three to battle for second.  At the checkered, Ramirez took the win and the fully-funded trip to the Rok Cup International Final, with Varner behind him for second, and Sarracino third. 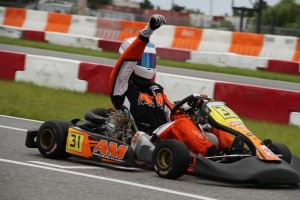 Rok Junior
With equal, spec Vortex-Rok engines, Junior Rok drivers again impressed the crowd all weekend with amazing racing.  Starting with Qualifying, Rok Cup Region Homestead Karting Champion Jordan Perry grabbed the Pole narrowly over Rok Cup Region FKCS regular Ryan Norberg, and Rok Cup Orlando Region Champion Michael DeQuesada.  Going into the Heat Races, all three Rokkers would not only battle each other, but have to try and fend off other challengers in the likes of Sebastian Sierra and Ignacio Salvucci.  After taking the Pole in Qualifying, Jordan maintained his spot taking the win Heat 1, however Salvucci became a threat with his wins in both Heat 2 and Heat 3.  In the Pre-Final, Jordan and Salvucci would look as if they would steal the show by taking first and second respectively, with Norberg third and regular Rokker Sasha Brun-Wibaux fourth.  Taking advantage of Rok Cup participation bonus, Norberg and Brun-Wibaux would start the final in the front row, but Perry immediately showed his strength from the start, taking the point and a commanding lead early on, while Norberg, Brun-Wibaux, and Sierra would battle for second honors, and Salvucci creeping up on the pack.  After quarter distance, both Norberg and Perry retired with separate unfortunate mechanical incidents, allowing Salvucci, Sierra, and Brun-Wibaux to take the battle through the Final.  At the checkered, Salvucci’s efforts awarding him the win and the well-deserved trip to Italy, with Sierra coming home second, Brun-Wibaux third, and hard-charger Kayla Stuart coming home fourth. 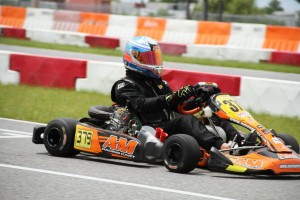 Rok Master
Although short on entry, Rok Master Category was never short on excitement as Rok Cup FKCS Region Points Leader Ariel Castro struck first by taking the Pole in Qualifying over Gonzalo Aparte, and Thomas Hankinson respectively.  Sprint Car regular Dennis Misuraca made his first appearance in Rok Cup competition with a respectable fourth in Qualifying, followed by Rok Cup Ordlando Region regular, Junior Malafai.  Castro took all three Heat Races, however Aparte dropping out of Heat 1 with mechanical issues allowed Hankinson to even up heat race points over Aparte, heading into the Final Phase.  In the Final, Castro really showed his dominance by jumping out front at the green, never yielding all race, taking the checkered by nearly 3-seconds over Aparte and Hankinson to win the trip to Italy.

Rok Senior
Perhaps the most electrifying category of the event, Rok Senior highlighted the viewership, both at the event as well as online viewers of the live video of Rok Cup USA Live.   First shots were fired in Qualifying when Rok Cup FKCS and Orlando Kart Center Region regular AJ Myers captured the Pole on lap two of Qualifying, holding the position throughout the session, followed by Filipe Vargas and Rok Cup FKCS Region regular Dominic Tesoro.  The three Rokkers started out the Heat Races by finishing in the same order in Heat 1, however chasing them down was Rok Cup Orlando Kart Center Region Champion Eddie Rodriguez, and Rok Cup FKCS Region regular Austin Jordan.  Myers would show his dominance taking Heat 2, with a great battle for second between Tesoro, Rodriguez and Vargas.  History repeated itself again in Heat 3, setting up the Final Phase.  After a sure weekend for Myers was proving true, mechanical gremlins would set Myers to the sidelines on the very last lap of the pre-final after what looked like a perfect weekend for Myers, allowing the win to Vargas with Tesoro second and Rok Cup Homestead Karting Region Event Winner Konrad Czacyck third, William Isaias fourth and Rodriguez fifth.  Even though Myers retired from the Pre-Final, due to a regulatory Regional Participation incentive, Rodriguez would start the Final from the Pole, with Myers to have his work cut out for him starting mid-pack, and Vargas starting at the tail of the field.  At the Green, Myers launched into the top 5, followed by Vargas, while Rodriguez took the point.  Tesoro and Jordan would swop the top spot with Rodriguez repeatedly throughout the opening laps, making for fantastic racing, while Vargas and Myers sliced through the field on their way to join the battle for the lead.  After the half-way point, the battle for the lead was thick with all five drivers in the chase, fighting for every inch, every lap.  The exciting battle would go right down to the final lap, when driving standards decisions would spread out the group allowing Myers to walk away with the final lap and the win, with Vargas a ways back in second and Rodriguez third.  Myers would round out Team USA with his win, and the Italy trip, capping off an exciting day of racing. 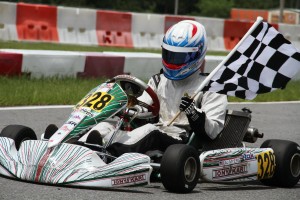 With the Podium and the Italy awards, the series looks to prepare Team USA for the licensing and arrangements for the 2013 Rok Cup International Final, October 16-19 at South Garda, Italy.  Team USA will receive Travel, Hotel Accommodations, Kart/Motor Rental, Tires, Fuel, Pit Spot, and of course the entry into the event.  Rok Cup USA will provide updates throughout Team USA’s journey, as they prepare to battle the world in Italy this Fall.

About ROK Cup
The ROK Cup is an internationally successful program, offering consistent rules packages accepted around the globe.  Utilizing Vortex-ROK equipment that has promoted parody throughout the program for over 10-years, ROK Cup is an FIA Authorized International Series, operating in 26-countries, yielding 300-drivers for the 2012 ROK Cup International Final, which is traditionally held each year at South Garda.  For more information about ROK Cup, please visit www.rokcup.com  or email usa@rokcup.com