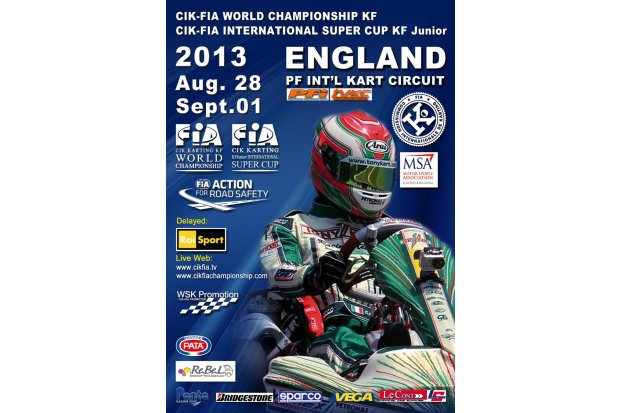 THE KF WORLD CHALLENGE STARTS FROM ACROSS THE CHANNEL

The top events of international karting concentrate in September in this 2013 season. All the European Championships were awarded, and it is now time for CIK-FIA to focus on the ‘world tour’, beginning with the opening event in England on the PF International Circuit of Brandon. The facility – created by Paul Fletcher – which features the 1,382 metre long racetrack rises up in Brandon, a small village near the town of Grantham, Lincolnshire. The first round of the CIK-FIA World Championship for the KF category will be hosted by this racetrack from 28th August to 1st September. The 2013 World KF championship has got two rounds in schedule: the second round will take place in Bahrain, on the Viva Karting Track in Sakhir, from 19th to 23rd November. On schedule also the CIK-FIA International KF Junior Super Cup, a single round event reserved to this category.

READY FOR THE FIRST CHALLENGE IN KF.

To have a rough idea of what we should expect from the World Championship, we may refer to the results of last month’s European Championship, won by the Dutch Max Verstappen (CRG-TM-Vega). The CRG driver, in the second round of Ortona (Italy) managed to close the gap with the Danish Nicklas Nielsen (KosmicVortex-Vega), winner of the first round in Zuera (E). The latter is ready to take his revenge in the World championship, even though we must not forget the French Valentin Moineault (Art GP-TM-Vega), second after his brilliant success in Italy. Keep an eye also on the Swedish Christian Sorensen, (Tony Kart-VortexVega), who finished third in the European Championship.

A SUPER CUP FOR THE KF JUNIOR.

The KF Junior is going to be as unpredictable as always. The European Championship standings says it all, with three drivers who finished with the same score: the two English Lando Norris and Daniel Ticktum (both on FA Kart-Vortex-Le Cont) – who won a round each – and the Dutch Martijn van Leeuwen (Zanardi-TM-Le Cont). Norris won the title thanks to his overall results, preceding Ticktum and Van Leeuwen. There are all the ingredients for an eventful and thrilling Final of the CIKFIA International KFJ Super Cup.

THE WORLD CHAMPIONSHIP LIVE IN STREAMING.

The CIK-FIA events, promoted by WSK from this season, can enjoy a wide media coverage: all the images of the race in Brandon will be available live in streaming on the official websites www.cikfia.tv and www.cikfiachampionship.com. On Sunday 1st September the TV programme will be opened by the drivers’ presentation and will go on until the end of the finals. On Tuesday 3rd September the delayed broadcast of the KF and KF Junior Finals on Rai Sport2, while on Friday 6th, on the same channel, the special report with the recap of the whole weekend in England.