After two months, the eKartingNews.com Driver Rankings is taking shape, putting the best drivers of the season up toward the top of the standings. A number of races took place in July, adding points to a number of drivers along the way. One consistent remains, Fritz Leesmann (CRG) at the top. The Californian continues to set the bar for the Stock Moto category, and increases his point total heading into the final stages of the 2013 season.

Leesmann’s total, while just two points more, but put him at the 6600 total mark. The SKUSA Pro Tour S1 point leader is in position to earn his second straight, and third title in four years this November. Second place, Billy Musgrave (Tony Kart), increased his point total off the SummerNationals results, placing sixth and second. The Southern Californian is now just 156 points back of Leesmann. Third, despite a rough SummerNationals, is Sabré Cook (CRG). Ill throughout the second stop of the Pro Tour, Cook improved to move up to third. A few weeks following the SummerNats, it was discovered that the CRG-USA driver was suffering from an infected gull bladder. Successful surgery at the end of July have put her on the sidelines while she recovers, with the hope of returning to the seat at the end of August.

Jumping up three spots to fourth is the top S2 driver in the standings – Ryan Kinnear. The Champion Racing/Intrepid scored his first Pro Tour victory at the SummerNationals, against a large S2 field, and now holds the championship lead heading into the SuperNationals in November. The ‘Flyin Hawaiian’ Alec Gumpfer remains in the fifth position, as the Pure Karting/Tony Kart pilot, increased his score but did not improve his spot in the standings. Gumpfer drove to his first S1 top-five finish on the Pro Tour, and putting himself as a podium contender for Vegas.

Down three positions to sixth is Utah driver Tyler Bennett (Tony Kart). A podium finisher at the SummerNationals at his home track, Bennett was unable to match the performance this time around in Colorado. Jimmy McNeil (CRG-USA) also dropped, moving to seventh, despite recording his first top-five finish on the Pro Tour. Moving up to the top-10 in the standings, up from 23rd, is veteran Mike Beeny (Tony Kart). The Utah driver earned his first S1 podium at the SummerNationals, placing runner-up during Saturday’s main event. S2 driver Christian Schureman (CRG-USA) remains in the top-10, now ninth. S1 newcomer Lloyd Mack (CRG) enters the top-10, reaching the minimum six races thanks to his California ProKart Challenge and SKUSA Pro Tour campaign. 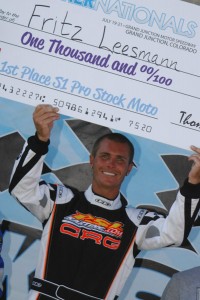 One thing remains the same in the Stock Moto categories, as Fritz Leesmann continues his reign over the Driver Rankings. Another win at the SummerNationals solidified him as the top driver in the SKUSA Pro Tour as he looks toward earning his third title in four years. In four years of the SKUSA Pro Tour, only three North American drivers have able to win when Leesmann is not standing on the top step of the podium – Clinton Schoombee at the SpringNationals 2010, Alex Speed at the SuperNationals in 2010 and Joey Wimsett twice last year. Leesmann’s ‘To Do’ list still includes one task – a SuperNationals victory. 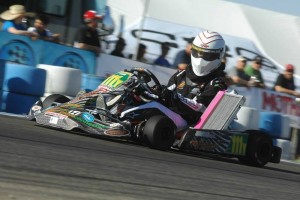 This year’s S2 Semi-Pro Stock Moto field is exciting. Over 30 drivers are fighting for every inch they can, looking to improve with each outing and making a name for themselves in shifterkart racing. One of the rising names is the Acceleration Karting’s Joshua de Losier. A TaG racer converted to shifterkart, the 18-year old is working under the tutelage of Curtis Cooksey, and making strides on the Pro Tour. This year, de Losier has finished all four main events inside the top-10, and finds himself seventh in the Pro Tour standings with a shot at the #3 SKUSA plate.