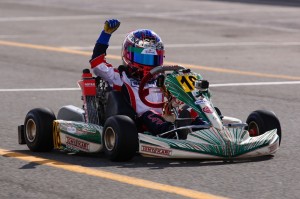 Matthew Latifi, a member of the Sofina Foods Drivers’ Development Program and the Ferrolati Corse Karting Team moved himself closer to earning his second straight Eastern Canadian Karting Championship title as he battled back to take the Sunday feature win. The weekend saw the talented ten-year-old racer earn trips to the top step of the podium in both Saturday Coupe de Quebec action and Sunday ECKC racing. Not without some drama, the Toronto native put on a gritty performance to secure enough points to lead the title chase with one round remaining in the 2013 campaign.

“We have been working hard with Mathew all year and with each weekend he just gets stronger and stronger,” comments Steven Chapman, engineer for Latifi. “He showed his class and skill by the way he bounced back in the final on Sunday it was a fantastic drive to the front, and he truly deserved the win.”

On Saturday Latifi was in cruise mode as he took second spot in timed qualifying followed by the win the prefinal. The day would end with a great run in the final as Matthew took first at the flags and the top spot on the podium.

Looking to keep his string of podium finishes on the season going, Latifi started the day right, going P1 in morning practice. In timed qualifying the Tony Kart driver would miss pole by a mere 6 thousands of a second. From his front row start in the prefinal, Latifi took the lead off the green and began to gap the field. A slight error had the driver tap the barriers and losing spots to the field as he recovered. Latifi would have to settle for a ninth place finish. Not one to give up, Matthew focused on the task at hand and from the drop of the green put on a charge. He would gain the lead by lap seven and cruise to a hard earned victory and a second trip to the post race prize giving ceremonies.

“Mathew is a true talent who will only continue to get stronger as time goes by because he is so hungry to be the best he can be,” continues Chapman from trackside at Goodwood Kartways. “He is one to watch for the future and is somebody Canadian karting can be proud of.”

The Eastern Canadian Karting Championship will, make it’s final stop of the 2013 season at the Mont Tremblant Karting Circuit in mid-September.

The Sofina Foods Drivers’ Development Program was created to help Canadian karting series offer young drivers a goal and a prize to work towards. In 2010 and 2011, the Sofina program supported the Eastern Canadian Karting Championship as well as Team Canada drivers going to the Rotax Max Challenge Grand Finals. The Sofina Foods Drivers’ Development Program is proud to support Canadian drivers reaching the international motorsports stage.

For more information about this release, please contact David Tennyson at davidten@h10media.com.