39 podium results and an increase lead in Manufacturers Cup chase 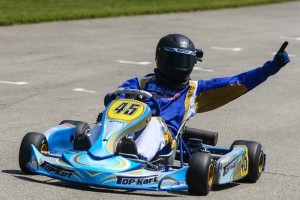 It was another dominating event for the Top Kart brand at this past weekend’s fifth round of the World Karting Association (WKA) Manufacturers Cup. Taking place at the Pittsburgh Int’l Race Complex just north of Pittsburgh, Pennsylvania, Top Kart USA would close the weekend with eight more victories and an astounding 39 podium results to add to their already stellar season. With a commanding lead in the Manufacturers Cup point’s race, Top Kart USA will look to add back-to-back titles to their resume.

With a host of drivers competing in almost every class of competition, the blue brand was often seen at the front of the field. Patrick Olsen would lead a sweep of the top three in Saturday’s Yamaha Senior program taking the win just ahead of Dakota Pesek and Chase Jones. Kody Evans, who made the switch to the Top Kart arrive and drive program, would finish sixth in his first day behind the wheel. Olsen would make it two for two as he took the top honors on Sunday and was followed across the line by Jones. Pesek would cross the stripe in fourth and Evans would make it four Top Karts in the top-five with his fifth place effort.

Zach Holden would add another Top Kart victory to the weekend’s total by taking the checkers in Saturday’s Komet Sportsman main event. Looking to repeat on Sunday, Holden would cross the stripe in sixth and will now shift his focus to the final round. Giovanni Bromante would add a pair of top-fives with a fifth place finish on Saturday and a solid third place podium effort on Sunday.

The Johnston duo would be at the front of the field in TaG Senior as Garrett and Jake would finish one-two in Saturday’s main event. Mark Books would make it three blue chassis in the top-five with his fifth place finish while Mason Chelootz and Julia Boos, in her first ever TaG Senior race, would finish 16th and 17th respectively. Jake Johnston would add another TaG Senior podium with a third place finish on Sunday while Boos and brother Garrett would finish seventh and eighth. Boos would improve on Sunday and claim a 15th place result. 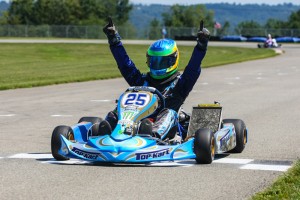 Four podium results would come from the Cadet Sportsman division, as Holden and Lance Fenderson would add a pair each. Holden would finish third and fourth throughout the two days of competition while Fenderson would add a pair of fifth place results. Bromante would be back behind the wheel in the Cadet Sportsman ranks with two eighth place finishes while Andrew Collins Jr. finished 14th and 12th .

Emerson Reed would continue his run of strong performances, as he was once again up front in the Yamaha Junior field finishing second on Saturday and third on Sunday. Kaden Harter added a third place result on Saturday as Sheldon Mills, Killian Keaveny and Kenlen Morse finished outside the top-ten. Harter would have a tough go of it on Sunday and eventually be classified in the 20th position while Mills would come home 13th. Keaveny improved to finish inside the top-ten in eighth on Sunday while Morse would cross the stripe in 11th.

Scott Ferris would be back on top in TaG Masters scoring another victory in his run for the championship as he would lead a Top Kart one-two finish just ahead of Bobby Cummings, who was relief driving for the injured Steve Schiewer. Cummings would maintain his position for Sunday to add another second place result while Ferris would drop two spots and finish third.

Patrick Olsen would add another pair of podium results to Top Kart’s total on the weekend as he finished second in both Saturday and Sunday’s Komet Pro main events. Dakota Pesek would also be seen in the top-five and would claim fourth and fifth place finishes for his on track efforts.

Holden would add another victory to his yearly total taking Saturday’s Yamaha Sportsman final, as Lance Fenderson would also stand on the WKA podium in fifth. Back to the track on Sunday, Holden and Fenderson would finish down the running order in sixth and ninth place respectively. Bromante would have a trying weekend in the Yamaha Sportsman class and would end with 11th and seventh place finishes. 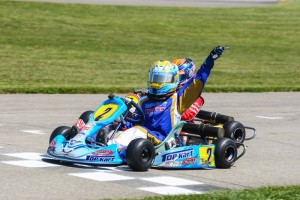 Three Top Kart USA drivers would stand on Saturday’s Parilla Senior podium with Garrett Johnston taking the win ahead of brother Jake. Mason Chelootz would score his best result of the weekend in fifth while Mark Boos would come home seventh. Calvin Stewart would finish just outside the top-ten in the 11th position. Sunday would see Garrett Johnston back on the podium with a second place result after starting inside the sixth row in the eleventh position while Jake would fall back to sixth. Stewart would finish 12th with Boos in 14th.

Killian Keaveny would improve on his Yamaha results in the Komet Junior division scoring a pair of second place results to close the weekend. Abby McLaughlin would also run inside the top-ten and finish seventh and eighth throughout the two days of competition. Alexander Kardashian would finish 16th on Saturday and after leading much of Sunday’s final, would settle for a sixth place result due to engine issues in the latter half of the race. Sheldon Mills would only see action on Saturday and would end with a 15th place run.

Top Kart USA would like to give a special thanks to all drivers, mechanics, families and sponsors that support our efforts to help drive the sport of karting and also the Top Kart brand.

With a website now complete, further information on Top Kart USA, McLaughlin Motorsports and Motorama Kart Parts can be obtained by contacting their offices at 317.870.3122 or visiting them online at www.TopKartUSA.net. The top Kart USA online store is now live and ready for orders. Visit Shop.TopKartUSA.net to place your orders today.