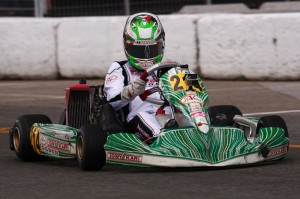 Gianfranco Mazzaferro, a member of the Ferrolati Corse Karting Team, continued a torrid pace of karting around the globe, this time heading to the legendary street circuit of Trois Rivieres, Quebec, just a short drive from his home in Montreal. With the most recent round of the Rotax Euro Max Challenge under his belt and a trip to the Western Canadian Championship checked off the list, Mazzaferro was happy to be on home turf. The action packed weekend hosted rounds of both the Coupe de Quebec and the Eastern Canadian Karting Championship (ECKC). Along with tuner Nick Cosco, the duo have been racing in Rotax Max Challenge events spanning several provinces and continents as they continue to amass a stellar rookie campaign.

“The results were not what we had hoped, but it’s nice to be in the title chase for the ECKC championship,” states Mazzaferro. “We were quick, but just didn’t qualify well on both days. Saturday was fun, charging up through the field in the final. I was able to make a pass pretty much every lap.”

The Monaco marked only the second Coupe de Quebec weekend GF has run this season. Saturday saw GF take eighth in qualifying. In the prefinal, contact on lap 2 send him back to 13th and he rallied back to finish ninth at the line. In the final GF used his Tony Kart to put on a passing clinic, moving to third by lap seven and taking the final podium spot in the 17 kart field.

In Sunday ECKC action, Mazzaferro was able to stay in the top five in all the racing sessions but struggled to break through to the podium. In timed qualifying, held under sunny skies, GF landed fourth on the time sheets. A good start in the prefinal put GF in the heart of the battle and he was able to come away with a fourth place finish and keep within striking distance to the new points leader. In the final GF got a great start grabbing P2 early on and holding that position for the first three circuits. The second half the race GF was in a huge battle with his nearest points rival for third place on track and would slide to fourth on the final lap, just missing the podium.

“Right now the focus is on the Nationals,” comments Mazzaferro. “For me that’s all I am thinking about. I really like Goodwood. It’s an awesome track. Other drivers have won the Nationals in Junior in their rookie year and I hope to do the same. The competition is tough, but my Tony Kart has been great all year and we should be fast. We have been getting great power from our Ogden UK prepared engines. I am really excited to get racing. With a ticket to Team Canada on the line, everyone will be bringing their A game. Nick (Cosco) and I will need to bring our A+ game.”

GF will rejoin the Ferrolati Corse Karting Team as they set their focus on the upcoming ASN Canada FIA Canadian National Karting Championships taking place at Goodwood Kartways near Stouffville, Ontario. The ECKC wraps up in September at Mont Tremblant Karting, just an hour north of Montreal.

For more information about this release, please contact Jeff Grist at jeff@sospublishing.com.

This news release was prepared by Secrets of Speed Publications.