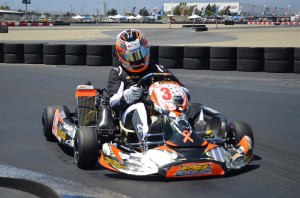 Matt Ostiguy finds the speed in the TaG Senior class at his most recent CalSpeed outing
(Photo: Joe Stalker – LAKC)

This past Sunday, Matt Ostiguy, a PSL SoCal GATORZ sponsored driver competed in only his third race of the season in the TaG Senior class in the Los Angeles Karting Championship (LAKC) series at the CalSpeed Kart Track at the Auto Club Speedway in Fontana, CA.

Matt started the Sunday practice session with a third motor to complete his CRG/Rotax set-up for the weekend.  Matt qualified 4th and moved up a position to finish third in the Heat race.

Matt started the Main race and continued to find speed as he moved up a position at the start of the race and then took the lead during the second lap, however after completing half a lap in the lead his fuel line disconnected and he lost power and did not finish the race earning his first DNF in over two years.

“After blowing two engines during practice Saturday and then finding the speed in my third motor on Sunday with qualifying fourth and finishing the heat race in third, I was really looking forward to the main – especially as I took the lead early in the race!”  Unfortunately a little bad luck caught up with us this weekend, but I am looking forward to next month and finding some more speed again with an awesome TaG package that Francois Doran and PSL SoCal can put together for me!”

Matt Ostiguy has completed his undergraduate degree in Mechanical Engineering (ME) at Cal Poly – San Luis Obispo, CA and is now a graduate student at the same school for his Masters in ME.  He is able to compete at the track this year during his Spring and Summer breaks, returning to campus in late September.

GATORZ Eyewear has signed Matt for the 2013 racing season as an official Ambassador and sponsorship: “We are excited to have Matt Ostiguy Racing back with Gatorz for 2013.  Matt’s enthusiasm and professionalism are the exact traits we strive for in an ambassador representing our brand.  Matt’s hard work and dedication has given Gatorz additional exposure in the Motorsports arena and we look forward to working with him in the year ahead.”

GATORZ is also offering a special 25% discount for all sunglasses purchased online at (http://www.gatorz.com) by simply entering the coupon code: MOST13 (all caps).

For the latest news on Matt Ostiguy, go to his web-site: http://www.MattOstiguy.com/ or follow him on facebook at: (http://www.facebook.com/#!/pages/Matt-Ostiguy-Racing/110966862266265
About Matt Ostiguy:
Matt has raced karts for the last 10 years, since he was 13 years old, starting at F1 Boston and F1 Outdoors in New England. After winning several Junior Karting Championships and his team earning the Vice-championship in the GT Pro Class in the (6 hour) Endurance Karting Championship on the East Coast, he relocated back to San Diego, where he was born. His team also participated in several 24 Hours of America Endurance Kart races at the Palm Beach International Raceway (formerly the Moroso Motorsports Park). He was also invited to participate on the USA Team in the 24 Hours of Le Mans kart race in France in 2007, finishing an impressive 5th place against some of the top teams in Europe, including the Honda Factory team.

20 years in the making, Gatorz is no stranger to the visionary world. With age comes respect and wisdom. Gatorz breathes technology and holds patents to blueprints that are years ahead of its time. While touring the futuristic laboratories that have become Gatorz, we stumbled across a hidden gem… 1990’s dead stock; the original frames that started it all. One look at these vibrant classics and we knew it was time to enter the plastic paranormal and “save face.” We arrived at this point, aged like a fine wine, with 20 years of technical knowhow and optical knowledge. Today’s fashions and trends represent the future and pay homage to the past. Gatorz has developed a new collection that caters to all. Everyone has their own vizion and we create products to see those through. Make your vizion crystal clear. Face it; today you gotta bring your “A” game. Time to save face. Welcome to the new Gatorz…