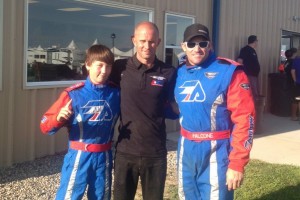 Team KartSport North America wasted no time proving that the newly-released Arrow X3 is a winning model, collecting both the TaG Junior, as well as the TaG Masters victories in the X3’s debut at the 2013 SKUSA SummerNationals in Grand Junction, Colo. Team KartSport driver, Davey Manthei, captured his first-ever TaG Junior win, while Scott Falcone won the TaG Masters final. KartSport drivers, Jacob Knueven, Derek Dignan and Will Owen furthered the strong performance of the Arrow X3 with compelling races in their respective divisions.

On the first of the two-day event, Scott Falcone scored the TaG Masters final win from the pole position he earned by winning Heat Two. Falcone maintained his pace and gap on the field even though he was challenged for the lead during the final laps, eventually taking his KartSport Rotax-powered Arrow X3 to the first of the team’s wins of the weekend. Falcone was able to secure yet another TaG Masters podium finish of third place on the second day.

Other KartSport team drivers, including Davey Manthei, followed Falcone’s example and found their speed on the second SKUSA SummerNationals event day. Manthei stole his first-ever TaG Junior win with a last-lap pass for the lead, after following the leader closely for the entire race. His exciting win and pass for the lead came with only a few corners of the challenging 9/10-mile circuit left to go.

In the TaG Senior division, it was Jacob Knueven who led the way for the KartSport team of drivers, with a ninth-place finish that didn’t match his race efforts and superb driving. Following an engine failure in his second heat race, Knueven was forced to start at the tail-end of the 42-kart field of TaG Senior drivers with a backup engine. Knueven drove an exciting race from last to ninth place, passing multiple karts every lap and clocking lap times faster than the race winner.

KartSport TaG Senior drivers, Derek Dignan and Will Owen, had similar strong runs, without the results they deserved. Dignan qualified fourth and Owen in ninth, however, disappointing race incidents caused unfortunate finishes for both drivers. Owen was able to recover from his Heat One incident and ended up passing 26 karts to finish in the 16 position.

KartSport North America and their team of drivers will be back in action this upcoming weekend, Aug. 16-18 at the World Karting Association Manufacturers Cup Race at Pittsburgh International Race Complex in Wampum, Pa. Drivers, Roger Ralston, Jr., Derek Dignan, Gresham Wagner and Jacob Knueven, will all compete for Team KartSport North America.

Please contact the KartSport North America office at (855)-KARTSPORT or visit their website at www.kartsportna.com with any questions.