To close out its inaugural season, the United States Pro Kart Series – presented by Bridgestone, FranklinKart.com, and L&T Manufacturing -will go out in style at the Pittsburgh International Race Complex. The fourth and final weekend of the schedule – sponsored by freem and Steiner Electric – is set for September 6-8 at the Wampum, Pennsylvania circuit, where the final victories of the season will be earned and the seven class championships will be decided. The three day event is set to welcome over 100 racers to compete in rounds seven and eight, and celebrate the inaugural season with the year-end awards ceremony.

To close out 2013, the USPKS series will host the year-end awards ceremony Sunday evening following the day’s on-track action at PIRC. The in-formal banquet is scheduled for the banquet hall located at the track, with appetizers, finger foods, drinks and of course the many year-end awards and prizes. All class champions will be presented their point standings trophy, with a championship ring and leather jacket to be personalized at a later date. Awards will also be presented to the top-five in the standings, in addition to drivers who competed in all four events along with a drawing for a KartLift Pit Cart.

“I remember the first Route 66 Sprint Series awards ceremony we held,” reflected Mark Coats – promoter of the United States Pro Kart Series. “We held it right on the front straight of Mid-State Kart Club and it was a very memorable moment for racers and for me. I want our racers to look back on the first year of the USPKS the same way, so it’s fitting that we end it in similar fashion. While it may not be a glamorous occasion, but thanks to the many series supporters and sponsors, we will be giving away close to $40,000 in awards and merchandise. Gas cards, free entries and free hotels all for the 2014 season are among the prizes. We encourage everyone to stay after and delay their return home for just a few hours of fun and recognition to those who earned it.” 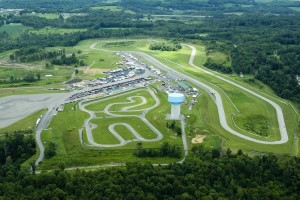 The Pittsburgh International Race Complex will host the final two rounds of the USPKS series, in addition to the year-end awards ceremony on September 6-8

The Pittsburgh weekend schedule will be different from the previous double round weekends. Saturday’s round seven action will see a five minute qualifying session, followed by two 10-lap heat races to set the line-up for the 18-lap main event. Sunday’s format will be different to allow time for the year-end awards ceremony – giving a five-minute qualifying session followed by a 14-lap Prefinal, then a 22-lap main event. Following Friday’s five-round practice day, the series will host a complimentary cookout for all of those in attendance. During the dinner, a ‘Cornhole Tournament’ will complete the day’s action, with more information available at eKartingNews.com in the near future.

With the final two rounds forthcoming, eyes are on those who are in the championship contention. The Leopard Pro championship has Kyle Kalish at the top of the standings, riding off his best weekend of the season in Dousman. A victory and runner-up result places him 150 points out front, with Joel Jens and Derek Dignan trailing. The entire Pro field will be racing once again for a $750 payday for each main event victory, with another $2,000 up for grabs to any driver to secure victory on both days, presented by USPKS and HYTORC. Mike McAndrews has a stranglehold on the Leopard Semi-Pro and will close out the series looking for the inaugural title. For the Leopard Masters champion, an entry to the Championkart International Final in Jesolo, Italy is on the line. The October 6 event will welcome the USPKS title winner, using a spec Parolin chassis with FIM engine supported by Russell Karting Specialties and the Parolin Management Team. Three drivers remain in the fight with Chuck Gafrarar at the top of the order, winning the opening round and the most recent. Just 90 points back is Brian McEvoy, who has yet to win a feature on the year. Two in Pittsburgh could propel him to the top. Brian McHattie is third, about 140 points back of Gafrarar with two DNFs, needing a solid weekend at his home track.

What was thought to be a done deal, the Yamaha Senior chase could go down to the wire between Joel Jens and Tony Jump. Jens scored the opening four feature wins, but Jump fought back to earn both in Dousman to close to within 140 points in the standings. The Yamaha Junior fight is down to just two, with Zach Holden and Emerson Reed out front. Holden has three wins on the year, and leads over Reed by 125 points. Reed swept the New Castle weekend while Holden dominated in Dousman. Two victors last month pushed Sam Mayer to the top of the championship case in Yamaha Cadet. The Wisconsin driver – who became the fifth different winner of the season and first to earn a second victory – now leads by 155 points over Neil Verhagen. The Yamaha Rookie division has also seen five different winners in six rounds of racing, with double race-winner Mark Fineis holding the top spot in the standings. Griffin Kunz also earned his first win of the season in Dousman, ending his string of three runner-up finishes, and is just 70 points back in the title chase.

Registration for the final two rounds of the United States Pro Kart Series is available at the series website HERE along with the event schedule and hotel information on the main page at www.uspks.com . Be sure to ‘Like’ USPKS at Facebook.com/Uspks for updates, including the release of the 2014 schedule in the coming days.