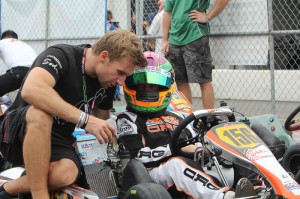 After a very successful Rotax Max Challenge United States Grand Nationals, OgdenUSA powered driver Horatio Fitz-Simon would be back in action at the Redline Oil Karting Championship. Looking to attain a ticket to the Rotax Max Challenge Grand Finals Micro & Mini Invitation later this season, Fitz-Simon went on to take the main event victory and secure the championship and will now be part of Team USA at the prestigious event.

Switching to OgdenUSA power at the Grand Nationals, Fitz-Simon would drive to an impressive seventh place result in the Rotax Mini Max division even after missing a day and a half of testing during the event week. Showing an improvement in speed and advancing up the running order with his Ogden USA prepared Rotax, Fitz-Simon competed with some of the nation’s top Mini Max pilots and scored a top-ten result.

“Horatio drove extremely well in Mooresville,” explained Paul Howard. “The facility was new to him as it was for many, but Horatio also switched engine builders, chassis brands and teams leading up to the event. For a young driver to overcome so much change at one time proves that he has the skills and abilities to challenge for race wins and championships for years to come.”

Departing Mooresville upon event conclusion, Fitz-Simon immediately shifted his focus and to the Redline Oil Karting Championship. A ten race series with the championship winner receiving an invitation to the Grand Finals, Fitz-Simon and his Ogden USA powered kart would attend the latest round in the hopes of standing on the top step of the podium.

Jay Howard, driver coach for Fitz-Simon went on to add, “I am really happy for Horatio and his family. They worked really hard in Mooresville during the week of the Grand Nationals and they deserve this ticket. Good luck in New Orleans.”

For more information on Ogden Racing Engines USA, please visit them online at www.OgdenUSA.com or contact engine builder Paul Howard at 317.225.6199 or Jay Howard via e-mail at Jay@OgdenUSA.com.