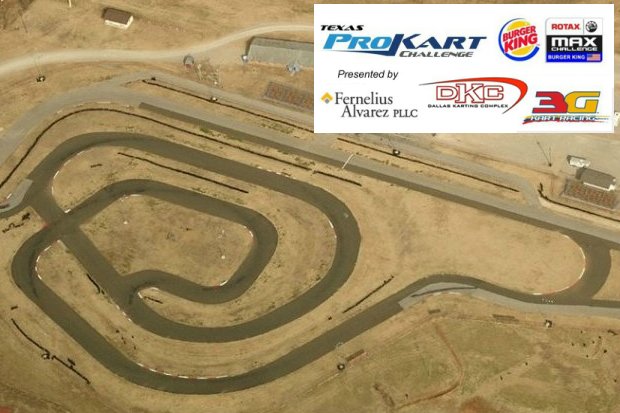 The 2013 Texas ProKart Challenge season – presented by 3G Kart Racing/Burger King®/Fernelius Alvarez Attorneys/Dallas Karting Complex – is a true test of endurance and skill. All five circuits on the calendar provide the drivers and teams with a unique course and challenge of its own. Next weekend – August 16-18 – the series travels to the challenging 8/10-mile Oklahoma Motorsports Complex in Norman, Oklahoma, which is considered by many as the top circuit in the United States. Many of the top drivers in the Superkarts! USA and US Rotax Max Challenge programs in the country call the Texas PKC program home, and will be among the many competing for over $2,000 in awards on the weekend.

Pre-registration for rounds seven and eight are open until midnight, August 11th at the following Link. The Texas PKC would like to remind competitors to not bring fuel and oil to the track, as the spec fuel and oil must be purchased directly from the track. Pit spots will be assigned on a first come, first serve basis and can be organized through the track office. The host hotel for the event is the Sleep Inn & Suites in Norman, Oklahoma, located just minutes away from the track alongside I-35. The Texas PKC block of rooms will remain on hold until August 12, with an excellent rate of $75 per night. Call 405-307-0919 to secure your rooms.

Championships are taking shape, with the contender list narrowing down in the best eight of ten point standings. With four events left, drivers have the chance to put themselves back in the hunt or to take a commanding lead. Three drivers have won over the six rounds in the Pole Position/DR Kart S2 Semi-Pro Stock Moto division, with Miguel Lopez as the top driver heading into the final four rounds. Recent SKUSA Pro Tour race winner and current point leader Ryan Kinnear sits second with Garrett Boone in third. The SwedeTech S4 Master Stock Moto category has been a back-and-forth affair between friends Jordon Musser and Chris Jennings. Each have three wins, both earning double-win weekends while splitting the North Texas Karters weekend. Musser however has a 180 point advantage in the championship chase with Jorge Galvan in third. It’s a tight fight in the J&T Racing S5 Junior Stock Moto class as three enter the OMC weekend sitting within 150 points. Nathan Adds has four wins, but has Jesse Woodyard and Raul Guzman chasing him down.

The TaG Cadet standings have Max Hewitt now holding the top position heading into rounds seven and eight. Four podiums, including a victory, have him out front of Luis Alfonso Perez Pena and Riley Dickinson. TaG Senior has three drivers in the hunt as Wyatt Maness leads over a closing Brian LaBarbera and Michael Bartholomew. Jesus Robles has a commanding lead in the TaG Master class with Redrigo Rejon on top in Champion Racing/Intrepid TaG Junior.

Micro Max has Max Waithman out to a commanding lead, thanks to three straight main event victories. Ethan Arndt and Cash Tiner trail in second and third. The Enertech/Chase Racing Mini Max category has seen five different winners in six rounds of racing, as Luis Alfonso Perez Pena leads Max Hewitt by just 15 points. Parker Chase – the opening round winner – sits third in the chase. Two wins in Denton have Jesse Woodyard out front in the Champion Racing/Intrepid Rotax Junior standings. Nathan Adds and Thomas Beaudoin are the top challengers heading into the Norman. Four wins in Denton put Alex Tartaglia at the top of the standings in Rotax Senior and DD2, while Steven Clark and Lance Lehrman control the point chase in Rotax Masters and DD2 Masters sponsored by Dallas Karting Complex.

To find out more about the Texas ProKart Challenge program and event details for the Oklahoma Motorsports Complex, be sure to visit www.texasprokartchallenge.com and ‘Like’ them at Facebook.com/texaspkc