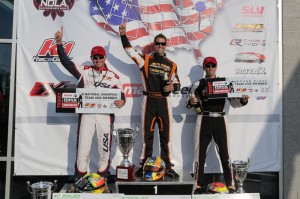 Alan Rudolph and Rene Martinelli made it two PSL/CRG drivers on the DD2 Masters podium, and both will once again be part of Team USA at the Rotax Max Challenge Grand Finals
(Photo credit: Ken Johnson – Studio52.us)

Trois-Rivières, August 8, 2013 – Taking on the most anticipated Rotax event on the US karting calendar, Team PSL Karting would head to the GoPro Motorplex in Mooresville, North Carolina this past week for the 2013 Rotax Max Challenge United States Grand Nationals. With national titles and Rotax Max Challenge Grand Finals (RMCGF) invites on the line, Team PSL Karting pilots would need to bring their A-game as they competed against the top Rotaxians in the US. Fielding a team of six drivers in three classes, the world’s #1 CRG distributor would join forces with PSL Atlantic, as Canadian team drivers were racing north of the border as well. Splitting up staff mechanics and bringing in factory technicians, the PSL/CRG package would again be on top as Alan Rudolph claimed back-to-back DD2 Masters titles. Rene Martinelli would make it two PSL drivers on the DD2 Masters podium, while two team members also scored top-ten results in the ultra-competitive Mini Max ranks.

“The US Nationals was absolutely one of the toughest events we have competed in for 2013,” explained PSL USA’s Team Manager Andrew Campbell. “The best of the best showed up, which made for a very challenging week – but that is what we are here for, that’s why it’s called racing.” 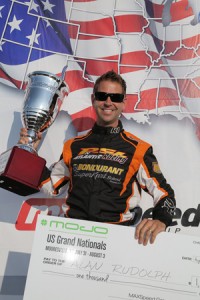 Heading into the US Nationals with his Team USA invite secured via his Rotax Challenge of the Americas championship, veteran karter Alan Rudolph was able to focus on defending his DD2 Masters title. Starting off his campaign with the pole position in the over-32 category, Rudolph kept focused on the task at hand, claiming the ensuing wins in all three-heat races. The prefinal however would see his streak of perfection come to an end, as a loose wheel relegated him back to fifth. Putting it all on the final in the main event, Rudolph worked his way into the lead by lap eight and built a solid lead over the rest of the field by the halfway point. Not looking back from there, the PSL Atlantic pilot cruised to a two second victory to secure back-to-back US DD2 Masters National Championship titles.

Fellow DD2 Masters competitor Rene Martinelli made it two PSL branded drivers on the championship podium. Never falling outside the top-three, Martinelli’s effort earned him a repeat invite to the RMCGF. Clocking third in qualifying, the multi-time Team USA member posted second, third and second in the three heats to line up with his teammate on the front row for the prefinal. Making a last lap pass to take the prefinal win and secure pole for the final, Martinelli was well on his way to his fourth Team USA invite. Coming home third in the final to stand on the championship podium, Martinelli came up short of the title but will be on track in New Orleans this November to take on the world.

“Rudolph and Martinelli displayed strong pace from day one, with constant progression in the week,” Campbell continued. “It was going to be a real coin toss as to who would win the final, and I am proud to say both pilots represented CRG very well.”

Taking on a huge field of 36 Mini Max competitors, three Team PSL Karting drivers would look to make their mark in the ultra-competitive class. Leading the way in qualifying was Joshua Sirgany, who clocked seventh overall to start the three heats in row four. David Rafailov posted tenth, with rising talent Parker Chase back in 24th. Sirgany again led the way through the heats, with consistent results of two eighths and one seventh putting him once again seventh on the grid for the prefinal. Rafailov posted three results in the top-15, and scored fastest race lap in heat three to start the prefinal 13th while Chase’s efforts put him 22nd on the grid. 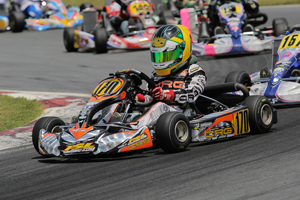 With Sirgany mixing it up at the front of the field the entire event, the prefinal saw the Jamaican pilot secure a front row starting position for the all-important final. Disaster would strike for Rafailov, who went out of the race on lap three and was classified a disappointing 32nd. Chase would move up nicely, powering through the field to finish 13th. In the final, Sirgany would go on to pace the field to the green flag with the polesitter, only to be shuffled back early while battling for position. Sirgany would finish his run with a respectable seventh place result, while Chase would make it two PSL pilots in the top-ten after a commendable drive found him ninth in the final. Rafailov would eventually finish 24th, with the prefinal debacle dashing his title hopes.

“Our Mini Max JVD/PSL engine program is working quite well. It has definitely been an improvement internally having JVD work with us in house, in our own shop to build proper engines. In addition to our motor program, we really have the best chassis and on the grid. Chase, Sirgany and Rafailov were amongst the quickest all week. If it was not for some on-track racing incidents, the final results for Chase and Rafailov could have been very different. Nonetheless, the boys were able to put on a great performance.”

Rotax Junior competitor Gavin Reichelt also had his title hopes come crashing down, as the promising young driver had a week to forget. Struggles in qualifying resulted in mixed heat race finishes, which ultimately led Reichelt to the last chance qualifier where he went out on the first lap. Forced to watch the remainder of the event from the sidelines, Reichelt will no doubt look to rebound at the remaining events on his 2013 racing calendar. 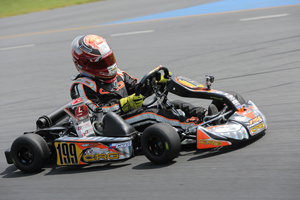 Parker Chase moved up through the field and also scored a top-ten result in the Mini Max final
(Photo credit: Ken Johnson – Studio52.us)

Team PSL Karting will return to US Rotax racing at the Pan American Challenge October 8-13 at the NOLA Motorsports Park in New Orleans, Louisiana in the hopes of adding additional drivers to compete at the RMCGF. The team will also contest the remainder of the Eastern Canadian Karting Championship and the Canadian Karting Championships north of the border, where Team Canada invites are on the line as well.