CADDO MILLS, TEXAS (August 9, 2013) – Among the rising karting teams in the United States is the Dallas Karting Complex operation, partnering up with the Sodi Kart brand. The French-manufactured chassis is steadily growing, thanks to the efforts of the DKC team. Recently, the program traveled the GoPro Motorplex in Mooresville, North Carolina to compete at the prestigious United States Rotax Max Challenge Grand Nationals, where they would support 17 drivers. Many under the tent during the July 30-August 3 event were challenging for the national title, and tickets to the Rotax Grand Finals that will be held at the NOLA Motorsports Park in New Orleans in November. The east Texas team showed the efforts of their growing Rotax program represented very well against the nation’s best.

In attendance with the Dallas Karting Complex was Sodi Kart factory team principal Nicola Decola along with a number of mechanics from the French manufacturer, helping to guide the team’s Sodi Kart drivers through the challenge week event. Through their combined efforts and hard work, the DKC team would help team owner Mike Jones and DD2 racer Sean Owens punch their tickets to head the ‘Olympics of Karting’ in four months to represent Team USA in the Rotax Grand Finals. 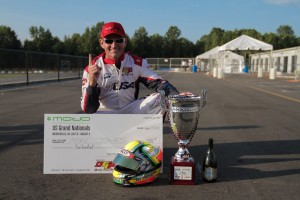 The DKC team was very well represented in the DD2 and DD2 Masters categories. Of the 17 total karts, seven of them were racing out of the DKC tent. In DD2 Masters, DKC owner Mike Jones led the way for his team the whole week. Jones put his Sodi Kart fourth on the DD2 Masters grid. Through the three heat races, Jones remained in the top-five, keeping himself in the hunt while finding more speed with every session. A third place finish in the Prefinal set up for a solid start to the Final on Championship Saturday. Jones, competing for a second straight trip to the Rotax Grand Finals as a member of Team USA wasted no time in the final. Jones got a great start that vaulted him into the lead for the first six laps. Jones would relinquish the lead to the defending national champion, and stayed close to make it a stellar drive to the runner-up position and a ticket to the Rotax Grand Finals.

Racing with Jones in the DD2 Masters class were DKC drivers Lance Lehrman and Conrad Park. Both drivers had up and down weekends. Lehrman drove his Sodi Kart as high as seventh several times on the results sheet, and finished the event in the same position. Park, a sportsman racer, enjoyed another Rotax Grand Nationals as he has become a regular fixture in the DD2 category. On the final checkered flag, he would record the eighth place finish to end his week in North Carolina. 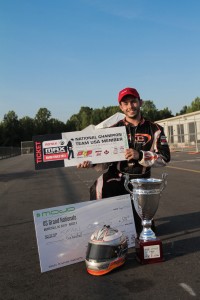 Sean Owens earned the second spot on the DD2 podium, and will compete at the Rotax Grand Finals in November (Photo: Ken Johnson – Studio52.us)

While DD2 Masters was being handled by Jones, the DD2 class would see a great run out the Dallas Karting Complex drivers who spent the entire event battling for podium positions. When the final checkered flag waved, it was Sean Owens earning the runner-up position. Owens, along with DKC teammates Michael Ilavia, Alex Tartaglia and CJ Cramm fought from qualifying to the last lap of the Final. Owens improved each session out to exhibit superb race craft as he drove to secure a solid front row starting spot for the main. After early jostling for position early on, Ilavia Owens, and Tartaglia ran second, third and fourth on-track – all in position for podium finishes. Ilavia would hold on to the runner-up spot to the checkered flag, unfortunately, his engine would not pass the squish test in post-race inspection, and thus was removed from the results. This propelled Owens to the second position and a ticket to the Rotax Grand Finals alongside Jones. Tartaglia would retire early while contact on the opening lap put Cramm on the sidelines and out of the race.

In the Rotax Masters class, DKC fielded Texas driver Dean Boyd. After qualifying 19th, Boyd made great improvements through the heat races. A stellar drive to 12th place finish in the first heat race, he backed it up with a nine spot advancement to 10th. He backed it up in the third with another drive to 10th place, landing him ninth on the Prefinal grid. Saturday morning in the Prefinal, Boyd gained two spots in the 14-lap event to start from outside row four in the main event. Through the 20-lap Final, Boyd would remain inside the top half of the order and eventually be classified ninth. 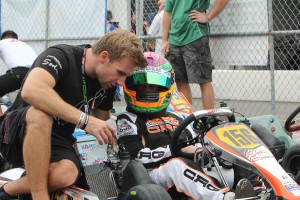 In Mini Max, DKC saw its largest field of karts – five total –led by new recruit Horatio Fitz-Simon. In a stacked field of 36 youngsters, Fitz-Simon qualified 12th quickest on Thursday. From there, the heat races started with a DNF in the opening race and then running as high as 10th in heat two, he dropped 10 spots to 20th. Never throwing in the towel and forming a solid relationship while working with IndyCar driver Jay Howard, Fitz-Simon could not be held down for long though as he drove to a ninth place finish in the third heat. Horatio started 16th place in the Prefinal Saturday morning, and finished one spot back. The Final however showed the talent he possessed as he advanced through the field to end up eighth in his first outing with the DKC/Sodi Kart operation. The next highest finisher out of the DKC stable in Mini Max was Matthew Stretch in the 25th position. Lawson Nagel came home two spots farther back in 27th, while Alejandro Jaramillo and Collin Owens were involved in opening lap incidents that would sideline them during the race.

One of the sparks during the weekend was the progression of new DKC/Sodi Kart recruit Evan Mehan. Working alongside driver coach/mechanic Louie Pagano, Mehan improved with every session on track. Qualifying seventh overall, and missing the new Super Pole session by just one position, Mehan drove to top five results in the heat races, including a runner-up finish. Starting seventh, Mehan was an early challenger in the Prefinal until he was shuffled back to 10th. Unfortunately, the young driver ran into bad luck and retired early from the main event. 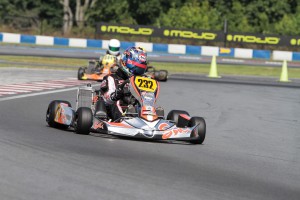 A pair of 21st place finishes was earned by DKC drivers David Ilavia and Chaz Nagel as Ilavia contested the Junior Max category and Nagel in the Senior Max division. The Micro Max class featured the youngest racers of the weekend and Logan Stretch was the one driver from DKC/Sodi Kart stable. After failing to get out for a single lap of qualifying on Thursday, Stretch spent the whole weekend climbing. Each of the three heat races Stretch climbed up the leaderboard, but a mechanical issue put him on the sidelines in the Micro Max final.

The Dallas Karting Complex/Sodi Kart team will next travel to the Oklahoma Motorsports Complex as the Texas ProKart Challenge continues with its 2013 season, hosting rounds seven and eight on the August 16-18 weekend. To find out more about Arrive-and-Drive opportunities in Norman, Oklahoma, or other events remaining in the season, visit them at www.dallaskartingcomplex.com or contact Kevin Adds at 214-458-1500.

Karting is an emerging sport in the North Texas area, and Dallas Karting Complex is leading the way in building awareness and enthusiasm by providing the newest start of the art karting track in Texas. Built in 2010, the facility in Caddo Mills, Texas welcomes thousandths from the metro Dallas area and the entire Lone Star State to experience the rarest form of motorsports. The operation also fields a growing national race team with its working relationship with the Sodi Kart factory in France. The Dallas Karting Complex/Sodi Kart team follows the Texas ProKart Challenge, United States Rotax Max Challenge and the Superkarts! USA Pro Tour in 2013. If you are looking for that competitive edge, look no further than DKC and Sodi Kart.