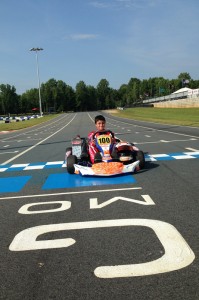 Doral, Florida – August 8, 2013 – Looking forward to the Rotax Max Challenge United States Grand Nationals, Floridian driver Michael Benyahia had his sights set on a podium result. Showing speed at the annual GoPro Summer Shootout three weeks prior to the Grand Nationals, hopes were high entering the prestigious event on the chances to secure a national championship as well as ticket to the Rotax Max Challenge Micro & Mini Invitational later this year. Traveling to the GoPro Motorplex in Mooresville, North Carolina for the week long program, Benyahia left the event with a third place result after coming from deep in the field during the final day of competition.

After posting times that would place him in the top-five in both unofficial and official timed sessions, a chassis change for the Rotax Mini Max qualifying session saw him well down the order. Turning only the 17th quickest lap of the session, the Tecno Kart pilot would start all three of his heat races from inside row nine. Looking to secure consistent results to help him improve his starting position for Championship Saturday, Benyahia would have a very tough and disappointing time.

After being taken out in the first heat race on Thursday afternoon, Benyahia rebounded Friday morning to improve seven positions to claim the tenth spot in heat two. Working towards the same or better result in heat three, Michael had the speed to move forward, but was yet again taken out of the heat by some over aggressive competitors.

“I had the speed to run at the front of the field, but the racing luck was not on my side this week,” explained Michael Benyahia after the third and final heat race. “I will be forced to start near the tail of the field for the prefinal and will just try and advance forward as many positions as possible.”

With Championship Saturday now here and perfect weather conditions greeting competitors, Benyahia was excited to get the final day of wheel-to-wheel competition started. Lining up in the 24th position on the outside of row twelve for the prefinal, advancing forward and staying out of trouble was key to ensure a shot at a podium result in the day’s main event. Slicing and dicing his way through the field during the short prefinal, the Tecno pilot was back into the groove of things and salvaged a 14th place finish.

Benyahia then was a driver on the move in the main event. Starting mid-pack and avoiding the first corner melee, the Floridian marched his way up the running order. By the sixth circuit of the main event, Benyahia would see himself in the third position as the lead duo had checked out from the rest of the field. Turning some of the fastest laps of the race, Benyahia was able to open the gap on the fourth place driver as he began to slowly catch the leaders. Hoping for an incident and a loss of momentum to catch the lead duo, no such situation would develop and Benyahia would have to settle for the third and final step on the podium.

With his podium result, Michael will now be part of Team USA at the Rotax Max Challenge Grand Finals Micro & Mini Invitational to be held in New Orleans, Louisiana in early November. Before then, the rising talent will be seen in regional completion throughout the state of Florida and is already back on track completing testing for the upcoming Rotax PanAmerican Championships.

Michael would like to thank his tuner and driver coach Jesus Rios for all of his hard work and effort throughout 2013, Ariel and Mayri Castro of AM Engines for on-track engine support, Tecno Kart Racing, Michele Zampieri, Zagar Corse, Angela Gastadello as well as all of his family and friends.

For more information on Michael Benyahia please email ben@ccmcellular.com or visit him online at www.michaelbenyahia.com.