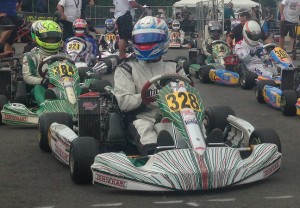 As an independent driver, AJ Myers battled some of the biggest teams in karting, narrowly missing the Super Pole and scoring a top-five result in Rotax Senior
(Photo credit: AJ Myers Racing)

After impressing all at the GoPro Summer Shootout a month ago, Floridian pilot AJ Myers would turn heads again this past weekend in Mooresville, North Carolina. Competing at the annual Rotax Max Challenge United States Grand Nationals at the same GoPro Motorplex facility as the GoPro Shootout, Myers would claim a fifth place result after sitting on the pole position for Championship Saturday’s prefinal.

“It was a great weekend for my dad and me,” explained AJ post event. “We are a father-son team and work very hard to compete in the Rotax Senior field. We narrowly missed out on the victory against some of the biggest operations in karting. Earlier in the week, I almost claimed the first ever Super Pole in the USA. Overall it was a great weekend but I am still disappointed not to be part of Team USA.”

Showing his speed right out of the gate, Myers, and his Tony Kart package, was one of the quickest drivers in pre-event testing. Continuing the speed throughout Wednesday’s official practice sessions and onwards into Thursday’s qualifying, Myers would be one of six drivers to make the first ever Super Pole session in the United States. Flexing his muscles and showing his speed, the talented pilot managed to lock up the second position and front row starting spot for each of his three heat races.

With testing and qualifying now over, it was on to wheel-to-wheel action. With three heat races taking place Thursday afternoon and throughout Friday, Myers would begin his quest for a national championship. Taking advantage of some other driver’s misfortunes as well as just plain out-racing some of them, the Rotax driver was able to secure two heat race victories and add a second place result to have the least amount of points of any of his counterparts. With the impressive set of finishes, Myers would start Championship Saturday on the inside of the front row, as he would pace the field to the green flag.

Myers continued, “The results leading up to Saturday are a true testament to how hard my dad and I work. We don’t have an unlimited budget, we pit alone and don’t receive much help, so we have to rely on ourselves to find the optimal set up, yet we are still able to run at the front of the field.

Though Myers would lead the field to the green, he was unable to hold the point throughout the prefinal. Falling back slightly but able to work his way back forward again, Myers would end the prefinal in the fourth position. Unhappy with the result, Myers and his dad would go to work and look to improve his Tony Kart Rotax package for the main event.

With the Rotax Senior national championship on the line and invitations to be part of Team USA, Myers would work hard to claim a podium result. With a magnitude of changes made after the prefinal, some would help and some would hurt Myers in his run for the title as he would eventually finishing the day in the fifth position.

For more information and sponsorship opportunities on AJ Myers and AJ Myers Racing, please visit them online at www.AJMyersRacing.com or contact Mike Myers at 727.647.8870 or via e-mail at mmyers2828@yahoo.com