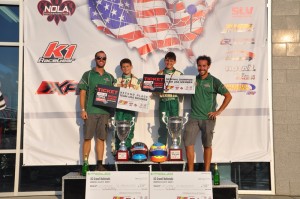 Descending on the GoPro Motorplex in Mooresville, North Carolina, Team Koene USA would enter three drivers in the annual Rotax Max Challenge United States Grand Nationals this past weekend. With all drivers running at the front of the field throughout the weeklong event, the team would garner the Rotax Mini Max Championship and Rotax Micro Max Vice-Championship and will now head to the Rotax Max Challenge Grand Finals later this year, tickets in hand for the Micro & Mini Invitational.

“It is great to achieve such success after only really starting our team in January,” explained Team Principle Mike Maurini. “We have been investing a lot of time and money into the team and the success is coming with each passing event. We are looking forward to the remainder of our 2013 schedule.”

After slightly struggling in qualifying, Rotax Mini Max pilot Michael d’Orlando would progress through the heat races in fine form to advance forward and start Championship Saturday on the inside of row three. Pushing hard throughout the prefinal and taking advantage of a late race incident, the future champion would claim the third position and preferred inside row starting position for the main event.

Falling back to fifth on the start, Michael and his Team Koene USA prepared Tony Kart began his march forward. Slotting into the second position and working with the leader to draft away from the field, Michael held station throughout the main event. Waiting for the sign from his tuner, the elder d’Orlando made his bid for the lead with two laps remaining and never looked back. Fist pumping as he crossed the finish line, Michael would be crowned National Champion in the podium celebrations later that evening.

Younger brother Nicholas d’Orlando would see action in the Rotax Micro Max division, as he would look to challenge for the win. Following in the footsteps of his older brother and progressing through the heat races, the Team Koene USA pilot would start his quest for a national title in the third position. Receiving contact mid-race in the prefinal, d’Orlando would fall back to just outside the top-ten before finish in the eighth position. Working hard in the main event to get back to the front of the field, Nicholas slotted himself in the third position by the mid-race distance. Falling back to cross the line in fourth, the Koene USA powered driver would narrowly miss a spot to the Rotax Grand Finals later this year.

However, post-race technical inspection did not go well for others as a pair of drivers would be found with illegal carburetors and ultimately removed from the final results. Nicholas would advance forward to the second position, claim the Rotax Micro Max Vice-Championship as well as earn a ticket to the Rotax Max Challenge Grand Finals later this year.

Rotax Junior driver Derek Sobel would impress all in only his second weekend under the Team Koene USA tent. After claiming the ninth position in qualifying, Sobel would have three solid heat races finishing second, second and seventh and would line up for the prefinal in the fifth position. Disaster would strike at the start of the prefinal as Sobel and a trio of other drivers would be involved in an incident in corner two and sent down the running order. Closing the first lap outside the top-30, Sobel would drive forward to finish 22nd. Despite starting the main event deep in the field, Sobel would continue to develop and learn in his Koene USA prepared Tony Kart. Advancing forward another nine positions in the main event, Sobel would end his 2013 Rotax Grand Nationals with a respectable 13th place result.

Maurini added, “All three drivers in the Team Koene USA tent did a great job. For the most part, they all qualified well and stayed out of trouble during the heat races and all started their prefinals inside the top-five. Working to teach the drivers as well as provide quality equipment is ensuring great results and we will continue to drive forward and challenge for race wins in all future events.”

Team Koene USA would like to thank Maxspeed Group for all of their hard work and dedication in bringing Rotax to the upper echelon of our sport.

Team Koene USA will have a jam-packed schedule for the remainder of the 2013 season including trips to New Orleans for the Rotax Pan American Championships, Las Vegas for the annual SuperKarts! USA SuperNationals as well as the remaining World Karting Association Manufacturers Cup events. Along with these event weekends, Team Koene USA will complete numerous test days and regional events in the coming months. Drivers looking to compete with the elite karting team are asked to contact Mike Maurini to discuss potential opportunities.

For more information on Koene USA and their online store, please visit www.KoeneUSA.com or contact company representatives at 317.270.8723 or via e-mail to Info@KoeneUSA.com