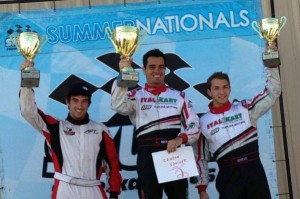 Following a successful SKUSA Springnationals in Tucson, Arizona that saw ART Grand Prix America take the national karting scene by storm, the team traveled to Grand Junction, Colorado for the Summernationals for Rounds 3&4 of the SKUSA Pro Tour. With record entries for the event, the Southern California based team also boasted a team record of 11 drivers racing under the banner and one more driver racing independently on the ART Grand Prix chassis. After months of preparation, six practice sessions on Friday would show where the team stacked up in the TAG categories before 2 separate race days in very difficult conditions.

Three drivers would line up in TAG Junior with team regulars Brenden Baker and Phillippe Denes showing good speed throughout practice. A late addition to the roster was multi-time karting champion and current championship contender in the Skip Barber and Pacific Formula F 1600 series’, Colton Herta. With all three trying multiple set up combinations, confidence was high going into the first round of action for the weekend. After a tough qualifying session, Baker once again showed his racing prowess by climbing up to the 3rd spot by the end of the heat. Denes fell back at the start, but was one of the fastest karts on track as he raced back through the field. Baker would maintain his position in the second heat as Herta started moving through the field with a 7th place finish.

With a 20 lap final on tap and with so many fast drivers in the field, it was destined to be a thrilling race. Looking to be aggressive early, Baker, the Prokart Challenge TAG Junior points leader, grabbed the lead early and began pulling away. Baker ended up settling in and finishing 7th. Denes once again found himself caught up in a first lap mess and was forced to battle back. Making smart passes, the national rookie was able to finish in 11th just outside the top 10. Herta, meanwhile, was on a tear moving through the field and eventually taking the lead. The lead was short lived, though, as some close racing lead to contact that allowed the leaders to break the draft. Herta still was able to finish 4th in a fantastic debut with the team.. Satellite driver Christian Brooks also had a great effort with a 5th place result. With some more changes for Sunday, everyone was looking forward to challenging for the podium.

Sunday qualifying would prove difficult for the team, but Denes was able to do a great job with a 6th place effort. Herta was able to bounce back in heat 1 with a 7th place finish, while Denes was knocked back on a restart and had to settle for 11th. The second heat was another difficult one with Herta leading the way with an 8th place. With big changes on tap for the main, Herta was looking very strong once again moving his way back into the top 5 and poised for a run to the podium, but ultimately finished 9th. The Junior drivers will now regroup to finish the rest of the SKUSA season on a high note.

Looking to continue what has been one of Steve Wiener’s best seasons of TAG Masters competition in a long time, Wiener came to Colorado with lots of momentum. After a solid practice day, the San Diego karting veteran would have a thrilling first heat starting at the back of the 19 kart grid and driving up to 12th and leaving everyone excited for what the rest of the day had in store. Unfortunately, two mechanical DNF’s in the opening laps of the second heat and the main soured what could have been a fantastic day. Sunday would prove to be a much better story. After a DNF in heat 1 had everyone worried that his bad luck hadn’t disappeared, Wiener drove to a 13th in heat 2 and then all the way into the top 10 with a 9th place result in the final. This was Wiener’s first top 10 in a national event in quite a while and the whole team was definitely excited to see such a competitive result. 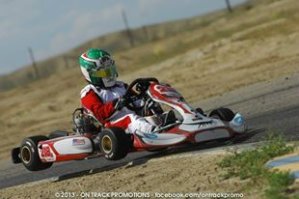 TAG Senior would be the class to watch all weekend with 42 drivers entered, and 7 of them being ART Grand Prix America entries, including Springnationals double winner Andrew Zimmer. Marco Eakins, Zimmer’s Black Flag Racing teammate, surprised the entire paddock on Friday by sitting on top of the time sheets in his first ever senior start. Moving into Saturday’s qualifying session, the seven drivers rolled onto the track in an excellent display of teamwork. Eakins, Zimmer, Jake Craig, Andrew Wiener, Juan Jimenez, Chris Cricca, and Andres “Pipe” Ceballos all looked to help each other in order to maximize any advantage possible. The strategy proved successful as four drivers ended up in the top 10 with Zimmer leading the way in 6th.. After a very rough start Zimmer was out of the heat. While the team was disappointed, Eakins and Cricca put on great drives with the fourteen year old Eakins climbing from 17th to 5th and Cricca bouncing back from the tough start to finish 9th. Eakins continued the strong driving with another 5th place in Heat 2 and Craig rebounded from the difficult first heat to move up from 25th to 11th.

The final would prove to be exciting and also difficult. Dropping back early, Eakins would stay poised and slowly start working his way back through the field with the help of teammate and Prokart Challenge points leader Craig. The two were running blistering laps and were able to both make it to the top 5 with a 4th for Craig and a 5th for Eakins. A great rebound for the California driver and an amazing senior debut for the young Oregon pilot. Jimenez would also turn in a fantastic drive all the way almost into the top 10 with an 11th for the young Colombian. Ceballos, Zimmer, and Cricca all found their way back inside the top 20 while an unfortunate first turn crash ended Wiener’s race before it started. With the issues put behind them, the team looked to make Sunday a stronger and less eventful day.

Sunday’s qualifying would see Zimmer end up 5th and Eakins 8th, putting both drivers in great position to have a strong and consistent race day. Zimmer would enjoy a great first heat moving up into 3rd while Craig bounced back from an average qualifying result to move up to 11th with good pace. The second heat would be a little tougher as Zimmer dropped back to 7th, but Craig made his way back into the top 10. Making some changes for the final, Zimmer settled in early and slowly went to work to move his way back through the field from his 7th place starting spot. Running some of the fastest laps in the race, he was able to move into 2nd and open up a comfortable margin for his 3rd podium of the season. Cricca put in a great drive to climb from 19th to 7th to conclude a very successful first national race weekend. Eakins continued to battle and finished 11th and gained a lot of valuable experience that should see him in contention at the Supernationals in Las Vegas. Andrew Wiener finally had a result worth remembering as things clicked and he drove from 29th to 13th showing great pace throughout the final. It was a very long and difficult weekend, but all of the senior drivers showed the speed to compete and battle. Attention will now turn to the SKUSA Supernationals where the team will look to capture the victory that should have been theirs last season with Charles Leclerc as well as capture the Pro Tour championship in their first full season of operation.