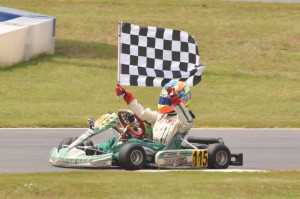 Making the switch in teams in early January and then switching to the Tony Kart brand in May, it was a year of change for d’Orlando Racing (DRC Inc.) pilots Michael and Nicholas d’Orlando. Looking to get up to speed early but understanding the learning curve of a new team and new equipment, the duo would hit their stride early and never look back. Taking victories at the annual Florida Winter Tour, World Karting Association Manufacturers Cup and GoPro Summer Shooutout, it was time to focus on the annual Rotax Max Challenge United States Grand Nationals. Competing at the GoPro Motorplex facility under the Team Koene USA banner, Rotax Mini Max driver Michael d’Orlando would claim the race win and national championship title while Rotax Micro Max competitor Nicholas d’Orlando would be crowned Vice-Champion.

“It has been a great year for the boys and this weekend’s result prove that our changes have been good ones,” expressed Sherri d’Orlando. “Our goal was to come to the event and just be in contention but at the end of the weekend, both the boys ended up on the podium and both will travel to the Rotax Micro & Mini Invitational at the Rotax Max Challenge Grand Finals later this year.”

Looking to carry the momentum gained from the GoPro Summer Shootout less than a month ago, Michael and Nicholas d’Orlando would show the speed in their respective classes in both unofficial and official testing leading up to the event. Focused and poised to challenge for Team USA tickets, both drivers were conscious of their efforts this past weekend.

“Michael and Nicholas did well this past weekend,” explained Team Koene USA’s Mike Maurini. “They are kids so we have to find different ways to make them focus. At the end of the weekend, it all ended good.”

Michael would start his quest for a Rotax Mini Max national championship with Thursday morning’s qualifying run that would see him end up on the outside of row four. Starting in the eighth position, the goal of staying out of trouble and working his way forward in the heats was instilled in his mind. With heat race results of fifth, third and a disappointing 11th, Michael would garner enough points to start Championship Saturday’s prefinal from inside row three in the fifth position.

Younger brother Nicholas would compete in the Rotax Micro Max ranks and would start his week off strong with a fourth place effort in qualifying. Looking to advance his starting position for Saturday’s prefinal and follow in the footsteps of his older brother, Nicholas would garner fourth, seventh and fourth place results in his three heat races and claim the third place starting position for Saturday’s prefinal.

Saturday morning would greet the d’Orlando’s with a perfect racetrack, as warm-up would go smooth. Unable to match the speed that they had earlier in the week, Team Koene USA was not alarmed with the lack of speed as a setup for a much warmer track was still in place on their Tony Kart chassis. Nicholas would be the first of the DRC pilots to complete his prefinal and would do so with disappointing results. Working with a trio of drivers to stay at the front of the field, Nicholas would be involved in an incident that would see him spiral down the running order. Outside the top-ten at one point, the younger of the two brothers would work his way back forward to finish eighth. 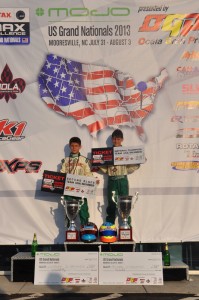 Michael and Nicholas d’Orlando will compete at the Rotax Micro & Mini Invitational at the
Rotax Grand Finals later this season
(Photo: dOrlandoRacing.com)

Rotax Mini Max would be on the track a short thirty minutes later and it was Michael’s chance to look to move his way forward. Quickly getting past a few competitors at the drop of the green flag, Michael would slot himself into third for the majority of the race. In a crazy last lap that saw multiple drivers make contact, Michael would fall from third to sixth and then back up to third before the checkered flag would fly.

With opening ceremonies and driver photos completed just before lunch, a break in the action would precede the main events. With a sense of nervousness in the air, it was all or nothing in the main event as this is what drivers had worked for all week.

Rotax Micro Max would be the first field of drivers to take the green flag as Nicholas would try and advance forward from his outside row four starting position. As one of the fastest drivers on the track, the Tony Kart pilot quickly advanced forward to the third position where he and another driver would work together to try and catch the lead duo. With laps winding down, Nicholas would lose a position and finish fourth on track. Disappointed in the result and not being part of Team USA, frowns turned to smiles when post-race technical inspection saw two drivers in front of him removed from the results for technical infractions. Nicholas would advance up the standings to the second position and be named Rotax Micro Max Vice-Champion.

Hearing the news of his brother’s finishing position while on the grid, older brother Michael d’Orlando was set to do one better in the Mini Max ranks. Starting from P3 and falling back to fifth after the opening corner, Michael quickly worked his way up to second as he and the leader would work together and draw away from the field. Waiting for the sign from his tuner, Michael finally made a bid for the lead with two laps remaining. Never looking back and winning the race to the checkers, Michael was crowned the National Champion, as he and his brother will travel to New Orleans later this year to compete in the Rotax Max Challenge Grand Finals Micro & Mini Invitational.