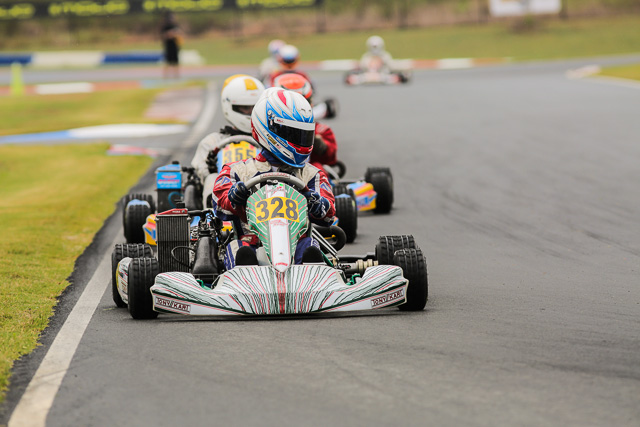 Be sure to post your comments regarding the opening day of the event below in the EKN Global Members Discussion section – Ed.

The 2013 United States Rotax Max Challenge Grand Nationals officially got underway at the GoPro Motorplex on Wednesday with a nearly full day of action. It was a battle with the weather in Mooresville, North Carolina as rain began the day and ended the day early, with the Senior Max sessions at the end of the day cancelled due to terrible track conditions and lightning nearby. For the other categories, the stage was set as to who was quick and just how many drivers will be in the battle for the pole position on Thursday.

GoPro First Class
The facility at the GoPro Motorplex is certainly first class, as Justin Marks and his entire team put in a lot of money and time to make this one of the premier facilities. The paddock is full of trailers and tents, with cars overflowing in the surrounding area that has been turned into parking for the event. The course is situated so that the entire course is in front of the paddock. Certain areas of the course have been coned off, as the extra runoff room in turns six and nine ensure no drivers are using more track then what is permitted.

Rain came down very hard at the end of the day, cancelling final Senior Max sessions

The practice day began with a wet track, as drivers contested the opening round on wet tires. With no rain falling, the track dried out really quick and most classes in round two were on dry Mojo tires. Round three was all dry for every class with rain threatening the area as round four began. Rain finally began to fall as the first group of Junior drivers took to the track. By the end of their two groups, the officials decided to cancel the Senior sessions as the rain was too heavy and lightning near by.

Top Contenders
With the final session for the Senior Max group rained out, they reverted back to Practice 3 to set up the qualifying groups tomorrow. That session was led by all Florida drivers under the Ocala Gran Prix tent. AJ Myers, making his first Senior Max start at the Grand Nationals, was the top driver on the board, leading a Tony Kart top-five. 2011 champ Nick Neri was second with three-time runner-up Sam Beasley, Jonathan Kotyk and another Senior rookie Oliver Askew making up the fast-five. Junior Max final practice saw the heavy rains that led to Senior Max being cancelled. The fast half from the first group will be merged with the fast half from the second group to make up the fast group for qualifying tomorrow. The quick driver in the wet was Carolina racer Bradley Zillsch.

DD2 was led by Sean Owens (Sodi Kart), with the top six all within a half-second. DD2 Masters saw Alan Rudolph (CRG) make his only session of the day a good one, posting fast lap in the class with Rene Martinelli (CRG) right there. The top seven in Masters Max were all within three-tenths of each other, led by KartSport North America’s Scott Falcone (Arrow). It was a Birel 1-2-3 in Mini Max as Kollin Stuart, Nick Brueckner and David Malukas finished the final session within eight-hundredths of each other. It was even closer in the Micro Max final practice as Dylan Tavella (Tony Kat), Tyler Gonzalez (AM Racing Kart) and Derek Carmenate (CRG) ended up separated by only 28 thousandths on their fast lap. 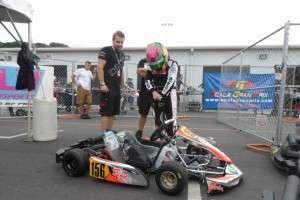 Horatio Fitz-Simon is among the new faces at the DKC/Sodi Kart operation, working with Jay Howard

At the Rotax Grand Nationals, the big teams fill the paddock with the large haulers and multiple drivers under the tent. One operation building their program is Dallas Karting Complex-Sodi Kart. The race team – co-owned by Mike Jones and Kevin Adds – is working directly with the factory in France, bringing Team Principal Nicola Decola along with two mechanics to assist the 15 total US drivers. Top drivers Louie Pagano and Jay Howard were scheduled to compete under the tent, but issues with the four-punch minimum to qualify for the Grand Nationals. They did however recruit new drivers aboard the Sodi Kart – Senior driver Evan Mehan, Junior driver Cole Glasson, and Mini Max pilot Horatio Fitz-Simon.

New Toy for GoPro
Kevin Adds from DKC brought a new video toy, called the DJI Phantom. The flying gadget is a remote-control flying object that holds a GoPro camera, capturing footage from high above. During one of his runs, he forgot to turn on the GPS return when he took off, but rather while it was in flight. As the device flew far away, he lost control and it went off into the distance. It returned somewhere west of the facility in the woods, and despite his best efforts, they were unable to recover. However, the device is something worth looking into for some fun. 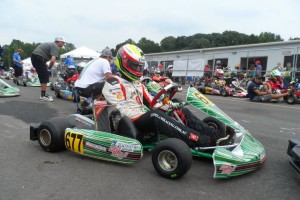 ‘Mad Max’ taking on the Masters field this week

The Mooresville area is part of Race City USA, with a number of motorsport operations based in the area, including a large majority of the NASCAR community. They are well represented in the field here this weekend. NASCAR and motorsports driver Max Papis is competing in the Masters category. In Grand Nationals past, Papis fielded a team of his own, this time around however he’s got the driver’s helmet on at what is now his home track. Juan Pablo Montoya was a star in karting before moving up the motorsports ranks, but the former Formula One and current NASCAR driver is playing kart dad. His son Sebastian is competing in the Micro Max division aboard the familiar Birel brand. Roaming the paddock this weekend was his NASCAR teammate Jamie McMurray,  visiting on the day as he is a fanatic karting fan, competing numerous events during his time off from the day job.

No Punch, No Go
Along with Pagano and Howard, a number of drivers were left at home unable to secure enough ‘punches’ to qualify. Fritz Leesmann was left off the driver roster, but already has secured a spot at the Rotax Grand Finals through his championship at the Rotax Challenge of the Americas this winter. Jesus Rios Jr. is another notable name that is not competing this year, along with a host of others who did not secure enough punches to qualifying for the Grand Nationals. The concept of the ‘punches’ is to force drivers to compete at their local United States Rotax Max Challenge program, prior to racing the Grand Nationals. 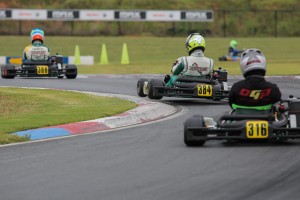 The battle for the optimal set-up continued Wednesday for mechanics and drivers (Photo: Ken Johnson – Studio52.us)

We thought it would be an interesting addition to this EKNPaddockPass to chat with the tuners to determine what the track was asking for in terms of the approach to chassis set-up.  Grip or no grip?  Overstuck, loose or greasy?  Big hubs and lots of caster, or a softer, less aggressive set-up?  What are the drivers asking for?  Increased entry grip or more forward bite off the corners?  Or maybe just a looser kart all around?  Like you, we expected some pretty straight-up answers.  What we got was far from it.  It actually appears that most of the Senior drivers are already dealing with high-grip situations.  The tire used in these classes provide loads of stick, and with so many laps being turned through unofficial practice on Monday and Tuesday, most mechanics are already battling to ‘free up’ their drivers’ karts to deal with tons of grip.  This track has a good deal of rubber laid down, and the grip is there.

That said, in contrast, we talked to a couple of the tuners of the smaller drivers in Micro and Mini Max, and some told us that with the harder Mojo D1 tires used in these classes, they are still working to dial ‘bite’ into the karts, some even implementing the use of seat struts to direct more load onto the rear tires during initial turn-in.  Funny though, as this was a cool editorial approach before the ‘monsoon’ hit this afternoon, which most likely washed off a certain level of rubber.  Some agree that the track will be noticeably more free in the morning, although others were adamant that the asphalt here in Mooresville maintained its tackiness after today’s early rains.  The bottom line is this….how cool is that that we’re on a new track and no one really knows how it’s going to react to hard rain, lots of racing and over 200 drivers beating on it for six days.  Like a wise kart shop owner told us yesterday, this week is “like a pyramid….you just keep building until you get to the top”.  Saturday is the top, and right now, we’re just in the early stages of the base.  Just because you’re fast now, it doesn’t mean that you’ll be fast on Saturday…nor does it mean that you’ll find yourself at the ‘top’ when they dole out the hardware, and the Rotax Grand Finals Team USA tickets.

Be sure to post your comments regarding the opening day of the event below in the EKN Global Members Discussion section: