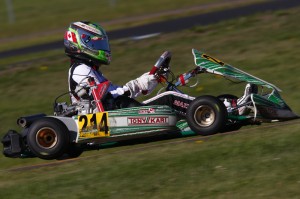 Gianfranco Mazzaferro, a member of the Ferrolati Corse Karting Team, has been logging loads of air miles as he criss crosses the globe looking to take on the best Rotax Junior Max drivers in the world. On the heals of double podiums at Goodwood Kartways in the most recent Eastern Canadian Karting Championship (ECKC) event, Mazzaferro and tuner Nick Cosco headed to England for the Rotax Euro Max held at PF International. Home for only one day, GF quickly headed west to Edmonton, AB to take in the newly recast Western Canadian Championship (WCC) at Warburg Kart Track. This weekend GF heads back to ECKC action as he takes on challenging temporary street race at the Monaco of Trois Rivieres.

“The last few weeks have been incredible,” smiles Mazzaferro. “We have been racing at some great tracks and took on some incredible competition. The results have been up and down but overall we are developing the areas we need to work on. I keep learning and raising my game which is really what this season is all about.”

With little time to celebrate at Goodwood, GF headed back over seas to take in his second event in the famed Rotax Euro Max Challenge that took place in Northern England at the stunning PF International Karting Center. GF was on pace early and maintained that form through out the weekend. Getting through the challenging heat races was priority one and the duo were able to qualify directly into the prefinal. After the heats, GF would be ranked 21st in the 45 kart field. A strong run in the prefinal saw GF work through the early contact to take 22nd place. The final was another tough affair as contact throughout the event had officials in fits. Needing to rebound several times during the race, GF complete all the laps and crossed in a solid 23rd place.

“The track at PF International is amazing,” states Mazzaferro. “The racing was good but the amount of contact in the final was crazy. It was hard to mover forward when you were getting smashed from behind. It was elbows up racing for sure.”

GF had just a day to regroup upon returning home to Montreal before he flew west to take in WCC action at the Warburg Kart Track. With a pass on the line for Team Canada the rookie Junior Rotax racer was focused on securing the championship title. A difficult run in qualifying had GF taking 11th spot in the timed session. He would go 10th in the opening heat and suffer a DNF in the second heat race. Rains came in the third heat and GF would cross the line in 6th from starting 11th. The prefinal saw GF take fifth for an inside row three start for the final. In the final contact early on moved GF back to 10th. He then battled back to take fifth at the line for a solid top five result on the weekend.

“The WCC was good in the end,” commented GF. “We were a little slow getting up to speed on the track. I think some of the travel caught us off guard. I finally got a handle on the track and raced forward in the final, but it was a little too late.”

With no time to rest, GF will rejoin the Ferrolati Corse Karting Team as they return to ECKC action this time at the temporary street course of the Monaco of Trois Rivieres. Action gets underway on Thursday with racing through out the weekend.