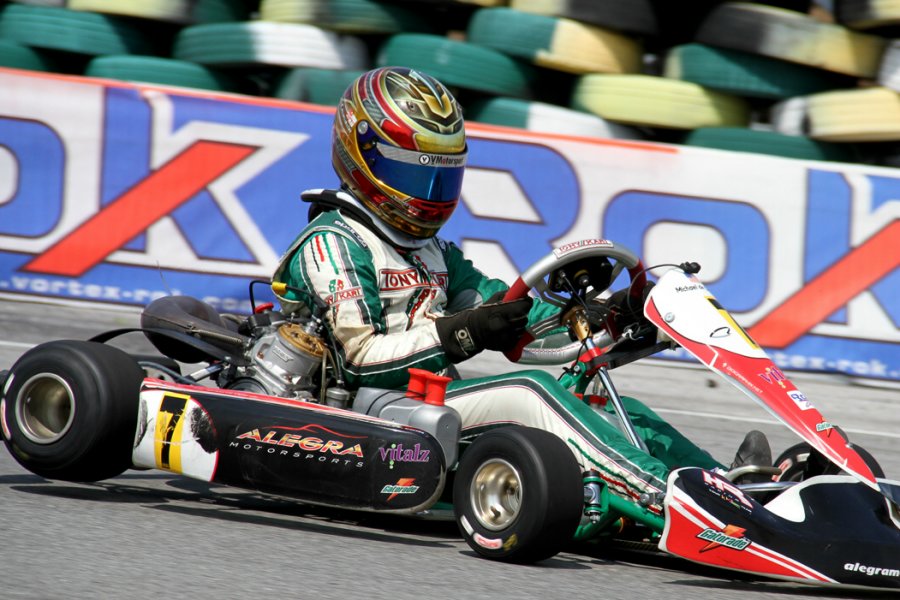 OrlandoKartCenter hosting of the third and final round of the Rok Cup USA Orlando Kart Center Region this past weekend solidified Championships in all categories, and provided surprises and exciting on-track action.  With another addition of the new Rok Shifter program, crowning of Regional Champions and perfect weather, the weekend went off with huge successes for all involved.

Named as the best value in Karting, entrants enjoyed free Rok motor rental, 3-gallons of mixed gas, a set of MG Tires, and entry into the double-final weekend, all for the low price if $210, Rokkers, new and current arrived to find out what all the excitement and buzz is about with Rok Cup USA program. 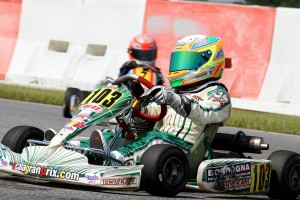 Heading into Round 3, Mathias Ramirez only needed to win the first day to seal his Championship in the Region.  Although Ramirez was strong throughout day, he would be challenged by Arias Deukmedjian and Zachery Hollingshead, making him have to work for his Championship effort.  The three ran nose-to-tail throughout the Final, with Ramirez taking the win, by only 0.257 seconds over Deukmedjian, and Hollingshead third.  Having to travel to another racing commitment, and securing the Championship with his Saturday Final win, Ramirez was absent from competition Sunday, leaving the day up to any of the other Mini Rokkers. Even with Qualifying, it was obvious the Mini Rokkers would put on a show, as Duekmedjian took the Pole but by only 0.070 seconds over Eduardo Barrichello, with Hollingshead third. Leading the Pre-Final, Deukmedjian fell to the tail of the field after a spin in the esses, allowing Hollinshead and Ruker to take the top two spots in the Pre-Final.  Starting from the tail of the field in Sunday’s Final, Deukmedjian worked his way up to third, while Hollingshead dominated the Final to take the win, followed by Matthew Ruker.  After review however, Officials assessed a two-position penalty on Duekmedjian for contact, advancing Barrichello to the third step of the podium.

Points Leader Michael DeQuesada showed his intentions to seal up the Regional Championship with a solid win in both Saturday’s Prer-Final and Final, with William Myers and Sasha Brun-Wibaux chasing him all the way to the podium respectively.  The following day, however, DeQuesada’s challengers would find the speed to challenge him for the top spot, as right out of the shoot, Myers took the Pole Position in Qualifying by a tenth, with DeQuesada second and Collin Schmitt coming in third.  The three would maintain their positions in the Heat Race.  Myers seemed to dominate the day by taking the Pre-Final as well, but in the Final, when it really counts, DeQuesada showed his intentions to secure the Championship by taking a dominating win, with Jonathan Law and Mathew Shane rounding out the podium.  Myers suffered a mechanical, forcing an early retirement.  With the double-win weekend, DeQuesada took the Rok Junior Orlando Region Championship. 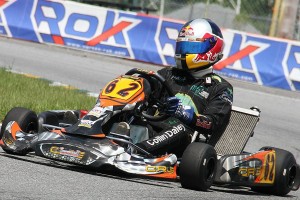 Local Rokker, Eddie Rodriguez arrived at Orlando with a minor Points Lead in the Regional Chase, but was met with a challenge by Homestead Region regulars Collin Daley and Fraser McConnell, and new Rokker Corey Towles, forcing Rodriguez to produce top finishes to ensure his title in the Region.  In a heavily populated CRG field, Rodriguez included, Daley would prove the driver to beat all weekend in the Senior Category, dominating the top spot in every element.  Towles and Mcconnell fell second and third to Daley, respectively on Saturday, with Rodriguez holding his points lead with his fourth place finish.  Rodriguez played it smart on Sunday, and maintained his grasp on the points on Sunday, keeping within striking distance of the top three battle of Daley, McConnell, and Towles.  In Sunday’s Final, however, Towles would retire early with mechanical issues, allowing Rodriguez to put a cap on his championship by coming home third.  Sunday’s win went to Daley, with McConnell second and Rodriguez third.

Another CRG dominated the weekend in Master, as Gonzalo Aparte took the win in both Finals Saturday and Sunday, but the runner-up honors all weekend went to Thomas Hankinson.  With his second place finishes, Hankinson secured his Rok Master Orlando Region Championship.

In only the third running of the new Rok Shifter Category, excitement continued to grow with this new class, bringing out new Rokkers to try out the Rok Shifter package.  One surprise of the weekend was the absence of Points Leader Nick Neri, who out of state with other racing commitments, leaving runner-up Vicki Brian to try to secure enough points on the weekend.  Long-time karters Andre Martins and Rubens Barrichello would bring their game to the Rok Shifter Category to spoil the points, yielding wins both days.  Regular Rokker Christian Bartz contributing to the points spoils by bringing home runner-up honors Sunday.  With all the shuffling, Neri maintained his Points Championship in the first ever Rok Shifter Regional Series, with Brian securing second.

Rok Cup USA now focuses its efforts to the first ever Rok Cup USA Championship Event, August 17-18 at the Orlando Kart Center, where winners of each category will receive a fully-funded entry into the Rok Cup International Final this October at South Garda, Italy.  For more information or to enter online, visit www.RokCupUSA.com or email USA@RokCup.com

The ROK Cup is an internationally successful program, offering consistent rules packages accepted around the globe.  Utilizing Vortex-ROK equipment that has promoted parody throughout the program for over 10-years, ROK Cup is an FIA Authorized International Series, operating in 26-countries, yielding 300-drivers for the 2012 ROK Cup International Final, which is traditionally held each year at South Garda.  For more information about ROK Cup, please visit www.rokcup.com  or email usa@rokcup.com