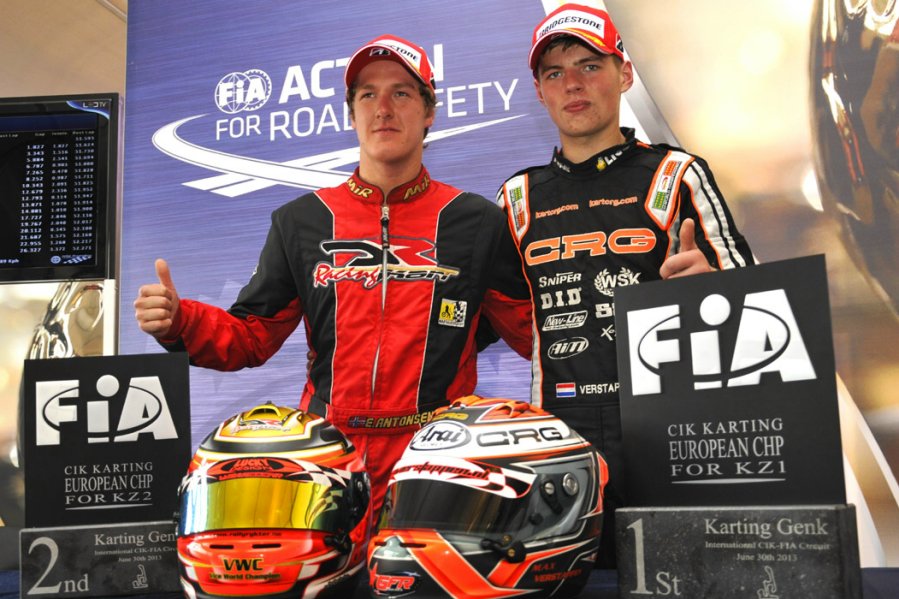 The first part of the CIK-FIA season ended in Ortona (Italy) last week. The four categories of international karting crowned their champions. The KF and KFJ titles were awarded in the Italian round, which followed the mid-June round in Alcaniz (Spain). Three weeks ago, in Genk (Belgium), the winners of the KZ and KZ2 categories were crowned after the opening event of Wackersdorf (Germany) in May. International karting celebrates its new champions, the first ones of a new era which welcomed WSK, the new promoter of the CIK-FIA World and European Championships. So, 2013 season has enjoyed a new promotional philosophy which aims at causing a stir around the world of karting.

Verstappen hauls himself to the top in the KF Championship

The conclusion of the KF European Championship in Ortona was as thrilling as ever, especially during the last laps of the Final. The close combat between the Dutch Max Verstappen (CRG-TM-Vega) and the Polish Karol Basz (Tony Kart-Vortex-Vega), substituted the supremacy of Nicklas Nielsen (Kosmic-Vortex-Vega) in the previous round in Alcaniz. In Italy, the Danish was out of the game after a contact in the first phases. On the other hand, Verstappen seized the moment and got the most out of his performance and of the troubles encountered by his rivals in Ortona. He couldn’t fend off the attacks of the French Valentin Moineault (Art GP-TM-Vega), who surprisingly beat the Dutch and the Polish in the Final. However, the CRG driver only needed a second place to lay his hands on the Championship, given that he was aware that Basz, his only rival in the race for the title, was in trouble and had to surrender to the attacks of the Italian Felice Tiene (CRG-Parilla-Vega) and the English Jordon Lennox-Lamb (CRG-BMB-Vega). Also the Danish Christian Sorensen (Tony Kart-Vortex-Vega) was not as brilliant as in Spain: In Ortona, he only managed to achieve a seventh place behind the French Armand Convers (Kosmic-Vortex-Vega), after the second place he got in Alcaniz. So, the Championship sees behind the winner – an excellent Verstappen – an outstanding  Moineault, who grabbed the second place after his terrific win in Italy. Third place for Sorensen, who at least managed to get onto the Championship’s third step of the podium.

Apparently, it was easier to win the KZ title for Max Verstappen (CRG-TM-Bridgestone): if we have a look at the final standings, in fact, we see how the Dutch won all the rounds. The CIK-FIA European Championship was the opening event of the season in Wackersdorf on 19th May. Here Verstappen had to deal with his fellow countryman Bas Lammers (Intrepid-TM-Bridgestone), the only other driver who, at the beginning of the Championship, was able to  compete for the leadership. In Genk, on 30th June, Verstappen’s rivals were no match for the Dutch driver: he won both the race and the Championship. Behind him Lammers and the Belgian Jonathan Thonon (CRG-Maxter-Bridgestone) placed second in the two rounds. They managed to get a good result only in one of the races and, in fact, they eventually placed fourth and fifth in the Championship, leaving the top positions to drivers with a more consistent pace. Marco Ardigò (Tony Kart-Vortex-Bridgestone) was one of these drivers: he was the runner-up of the Championship thanks to the podium achieved in Wackersdorf behind Thonon and to the fifth place he clinched in Belgium. Also the French Anthony Abbasse (Sodi-TM-Bridgestone) put in a positive performance. He immediately showed to be very competitive and everybody expected good results from the French driver. In fact, thanks to two placings in the first six position, the third place in the championship is his.

Antonsen is the king of Europe in KZ2

Emil Antonsen (DR-TM-Bridgestone) from Norway in KZ2 chose the best moment in the Final of Genk to gain the second position he needed to win the Championship. His team DR had already lost one of its top drivers: the Italian Riccardo Negro had to pull over just few moments after the start of Pre-final 1. A real shame for Negro who arrived in Belgium as the leader of the Championship thanks to his victory in Wackersdorf. His main rival, Marco Zanchetta (Maranello-TM-Bridgestone), was very unlucky too: he was pushed away from the battle for the leadership after a contact in Prefinal 1. So, in the Final of Genk, it was the Swedish Joel Johansson (Energy-TM-Bridgestone) the favourite for the victory in the Championship. He kept the leadership of the Final until half race. Then he got overtaken by the Italia Felice Tiene (CRG-TM-Bridgestone), who was obliged to start the weekend from the last position because of an electrical problem. The fact that in the Final of Genk he managed to pass all the other drivers and win the race says it all: without the crash of Wackersdorf  he could have had the chance to run for the European title. Johansson, then, was overtaken also by Antonsen who became the runner-up of the Final. This result allowed the Norwegian driver to grab the title, just a point ahead of the Swedish. Tiene was third: he  scored as many points as Negro but in Wackersdorf the CRG driver had achieved a better result.

Norris, from zero to hero in KFJ 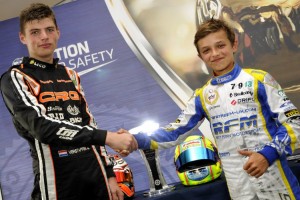 The English Lando Norris (FA Kart-Vortex-Le Cont) saw the Championship slipping off his hands when he found himself stuck in the last positions because of a contact in the KFJ Final in Ortona. Since the start, he had no chance to defend the leadership gained thanks to his victory in Alcaniz. His plans to control the race and get the most from his victory in Spain were immediately foiled. Fortunately, his most dangerous rivals did not get any top position placings in the Final of Ortona. Only the Dutch Martijn Van Leeuwen (Zanardi-TM-Le Cont) battled for the first positions but then dropped back to sixth. The same can be said for the Russian Robert Shwartzman (Tony Kart-TM-Le Cont), who placed fifth: he needed at least a third place to win the Championship. On the other hand, the race of Daniel Ticktum (FA Kart-Vortex-Le Cont) was simply brilliant. He dominated since qualifying and his final victory brought him on top of the standings with 25 points and a victory, the same score of Norris. The title was awarded to Norris because in the second round he placed 25th, while his rival did not manage to enter the Final in Alcaniz. This thrilling finale was made even more uncertain by the fact that also Van Leeuwen scored 25 points after the two rounds, but having no victories he was eventually classified third.

Media coverage of the events mainly on video

Also in Ortona, WSK Promotion guaranteed the video coverage of the event: fans were able to see the races from all around the world on the two dedicated websites www.cikfiachampionship.com  and www.cikfia.tv, which broadcast live in streaming the whole event on Sunday. The usual pre-recorded broadcast of the races on Rai Sport 2 were on schedule for the next week: last Tuesday were broadcast the KF and KFJ Finals and the Final of the

CIK-FIAAcademy Trophy. Always on the same network, on Fridays, the recap of the whole weekend closed the media coverage offered by WSK. This ‘communication pack’ is one of the winning characteristics of WSK Promotion and gives worldwide visibility to the all the CIK-FIA Championships.