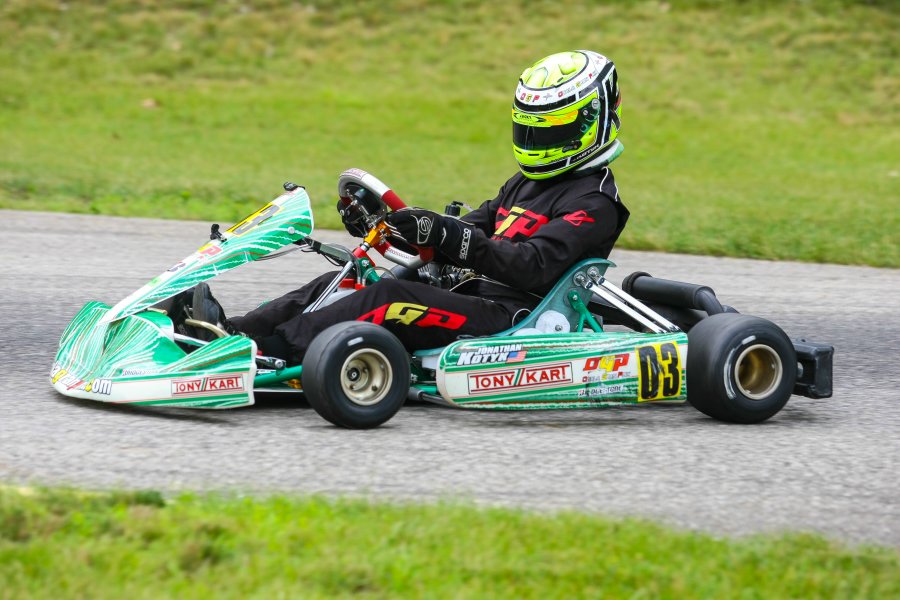 For many years now, the WKA Eagle has been a coveted trophy to secure for the mantel at home or in the garage. Drivers spend years attempting to earn one, with no success. So to leave the WKA Manufacturers Cup Series Grand Nationals with an Eagle is an accomplishment. What if left the event with four? That’s the accomplishment Florida driver Jonathan Kotyk achieved at this year’s event, held at the JET Karting facility in South Bend, Indiana, earning him the node for EKN Driver of the Month for June. 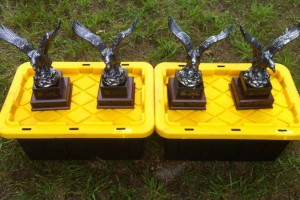 Two of his Eagles came in the Komet Pro division. During Saturday’s action, Kotyk was runner-up in qualifying, missing out on the pole position by 82 thousandths of a second. The margin was even closer after the 10 laps of the Prefinal, as pole-sitter Patrick Olsen edged out Kotyk for the race win. Jonathan found himself running second as the 18-lap main event began, but before the halfway mark, he took over the lead. From there, Kotyk laid down the quickest laps of the race to extend his lead out to just over two seconds by the checkered flag for the victory. The following day brought some wet conditions to start out the day, with Kotyk missing out on the perfect set-up and finished the session in third. He was at the front of the field by the end of the Prefinal, pulling out to a 1.2-second advantage on a dry track. The feature was a wire-to-wire victory, his third of the season and put him out in the championship lead. For his two victories, Kotyk took home $300 along with the WKA Eagles.

The two other big wins came via the TaG Senior category. The weekend began with a fourth place effort in Saturday qualifying, behind three winners on the season. Shuffled back at the start of the Prefinal, he survived to finish the race in sixth. Jonathan took the green and jumped forward early, learning from the Prefinal start. Up to third by the end of the first lap, he moved into the lead on the second circuit. From there he was able to establish a solid lead with the rest of the lead pack fighting for second. At the checkered flag, Kotyk took his first WKA TaG victory of the season.

The following day, he matched his qualifying effort with another fourth quickest lap of the session, this time in wet conditions. Holding his spot through the start of the Prefinal, Kotyk looked to be starting the main event from outside row two, until three drivers were able to slip by for position. He would end up placing seventh, but earn an inside starting spot for the feature. The inside line proved to be better for the opening lap of the 18-lap event, as Kotyk jumped to third behind former Triple Crown winners Mike Giessen and Mason Chelootz. They ran nose to tail for nearly every circuit of the 18-lap event, until the final few corners. Chelootz tried a pass on Giessen for the lead in turn nine. Contact was made and both karts went wide. This gave Kotyk a clear path to the lead and the checkered flag.

The rest of 2013 will see Kotyk try to claim the two championships in WKA Manufacturers Cup Series that he currently leads (Komet Pro and TaG), along with competing next weekend at the United States Rotax Max Challenge Grand Nationals in Mooresville, NC in addition to the Florida Karting Championship Series and the Ocala Gran Prix local programs. 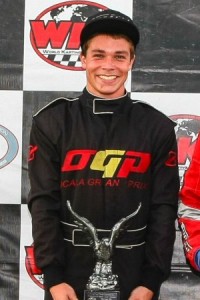 Chassis: Tony Kart EVK
Engine/Engine Builder: Rotax and Stock Honda (Ocala Gran Prix), Komet (Comet Kart Sales), Leopard (P1 Engines)
Sponsors: Ocala Gran Prix
Series You Compete In: Florida Winter Tour, WKA Manufactures Cup, Florida Karting Championship Series, North Florida Rotax Max Challenge, Ocala Gran Prix Local Series
Years Karting: 4
How did you get started in karting? My dad took me to a kart track one day and I was hooked from there
What has been the high point in your racing career? Sweeping TaG and Komet Pro at the WKA Grand Nationals in South Bend, IN
What are your goals in racing? I want to continue performing well in karting and hopefully one day make racing a career.
In a few words, how would you describe your driving style? Smooth and Calculating
Funniest moment at the race track?  Hangin’ with the guys from OGP.

What do you do when not at the track? Hang out with friends, swim, and workout
What are your goals outside of karting? Get a degree in marketing
What type of street car do you drive? 1996 Jeep Grand Cherokee
What type of street car would you like to drive? Pagani Zonda Revolucion
What are your pet peeves or things that irritate you? Zip ties that are not clipped
What do you think could be done to improve the sport of karting? More publicity and televising a few of the major karting events.
What are your favorite aspects about the sport of karting? The competiveness of the sport, especially when everyone is running similar time’s.