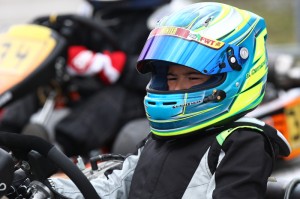 With his sights set securely on the Rotax Max Challenge United States Grand Nationals, Florida resident Derek Carmenate is set to challenge for the victory in the ultra-competitive Rotax Micro Max division. Descending on the GoPro Motorplex facility in Mooresville, North Carolina this coming week, Carmenate will look to carry the momentum gained at last month’s GoPro Summer Shootout and contend for a national championship. Not only will the young AM Engines powered driver be gunning for the top step of the podium, he will also look to top the blocks and be part of Team USA at the Rotax Max Challenge Grand Finals Micro and Mini Invitational later this season.

“The Grand Nationals is an event that we look forward to all year long,” explained Jorge Carmenate. “Ever since the Shootout a few weeks ago, it has been everything that Derek has been talking about. For a young kid, he seems extremely focused to the task at hand.”

Derek will once again enter the annual event as a member of the AM Racing Team and compete in the Rotax Micro Max division, the youngest category in competition over the weeklong event. Utilizing an AM Chassis with an AM Engine, Derek will look to get up to speed early in the week during unofficial testing on Monday and Tuesday. With official practice taking place on Wednesday, Carmenate will get down to serious business on Thursday with qualifying and the first wheel-to-wheel action of the week with the first of three heat races. A pair of heat races on Friday will set the grid for Saturday morning’s prefinal while main events roll off Saturday afternoon with national champions being crowned post event.

A few weeks ago, the up-and-coming champion was at the GoPro Motorplex competing in the GoPro Summer Shootout, the annual ‘unofficial’ test event weekend leading up to the Grand Nationals. Utilizing the event to test chassis and motor setup, Carmenate consistently ran in the top-five throughout the three-day competition. Ending his weekend with fourth and sixth place finishes, the AM Engines pilot feels confident heading into the Grand Nationals.

Jorge continued, “Using the event as a test, Derek’s speed was inconsistent at times but I think that was due to the multiple setups we were testing. Heading to the Grand Nationals this week, we have a good base line and will fine tune from there. I feel very confident that Derek will be able to challenge for the victory.”

Derek Carmenate would like to thank all of his sponsors and supporters for a great 2013 racing season to date. A special thanks to Ariel Castro, the AM Racing Team and AM Engines, TNT Racing, Up 2 Speed Printing and his tuner and drive coach Juanki. Derek would also like to thank his mom, dad and sister for all of their love and support.

For more information and sponsorship opportunities on Derek Carmenate, please visit him online at www.DerekCarmenate.com or contact Jorge Carmenate via e-mail to DadePromotionsLLC@gmail.com