NEWBERG, OREGON (July 24, 2013) – Success is achieved by preparation and knowledge. These two factors are the most important for the Rolison Performance Group when working with each driver under the tent. Thanks to the staff, drivers and their families, RPG stood strong once again on the national stage, gaining a five podium finishes at the recent Superkarts! USA Pro Tour SummerNationals held at the Grand Junction Motor Speedway in Colorado. The new ‘Fearsome Foursome’ that made up the RPG TaG Junior roster on the weekend battled within the lead group all weekend, as did the remaining squad members in their respective categories.

Defending Pro Tour TaG Junior champion Luke Selliken was joined by McKay Snow, Blaine Rocha and new RPG member Austin Versteeg. Saturday was Versteeg’s day as he led the RPG squad and the entire field, picking up the victory. Austin qualified second for the round, and held the position through the heat races to start the main event from outside row one. The first half of the race was spent shuffling for position with a group of drivers, including RPG teammates. By lap nine, Versteeg was able to move up into the lead, taking advantage of some contact ahead of him. From there, Austin extended his lead lap after lap until the checkered flag waved to earn his first SKUSA Pro Tour victory in his debut with RPG. 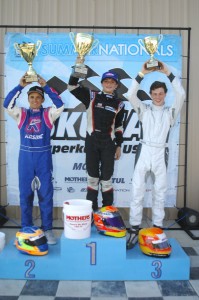 The Rolison Performance Group swept the TaG Junior on Saturday with Rocha, Versteeg and Selliken (Photo: On Track Promotions – otp.ca)

Making it a podium sweep for Rolison Performance Group, Rocha and Selliken finished second and third. Rocha was among the contenders when the event began. Getting shuffled out in the second heat race put Rocha near the mid-pack of the main event. Falling down to 19th on the opening lap of the feature, Rocha put in a stellar performance to put himself back in contention and eventually passing Selliken in the late stages of the race for the second spot, all while recording the fast lap of the race. Selliken put himself in podium contention from the start, and stayed there throughout the day. Leading briefly in the feature, Luke would eventually fall to third behind Versteeg and Rocha to earn his second straight Pro Tour podium finish. Snow slipped up in qualifying and was outside the top-15 but worked his way forward through the heat races and main event. By the end of the feature, McKay was up to the ninth position to put four RPG drivers inside the top-10.

The following day was another heated battle for podium positions in the TaG Junior category, with RPG led by Rocha. In qualifying, Rocha was third in the order and led to the win in the opening heat race. The second heat race saw Blaine drop to third in the order to start P3 in the feature. Shuffled back to fifth at the start, Rocha drove back to the third position. As the race wore on, he continued to chase down the top-two drivers but was unable to track them down before the checkered flag waved. Both Selliken and Versteeg overcame trouble on the day to move up the order. Selliken ended the qualifying session 19th in the order, and was involved in a wreck at the start of heat one. Starting last in heat two, Luke gained nine positions to start the main event inside the top-15. The 18-lap event was a phenomenal performance by the reigning Pro Tour champion, as he fought his way to fourth place, just behind Rocha while recording the fast lap of the race. Versteeg battled engine issues early and just like Selliken, found himself out of contention. Over the course of the day, the young Utah driver overcame the issues and focused on moving forward to end up eighth. Snow was among the top-10 contenders all day but slipped up in the main event to end up 13th. 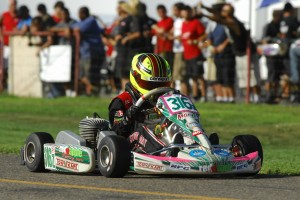 Sting Ray Robb drove to the runner-up finish in TaG Junior in round four action (Photo: On Track Promotions – otp.ca)

Adding another podium finish on the weekend for Rolison Performance Group was TaG Cadet driver Sting Ray Robb. The Oregon driver began the opening day second in the qualifying session but trouble struck in the opening heat race when his chain broke. In heat two, Robb was working his way forward when his chain snapped once again. Before the main event, the RPG staff and his mechanics fixed the issue that was causing his chain to continue to break, but the DNFs put Robb at the back of the field for the start of the shortened main event. Lap by lap, Robb continued to gain positions and reaching the top-10 by the halfway mark. When the checkered flag waved, Sting Ray recorded the fast lap of the race and was in the eighth position to end a strong recovery. Sunday proved much better with Robb standing on the podium in the runner-up position. Qualifying was solid for Sting Ray as he ended the session third. Holding the position through the opening heat race, he dropped to seventh in heat two. He would regain those spots lost in the main event, driving a solid 14-lap race to climb up to the runner-up position, recording the fast lap of the race once again.

Representing the RPG operation in the competitive S2 Semi-Pro Stock Moto was Kory Estell. The Washington driver improved with every session on-track. Qualifying just inside the top-20, Estell was unable to complete a lap in both heat races. Kory overcame the problems to start last in the 37-kart field and advance up to the 18th position, running laps comparable to that of the leaders. Sunday began with Estell qualifying mid-pack again, and drove forward to 12th in the opening heat race. A poor start and some contact dropped Kory down the order and could only manage a 29th finish in heat two. In the main event, Estell showed again he had the speed to compete with the top contenders, driving his way forward. By the opening lap, Estell gained 10 positions and continued gaining more over the 18 laps. At the checkered flag, Kory crossed the line in the 11th position for his best Pro Tour finish of the season.

Parker McKean made his debut on the SKUSA Pro Tour, contesting the headline TaG Senior category. Looking to carry the momentum over from his recent Can-Am Karting Challenge victory, McKean fought strong but was unable to match similar results either day. The day began with McKean starting in the 20th position for the opening heat race, working up to inside the top-15. Trouble struck in heat two as he retired on lap three. Starting 40th in the main event, McKean showed he had the speed to contend with his fast lap just a few hundredths off the best time in the race, fighting up to the15th position after 18 laps. The speed carried over to Sunday as Parker was sixth in the qualifying session to place him in contention. McKean lost a few positions in heat one, placing 10th. Unfortunately, the day would continue to head in the wrong direction as he fell down to the 19th at the end of heat two, then retire early in the main event after to end with disappointing 36tth.

A quick turn around for the Rolison Performance Group as the operation is set for a cross-country trip for the 2013 United States Rotax Max Challenge Grand Nationals. The event is set for July 31-August 3 at the new GoPro Motorplex in Mooresville, North Carolina. A total of nine drivers will compete in the event under the RPG tent. Selliken, Rocha and Snow will be joined by Grant Copple in the Junior Max category. Sting Ray Robb and Sean Groenstein will contest the Mini Max division. Corey Mitchell and Justin Peck are the RPG Masters Max drivers with Thomas Roth in Senior Max completing the roster.

For more information on all the products and services that the Rolison Performance Group has to offer, visit www.rolisonperformancegroup.com . RPG has arrive-and-drive opportunities for the new Rotax Can-Am ProKart Challenge in the Pacific Northwest, which begins in May, the SKUSA SummerNationals and SuperNationals, the US Rotax Grand Nationals and the Pan American Challenge. If you’re interested in being part of this winning program, contact Mike Rolison via e-mail at roli5000@hotmail.com

The Rolison Performance Group is a leading race team and prep shop in American karting, and is also a Rotax Service Center and a Kosmic chassis dealer. Owner Mike Rolison, known as “Roli” at the racetrack, has built a career coaching some of the best kart racers on the West Coast. Over the past decade, he has helped 100′s of drivers and mechanics improve their craft. Mike brings world class driving and coaching experience to every racer he works with. Luke Selliken won the 2012 SKUSA Pro Tour TaG Junior championship as part of the Rolison Performance Group team. RPG provides trackside support and arrive-and-drive programs for many series, including the Challenge of the Americas, US Rotax Grand Nationals, Pan-American Challenge, SKUSA Pro Tour, Northwest ProKart Challenge and the SKUSA SuperNationals. The team is a Kosmic chassis and product line dealer and is proud to campaign karts on the regional and national stage.

Comment about this press release in the EKN Global Members Discussion area below: