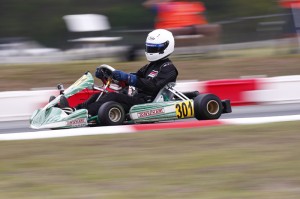 Boca Raton, Florida – Less than a month ago, Roger Ralston Jr. would be a double podium winner at the annual GoPro Summer Shootout and at that point, would set his sights on the Rotax Max Challenge United States Grand Nationals. Returning to the same facility that saw him kick off his quest for a national championship, Ralston Jr. will now enter the prestigious event in his hunt for victory. Competing against the top Senior drivers from across the United States, Ralston Jr. will look to utilize his experience gained at the GoPro Motorplex facility to come out on top.

Descending on the town of Mooresville, North Carolina, just around the corner from the likes of Jr. Motorsports, Penske Racing, Kyle Busch Motorsports and others, Ralston Jr. will be looking to make a name for himself. With more than forty drivers expected to enter the Rotax Senior ranks, the newest member of the Kart Sport North America squad will work hard to ensure that his name is at the top of the time sheets throughout the weeklong event.

“I have my goals set quite high for this event,” explained Roger Ralston Jr. “I have done a lot to prepare for this event both mentally and physically. We have completed numerous test days at the track and I am really shooting for a win. At the very least, I want a podium result and a ticket to the Grand Finals later this year.”

Making the switch to the FA Kart following his double podium results at the annual GoPro Summer Shootout, Ralston Jr. will enter this event as part of the Kart Sport North America team under the careful watch of Team Owner Eric Jones and his tuner Austin Miles.

Ralston added, “The switch to the FA chassis and Kart Sport North America is an exciting one for me. The team has a lot of history and they prove to run at the front in whatever class they compete in. They have a ton of knowledge and with them, I feel that we will be able to achieve our goals next week and onward into the future.”

With unofficial practice taking place Monday and Tuesday, the official event schedule will go into effect on Wednesday morning. With six more official practice sessions before Thursday afternoon’s qualifying session that will set the grids for the heat races, Ralston Jr. will look to get up to speed early. With one heat race Thursday afternoon and two on Friday, points will be accumulated for starting positions for Saturday morning’s prefinal. Main events will take place Saturday afternoon with national champions being crowned at the event’s conclusion as well as Team USA members receiving their tickets to the Rotax Max Challenge Grand Nationals to be held later this year.