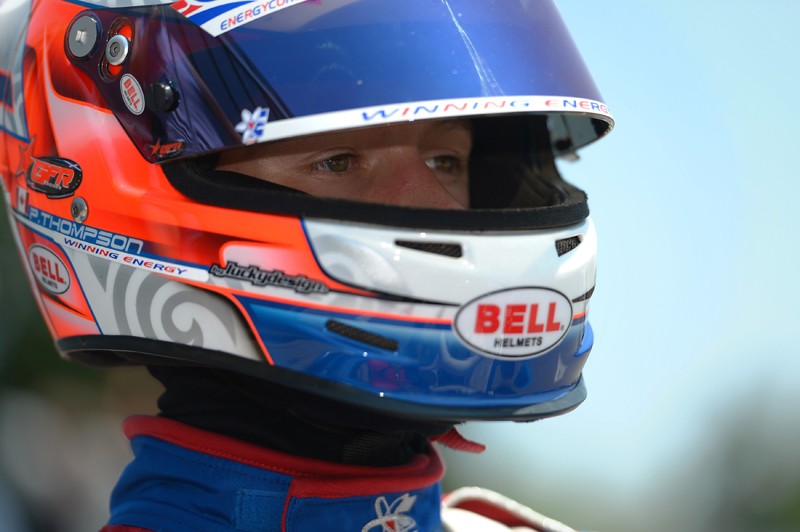 Parker Thompson will look towards his next event after a disappointing weekend in Ortona, Italy
(Photo by: www.KSP.fr)

July 26, 2013 – Traveling to Ortona, Italy to the Circuito Internazionale d’Abruzzo, KFJ pilot Parker Thompson would compete in the second round of the CIK-FIA European Championship. Though the final result was not one that the young Canadian had hoped for, speed and race craft throughout the heat races showed improvement and is something to build upon for future events.

“The track is definitely different than a lot of other European circuits that I have been to this season,” explained Thompson. “A very bumpy circuit with a sand infield and an unappealing layout were noticed right off the bat. Also, the track lacked the amenities that most European circuits have. However, the racing proved to be great as there were several passing opportunities and a place to pass around the entire circuit.”

Competing with the Energy Corse squad, Thompson started his weekend off on the right foot posting the second quickest time of his group in qualifying. Going out later in the day, and with a track that was slowing with each and every session, Thompson’s second place in his group would classify him eighth overall for the upcoming heat races.

Throughout the heats, the talented Canadian driver impressed all by running at the front of the field. Consistently showing his speed and staying out of trouble, Thompson managed to secure second, third, fifth, second and second place results respectively in his five heats. With accumulated points setting the grid for Sunday’s prefinal, Thompson would be classified in the third position and start his prefinal in the second place on the outside of row one.

Looking to try and take advantage of his front row starting position in the prefinal, Thompson and his Energy Corse team took a gamble on gear ratio setup to maximize speed down the long main straight while giving up some bottom end in the infield. Exiting the first complex of corners in the third position, Thompson quickly made a bid for second with a lunging pass down the inside. Successfully completing the maneuver, Thompson, however, lost all his momentum and was re-passed going into the exit of the corner.

Struggling with the low gear ratio, the bold pass by a fellow competitor would send Thompson out into the marbles and he would lose several positions. Getting back up to speed in fifth, the same thing would happen at the next complex of tight corners and Thompson would again find himself out in the marbles.

“It was so hard with the gear we had on,” explained Thompson. “I was trying to advance forward while also defending my position and our setup did not allow for that. After losing several spots on the opening lap, I pushed a little too hard on cold tires and lost the speed needed to get off the corner. With karts all around me, contact was made and I suffered a severely bent axle which took me out of the race all together.”

Post event, Thompson was mentally destroyed with his results. Unable to finish the prefinal meant no advancement to the main event and a loss of valuable points.

Thompson continued, “All we can do now is look towards the next one. We made great strides throughout the weekend and had the speed to win.”

For more information on Parker Thompson including partnership opportunities, please visit him online at www.ParkerThompsonRacing.com or Parker Thompson Racing on Facebook and Twitter @parkertracing.