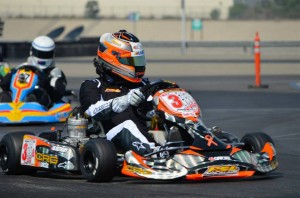 Matt Ostiguy posted a top-10 in his TaG Senior debut this season at the most recent LAKC outing
(Photo: Joe Stalker – LAKC)

This past Sunday, Matt Ostiguy, a PSL SoCal GATORZ sponsored driver competed in his first TaG Senior race this season in the Los Angeles Karting Championship (LAKC) series at the CalSpeed Kart Track at the Auto Club Speedway in Fontana, CA.

Matt started off the morning by qualifying in the 5th position and showed some promising speed before the heat race and main event. In the heat race, Matt was able to get into the fourth position after turn one and held that spot for most of the race until he was passed with only a few laps to go and ended up finishing in 5th.

In the main event, Matt once again gained a spot at the start and a race long battle began with the driver behind. After multiple bump and run attempts by the driver in fifth, Matt lost the 4th position but attempted an aggressive move only a few corners later to regain the spot. During the passing attempt contact was made when the other kart turned into Matt and caused the karts to lock wheels. While the other kart DNF’d, Matt was able to break free and bring the kart home in 10th place.

“I was really hoping for at least a top 5 finish today being the first time racing in the TaG Senior class with a Leopard engine and a great CRG chassis, but after the other karter made contact it just wasn’t possible. I look forward to next month and a better finish, especially with the great CRG/Leopard packages that Francois Doran and PSL SoCal set-up for me.”

Matt Ostiguy has completed his undergraduate degree in Mechanical Engineering (ME) at Cal Poly – San Luis Obispo, CA and is now a graduate student at the same school for his Masters in ME.

GATORZ Eyewear has signed Matt for the 2013 racing season as an official Ambassador and sponsorship: “We are excited to have Matt Ostiguy Racing back with Gatorz for 2013. Matt’s enthusiasm and professionalism are the exact traits we strive for in an ambassador representing our brand. Matt’s hard work and dedication has given Gatorz additional exposure in the Motorsports arena and we look forward to working with him in the year ahead.”

GATORZ is also offering a special 25% discount for all sunglasses purchased online at (http://www.gatorz.com) by simply entering the coupon code: MATT2013 (all caps).